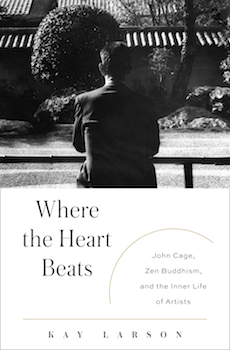 An Uncaged Biography of John Cage

The subtitle of the biography Where the Heart Beats — "John Cage: Zen Buddhism and the Inner Life of Artists" — augured for me a chance to renew my long-held affection for John Cage and Zen, both of which were dear to my heart when I was expanding my mind four or five decades ago. In that era, I’d listen to Alan Watts’s discourses on the application of Zen awareness to Western life, and to Cage’s compositions and his own Zen-flavored anecdotes (the latter recorded, with pianist David Tudor, on the album Indeterminacy). I even witnessed Cage perform his Imaginary Landscape, with an ensemble of helpers and shortwave radios, at the De Young Museum. Was it one of those chance operations, so integral to much of Cage’s work, which put this book into my hands at a time when, like so many of us, I’m craving a blast from the past?

Perhaps. But the publication of the book also coincides with the centennial of Cage’s birth (he died in 1992), a year in which his challenging, perplexing musical oeuvre is enjoying a global resurgence. And although author Kay Larson has herself been a serious student of Zen since 1994, her approach to her subject is much less the religiously-rooted thesis suggested in the subtitle than it is a thorough but fanciful appreciation of Cage’s life and work and how much she shares with him (as do I).

Larson’s insight and enthusiasm are furthered by her experience as a former art critic for the Village Voice and New York magazine, and she illuminates the lesser-known influence on Cage, dating back to at least the mid-1930s, of such modernist visual artists as Duchamp and Kandinsky. Cage, she reminds us, essayed a few paintings himself, and proved an invaluable visionary is his prescient multimedia, multidisciplinary approach to creation, leading to the “happenings” of the 1950s, one of which, Theater Piece #1 at Black Mountain College, Larson describes in lively detail. She also lets us visit several social aggregations of artists, such as the Club in which Cage was a participant in Manhattan a few years earlier, which provided an enviable level of personal support to visionary artists in a variety of disciplines.

What might appear a meandering approach to history, moving back and forth across time and geography, actually renders Larson’s narrative and analysis refreshing and illuminating, validating the significance of the connection between scattered phenomena. And nothing essential to her subject’s biography gets lost in the process. She gives us a glimpse of Cage’s life in Seattle in the 1930s, where he was married to a female former art student, Xenia Kashevaroff, even though he’d had former male lovers and would meet, in that city, his long-time collaborator and the great love of his life, dancer Merce Cunningham. In a masterful act of journalistic juggling (and this is her first book!), Larson manages to balance Cage’s deep personal conflicts with his drive towards personal expression, within much larger issues of the restless evolution of music, dance, and art, and homophobia in the wider society.

In a masterful act of journalistic juggling (and this is her first book!), Larson manages to balance Cage’s deep personal conflicts with his drive towards personal expression, within much larger issues...

Larson likewise juggles forms of exposition. She uses her interviews with still-surviving acquaintances of Cage alongside quotes from Cage’s own writings and lectures, as well as anecdotes from Hindu and Zen spiritual history, and anecdotes about and quotes from Daisetz (D.T.) Suzuki, the most significant of Zen influences on Cage (aside from Alan Watts, whose books Cage read). Elsewhere, Larson prefers to inhabit a fantasy of what it would have been like to be right there with the historical Ramakrishna and several of the acknowledged Zen Masters of old. In places, she adopts a similar “you are there” approach, inside the lives and minds of various 20th Century composers and artists. It all works.

And there’s plenty for those coming to her book with a more strictly musical curiosity, following Cage through his musical education, in which he rebelled against the “tonality” advocated by his one-time teacher, Schoenberg, as well as by his younger contemporary, Boulez. Larson provides ample illustration of Cage’s developing interest in the musicality of the “ordinary”, including both the noise of everyday life and the immutable sounds Cage heard when he shut himself up in the anechoic chamber at Harvard (the high whine of his nervous system and the low throb of his blood’s circulation). The reader is helped to understand Cage’s exploration of “prepared” piano, and the later influence of Zen and of the Chinese Book of Changes (I Ching) on Cage’s varied experiments with indeterminacy.

Moving with Cage into his final decades, Larson examines his influence on younger composers and artists, several of whom she’s interviewed. It’s easy to understand the enthusiasm of such current innovators as Steve Schick, a percussionist, professor at the University of California at San Diego, and a protagonist in this year’s centennial celebration of Cage’s birth. At the time of our phone conversation, Schick had not yet read the Larson tome, but he was eager to learn more about the man whose works he’ll be both conducting and playing percussion in, in a pair of concerts here at Yerba Buena Gardens at the end of October.

“When I look at the roots of notated Western percussion music, the thing I’ve devoted my life to, basically it’s a tripod,” said Schick. “One root stands on Varèse, one on Cage and [Lou] Harrison, and the other on European ideals and Dada in particular [in which Cage himself had a particular interest]. The other thing Cage did for me personally, and for us in general, was to place the responsibility for musical perception as much on the shoulders and ears of the audience as on the hands or vocal cords of the performer. Before Cage, one could reasonably assume that music was a spectator sport, but he really changed the landscape.”

Later in the centennial year, Schick will conduct the La Jolla Symphony in one of Cage’s most famous and often-performed compositions, 4’33”. Though strictly scored, the piece requires the deployment of no instruments. “We’ll be able to open the doors to Mandeville Auditorium [at UC Davis] and let all of the sounds in,” says Schick, with tangible enthusiasm. “We can hear skateboards, and dorm rooms with music playing, and the eucalyptus groves, I’m hoping for a windy night. Then we’ll go into the Eroica, without a pause. I think it’s gonna be shocking! And if you can play the Beethoven Third Symphony and shock anybody,” he chuckles, “I think that’s a good day.”