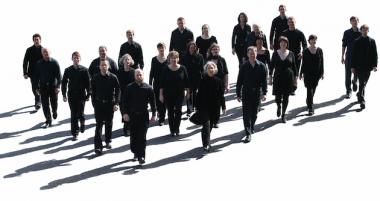 With conductor and Artistic Director Magen Solomon as tour guide, the San Francisco Choral Artists took their audiences on an unusual holiday trip around the world, singing seasonal favorites in 12 languages from 15 countries, meanwhile presenting two world premieres, in a wonderfully executed program with the title “Postcards from Abroad - I’ll not be home for Christmas.”

In geographically, rather than thematically organized sets, the Choral Artists sang a large number of seasonal favorites from (or related to) Armenia, Brazil, Canada, China, England, France, Germany, Kenya, Korea, Latvia, New Zealand, Norway, Peru, Russia, and of course the USA, where the musical journey started and ended.

Magen Solomon, who has been with SFCA since 1995, is more than just the tour guide. She introduces each set with a short talk, and her spoken program notes are chock-full of interesting facts, details and amusing anecdotes about the music and the composers, many of whom she met or personally knows. In her lively and erudite presentations, she draws attention to the structure or texture of the music, and points out little markers that enhance the understanding and appreciation of the program.

As was evident during “Postcards from Abroad” (which can be heard one more time on December 20 in Palo Alto) the Choral Artists are well-versed in almost any language and vocal style; from the strong rhythmic pulse of “Hanacpachap Cussicuinin,” a processional hymn to the Virgin Mary from 17th-century Peru, sung in Quechua, to the tender dissonances of the (Latin) “Ave Maria” by African-American composer Ronald Roxbury (1946-1986), or the ostensible simplicity of Stravinsky’s composition of the same name from 1934-1949.

The choral sound of the SFCA is equally versatile and always in perfect balance, but very controlled — there is no indication that the singers are performing anywhere near the limits of their individual or collective capabilities.

This is in large part thanks to Magen Solomon, who has an extraordinary rapport with her choristers; conductor and singers must have worked very hard in preparation for these “Postcards” concerts, but the performances don’t seem like ‘work’ at all; the music just flows naturally and effortlessly.

The choral sound of the SFCA is equally versatile and always in perfect balance, but very controlled ...This is in large part the work of Magen Solomon, who has an extraordinary rapport with her choristers ... the music just flows naturally and effortlessly.

Former SFCA-member, and current Composer-not-in-residence Wayne Eastwood (b. 1946) was responsible for the first of the two world premieres on the program. His composition “A Russian Christmas Card” is based on a poem by Russian-Jewish poet Joseph Brodsky (1940-1996).

In this piece, Eastwood uses a trio of soloists as a small ‘sub-choir’. The three singers (Emma Rosenthal, Margaret Mefford and Ben West) sometimes perform as one voice and at other times ‘escape’ into their own solos, before the lullaby-like setting of Brodsky’s moody Russian Christmas imagery loosely flows to a soaring climax.

The other world premiere was the arrangement by composer Daniel Afonso, of a melody from the North East of Brazil, where he was born. Afonso, who now lives in Modesto, is Director of Vocal and Choral studies at CSU Stanislaus and also conductor of the Modesto Symphony Orchestra Chorus.

For his composition “A Nossa Lapinha,” he used a folk song that he has known since childhood. It is traditionally performed at midnight on January 6, the celebration of the Epiphany. In the folklore of Afonso’s native region, the materials with which the manger is constructed are gathered and burnt for good fortune. Afonso’s setting reflects both the sadness about the end of the celebration of Christmas as well as the anticipation of the blessings of a new year.

Choosing highlights from the twenty-one individual “Postcards from Abroad” is an arduous task, but a list of my personal highlights must begin with the arrangement by SFCA alto and assistant conductor Tina Harrington of two very different melodies from Georgia, on the edge of Eastern Europe and Western Asia.

Harrington combined (and performed together with Will Betts, tenor, and Tom Purtill, bass) a medieval hymn for the Virgin Mary (“Shenkar Venakhi”) with a Christmas carol in Georgian folk style or “Alilo,” which ends in a spectacular outburst of exuberant cheer.

Tina Harrington also conducted the African musical postcard of the program, “Natufurahi Siku Ya Leo” (Let us rejoice this day) from Kenya, sung in Swahili, which was followed by yet another international gem, “Liná Avatárá” (He Chose Birth Among Us), in which arranger Gil Robbins combines traditional music from the Indian subcontinent with paraphrases from the Book of Isaiah in English, to mesmerizing effect.

Any selection of favorites from a program that contains such a fascinating array of interesting and beautiful choral pieces is, regrettably, bound to be incomplete, but “Postcards from Abroad” made me once more realize that it is my duty as a reviewer — maybe even more than anything else — to be a chronicler who memorializes significant musical events.

Because some of them are simply unforgettable.

(Thanks to Dr. Magen Solomon for graciously making her notes on the program available for this review.)