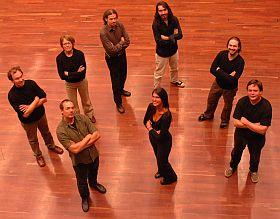 Jonathan Rhodes Lee on April 1, 2008
The young ensemble Harmonie Universelle adopted the title of its San Francisco Early Music Society concert this weekend from a collection by Johann Pachelbel, "Musicalische Ergötzung," which translates into, roughly, "musical pleasures." Indeed, the program from the early German Baroque period offered a smorgasbord of delights, demonstrating how much variety can be discovered within a unified and closely knit repertoire. All the composers on the concert hailed from the 17th century, a period in which famously fiery Italian soloists (such as Dario Castello and Marco Uccellini) exerted profound influence over their Teutonic neighbors. These works did, indeed, speak with strong Italian accents, but tempered melodic flair with contrapuntal density and integrity of individual lines.

The ensemble managed nicely in balancing these two sides of the musical equation, with violinists Florian Deuter and Mónica Waisman finding opportunities for virtuoso fireworks, while managing to join fellow musicians Philippe Grisvard (harpsichord), David Glidden (viola and violin), and Patrick Sepec (cello) for intraensemble antiphony and imitation that they shared with élan. Élan is the right word for the experience, judging by the group's interactions. This is one of those ensembles with a formidable chemistry. The players were wide-awake as they performed, exchanging knowing glances and furtive smiles across the stage. Watching their communication might induce voyeuristic guilt if the musical results weren't so satisfying. However, the very opening of the program made me grit my teeth a bit. The concert's program notes made mention of the influence of the Italian madrigal tradition on Johann Grabbe, whose Intrada, Pavan, and Canzon came early in the concert. I knew what the commentator meant: A top melodic line (played by Deuter) presented motivic gestures that got taken up by the inner voices, which put them through some fascinating evolutions. Unfortunately, the ensemble missed some chances for delighting in this contrapuntal play due to balance issues. At first, I thought that Deuter was just plain domineering, as his lines soared out over the rest of the group and some pretty dull figuration obscured the meaty back-and-forth interplay of the lower voices. Similar balance problems affected a pavane by Samuel Scheidt, which opened the program.

Shaken and Stirred by the Acoustic

As time went on, I decided that the difficulties may have been due to the acoustics on Sunday at San Francisco's St. John the Evangelist Episcopal Church — a quirkily problematic space that might throw the best of ensembles. Indeed, as the program progressed, Harmonie Universelle seemed to settle into the room's eccentricities, and its sound became warmer and better balanced. By the time we heard Pachelbel's second Partita from the Musicalische Ergötzung, I was alternately marveling at the ensemble's rich, dark sound and sitting bolt upright at the rapid-fire, spitting articulations that Deuter and Waisman tossed off in, for instance, the double of the suite's gavotte, which was rife with thorny triplet passages that the players made sound simple. More joys came in another piece by Pachelbel, his fifth Partita. Here, voice crossings in the treble lines gave the two violinists chances to show off their individual strengths: high soaring melodies from Deuter and sonorous, deep-throated tones from the lower registers of Waisman's instrument. The ensemble must also be praised for its programming savvy. I'm a bit biased, since this repertoire is one of my first loves, but even I am willing to admit that a string of Italianate German pieces could become somewhat monochromatic. The group was careful, however, to choose a set that, while hailing from a small geographic and temporal circle, boasted admirable diversity. Works by Pachelbel formed pillars for the concert, and accentuated the unified variety. The second Partita, mentioned above, was so earthy that you could almost smell the beer and sweat as the group ripped through the final gigue. But if we'd just been to the tavern in that work, with the Canon and Gigue in D Major — yes, the Pachelbel Canon of fame (or infamy) — we were transported to one of the lofty academies that marked intellectual and artistic life in the 17th century. This time, though, there were no teary brides to spoil the enjoyment of this compositional tour de force, a three-voice canon atop what has by now become one of the best-known ostinato bass lines of all time. The ensemble zinged its way through the piece (think brides on Rollerblades), giving a nice freshness and listenability to what might otherwise be a tired old standby. For its intelligent programming, consummate musicianship, and affable stage presentation, Harmonie Universelle is a group not to be missed. Let's hope that it will find future engagements in the Bay Area to share more of its musical pleasures with an eager public.