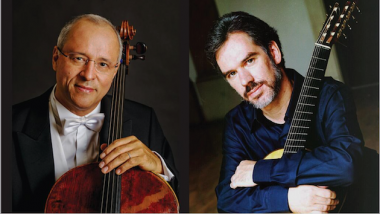 A guitarist is not the first chamber music partner you think of. But the instrument’s little-known suitability to the genre was on full display Saturday evening at Herbst Theater, in a program that highlighted an often-neglected corner of the guitar repertoire. Guitarist Paul Galbraith and cellist Antônio Meneses gave a musically compelling and intellectually adventurous recital featuring the music of Haydn and Schubert, paired with the music of 20th-century Brazilian masters, as well as works written for the duo by contemporary Brazilian composers.

It was a real pleasure to hear Galbraith and Meneses give the entire first half of their program to Classical repertoire. Ironically, the frequently performed repertoire of classical guitarists rarely includes much music from the Classical period, though the great guitarists of the period are starting to get more attention.

Galbraith opened the program with his own transcription of Haydn’s Keyboard Sonata in C-sharp Minor, Hob XVI:36, a serious composition full of Sturm und Drang. The dramatic contrast in Haydn’s first movement is built around an aggressive theme and a soothing reply. The second movement is completely different in character, predominantly light and humorous. The final movement is calm and reflective, with a contrasting songlike and ethereal middle section. At the conclusion, the opening music returns in a mood of serene acceptance.

Without pause, Galbraith followed this opening work with the lively Finale from Haydn’s Keyboard Sonata in E Major, Hob XVI:31. I heard no discernible connection between the compositions, and while the Finale was also beautifully performed, its jollity detracted from the compelling intensity of the Sonata in C-sharp Minor. In all of this music, Galbraith proved a master of stylistically sensitive interpretation, using a wide variety of articulation, dynamics, and color, an admirable rhythmic flexibility, and a profound understanding of formal relations to communicate the heart of this expressive music.

Meneses then joined Galbraith onstage for a performance of Schubert’s Sonata in A Minor, D. 821 (“Arpeggione”). The arpeggione was a hybrid instrument — part guitar, part cello — that never gained popularity, but its name lives on thanks to Schubert’s sonata. Meneses, an internationally acclaimed soloist and former member of the Beaux Arts Trio, played the bowed arpeggione part with the sumptuous tone and expressive phrasing one expects from an artist of his caliber. Galbraith’s arrangement of the original piano part took advantage of his guitar’s unusually wide range made possible by two extra strings.

The second half of the concert was dedicated to the music of Brazil. Clóvis Pereira’s O Canto do Cego (Song of the Blind Beggar) is a solo cello composition written for Antônio Meneses that captures the sadness of life lived on the margins. Meneses’s poignant interpretation awakened empathy and compassion.

Radamés Gnattali was a Brazilian composer with diverse influences; he was the teacher of Antonio Carlos Jobim, and his works are well known to guitarists through performances by Odair and Sérgio Assad. Gnattali’s Sonata for Cello and Guitar is in three movements: first, an “Allegro comodo” which features strikingly beautiful passages where Meneses’s plucked cello accompanied Galbraith’s lyrical guitar, as well as more traditional, passionate cello lines accompanied by jazzy guitar chords; second, an Adagio in a lyrical, cantilena style; and finally, a rollicking “Con spirito” movement which incorporates elements of the folk music of northeastern Brazil.

André Mehmari’s Lyric Suite, or Four Places in Imaginary Brazil is a fantastical reinvention of the Baroque suite, evoking ancient chant, a mythical prankster, a magical tree, a water god, and more. It is a new piece, but Meneses and Galbraith excelled in a highly virtuosic and engaging performance that drew audience raves.

The influential guitarist and long-serving S.F. Conservatory of Music professor, David Tanenbaum, gives us a piece of his mind.

A concerto penned under the auspices of the symphony’s Young American Composer-in-Residence program gets the spotlight in a beautifully balanced program.

An Enchanting Mix of Cal Bach and Guitar

The California Bach Society’s "An Italian Lineage" explored an intriguing mix of composers from the 16th, 17th, and 20th centuries.