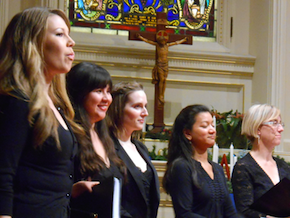 Being a fabulous chamber choir is only the baseline for Volti. On top of that rare distinction, Robert Geary's 33-year-old, 20-voice chorus is a champion of new and American music, a connoisseur of literature, and extensively international in scope and interest.

All those attributes were in evidence at Friday's "The Not-the-Messiah December Choral Concert" in San Francisco's St. Mark's Lutheran Church: Languages ranged from Lithuanian to Spanish to German to Arabic; the poetry set to music came from Paul Laurence Dunbar, Rainer Maria Rilke, Stephane Mallarmé, Paul Celan, and others.

Few may be familiar with Dunbar — I certainly wasn't — but Stacy Garrop's use of his poetry in her Volti-commissioned "Songs of Lowly Life" came as a revelation. Apparently the first African-American poet to gain recognition, Dunbar was born in 1872 to former slaves. Each of his five poems used by Garrop (and one more later in Armando Bayolo's "Cancionero Amoroso") is a stunner.

"Songs of Lowly Life" will be on Volti's next CD, and you should look for it. (Volti's new House of Voices CD is reviewed in SFCV.)

It is an instantly accessible work, piquant dissonances alternating with gorgeous harmonies, and the choir gave its all to the performance. The opening piece, "Dawn" ("An angel, robed in spotless white, Bent down and kissed the sleeping night"), sets the ambiance, but then it is immediately enlivened by "Life" ("A crust of bread and a corner to sleep in, A minute to smile and an hour to weep in"), with a robust, defiant sound.

"Not They Who Soar" is distant, ethereal, the following "Lullaby" is heartbreaking; Jeff Bennett was the fine soloist. Garrop's fetching tonal ambiguity is perhaps the most appealing in the closing "Old." The poem begins with, "I have seen peoples come and go ... I have seen kingdoms rise and fall," and ends with a wistful, yearning "And all, all, all is change I see, So, dearest God, take me, take me."

Bayolo's "Songs of Love" uses Spanish, German, French, and Italian poems, concluding with Dunbar's "Thou Art My Lute." In spite of that variety, the common theme and the composer's use of a similar musical idiom not matching the diversity of poetry limit the attraction of the whole work, although individual songs — especially in Volti's splendid performance — are appealing.

Oklahoma-born Charles Halka spent a Fulbright Grant year in Lithuania, home of his grandparents. He heard Lithuanian folkmusic from his grandfather, Julius, "who sang them for over 50 years after he left the country." Halka's opera is named for that grandfather, and Volti presented a short but fascinating choral excerpt from it, in a West Coast premiere. The 30-year-old composer attended the concert.

"Dipuky — a 'y' is used here for u with a cedilla; the character not available in English — Rauda" (Displaced Persons' Lament) opens with "Baime kausto mintis" (Fear grips the mind), and the Volti singers are spitting "kausto" out throughout the work to give an eerie impression of a speeding train. Aboard it are displaced East Europeans headed to the West, not yet hoping for a better future as "Fear grips the mind, Determination tramples the heart."

David Shapiro's "It Is Time" is yet another introduction to important but little-known poetry, that of Romanian Paul Celan, who survived concentration camp, then lived in Vienna and Paris, where he committed suicide by drowning in the Seine. The poem used by Shapiro was written in German, performed here in an English translation.

The music reflects the ambiguity and gloom of the poem, which begins "Autumn eats its leaf out of my hand: we are friends," and reaches its penultimate crescendo (before its dark ending) in "We love each other like poppy and recollection, We sleep like wine in the conches, Like the sea in the moon's blood ray."

True to form, Volti concluded the concert with a stunning, unusual work, Shawn Crouch's "The Garden of Paradise," a song cycle written to poems by Bryan Turner, a veteran of the war in Iraq. The text is selected from Turner's Here, Bullet — his recollections of service set alongside the poetry of Rumi, the great 13th-century Persian author.

The music ranges from quiet, spiritual passages to gripping dissonances, the work climaxing in a powerful fortissimo accompanying "here is the Garden of Eden / where it is impossible to let go / of what we love and what we've lost."

Turner's word pictures from Iraq are moving with their specificity about life, nightmares, and death in the desert. In "A Soldier's Arabic," between two chorales featuring three women singers set against background sounds from the rest of Volti, the text is:

"The word for Love, habib, is written from right
to left, starting where we would end it
and ending where we might begin.
...
Speak the word for death, maut,
and you will hear the cursives of the wind
driven into the veil of the unknown.
...
This is a language made blood.
It is made of sand, and time.
To be spoken, it must be earned."