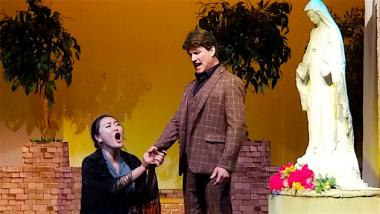 Verismo Opera Shows Vallejo What Cav/Pag Is All About

In our live-tweeted, banality-dominated media climate the uninitiated might be forgiven for wondering where the “real” in verismo opera comes from. In Pietro Mascagni’s Cavalleria Rusticana and Ruggiero Leoncavallo’s Pagliacci, stylized melodrama and stock characters, not to mention the rural 19th-century setting hardly smack of “slice of life” in 2018 California. Huge, star-studded productions of these tales by contemporary, big city companies can struggle to return the flavor of everyday life.

Enter Vallejo’s Verismo Opera, which staged a pared-down but formidable Cavalleria/Pagliacci double-bill on Saturday evening at Vallejo’s Bay Terrace Theater. Verismo’s simple staging and energetic chamber group both supported the bill and the setting excellently, but the dedicated and daring vocal performances across the board deserve the lion’s share of the credit for raising the level of the performance considerably beyond what you might expect from a smaller company.

I quickly learned to appreciate little discongruities such as that between conductor Michael Moran ably filling in a harp part with his cheap (Casio?) electronic keyboard and soprano Cecilia Cai delivering Met-worthy performances of Santuzza’s arias in Cavalleria Rusticana.

How often during an opera intermission do you overhear the following conversation: “Have you been an opera fan long?” “Oh no, I didn’t even know what it was really. I live down the street and just wandered in when I saw the sandwich board outside. This is totally amazing!” With ticket prices around what you might pay for a cocktail at the San Francisco Opera and yet a cast and production team whose excitement at their project was palpable and whose long committed hours of rehearsal evident, it isn’t hard to see how this kind of thing could happen a lot.

You probably know something of the plots of this double bill, and if you don’t, you can probably guess it reasonably well: infidelity, jealousy, stabbings. The standout moments of Saturday’s performance, however, came when the spotlight narrowed around one character’s private plight and a lone vocalist commanded the audience. In addition to Cecilia Cai’s phenomenal Santuzza in the first half of the show, Joe Kinyon’s (Turiddu) fantastic final request to his mother before the duel that will end him (Un bacio, mamma!), Melissa Mallory’s panegyric to avian freedom as Nedda (Stridono lassù), and Josh Bongers’ wellspring of honesty about the tragedy behind his clownish exterior as Canio (Vesti la giubba), all soared and impressed. In terms of sheer charisma, stage presence, and acting, Chris Wells lent something of Jack Lemmon’s electricity and buoyancy to a rascalish Tonio and Steve Kahn’s must be the slipperiest, slimiest Beppe around.

While the singers deserve the highest praise of any aspect of the performance — the costumes, set, and direction all being steady and well-done but quite middle of the road for these works — musicians in the pit also demonstrated the pervasive mood of tenacity and high-octane, rousing performing spirit. In particular, Jonathan Khuner, who daylights as an assistant conductor for the San Francisco Opera, tore through the two very energetic and sometimes challenging piano parts so rousingly and aggressively that I never once longed for the strength of the full orchestra. This surely made Michael Moran’s job with the baton that much easier, but Moran shouldn’t be shorted any credit either, for his calm, consistent, and unflashy directing of traffic.

Few of us will die by duel, I’m willing to wager, or announce one by biting our opponent’s ear. And yet the perpetual Cavalleria Rusticana/ Pagliacci pairing gets as many filled halls as ever, and Verismo Opera did a fantastic job on Saturday of defining the best of “realism” in opera: fiery, heaven-reaching, drunken, despairing, absurdly pathetic, unbelievable in one sense and yet happening right down the street.

This one-off concert production merits laurels for everyone involved.