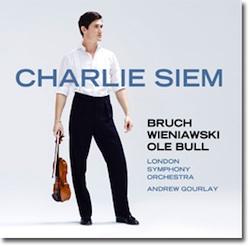 You can’t let your guard down for a moment these days when it comes to string players; close your eyes briefly and another’s turned up on you. Charlie Siem’s recording of Wieniawski, Bruch, and Bull concertante works with the London Symphony Orchestra under Andrew Gourlay is the first I’ve heard of Siem, though it’s his third CD. And he (and it) is well worth hearing, though you might need to wade through a preconception or two as you get the disc out of the package.

There’s a paradoxical affectation about, for example, the way the program notes — and the violinist’s own website, for that matter — call Siem “Charlie” throughout. (Imagine anyone doing the same for, oh, “Jascha” or “Nathan” or “Isaac” or “Arthur” or “David” half a century back.) Then there are the many photos, including the cover image, where Siem is posed for all the world as though he were a male model. (Well, actually, he is a male model, for L’Uomo Vogue among other venues. I give him due credit for being the first classical musician in history to make white suspenders look sexy.)

To take second things first: The Bruch First Concerto, which is the only work here that most listeners are likely to know, gets the kind of performance it almost always does, which is to say that it’s immaculate technically, it’s eloquent in all the right places, and it does just about everything you could possibly want it to do. There are works in which excellent performances are the exception, but this isn’t one of them. The only thing I could wish for is more very quiet playing; even the softest passages in the slow movement seem pitched too much to the balconies.

Yet Siem opens, not with this familiar music, but with Henryk Wieniawski’s First Concerto, which is another thing altogether. The same composer’s Second Concerto is a reasonably familiar beast in concert, thanks to a couple of irresistible tunes, a dashing finale mostly in sautillé (very fast off-the-string bowing), and a high ratio of effect to effort. The First is a different critter altogether, one not often encountered outside the conservatory.

There are two factors here: There aren’t quite the tunes of the Second, and the piece is a technical monster. They’re interrelated, of course. The First Concerto spends enough time showing off extreme violinism as to leave little room for melody, and by virtue of its unreasonable key (F-sharp minor is not where a string player wants to spend much time) makes even those stretches uncomfortable. And the technical demands really are nasty. What other violin concerto opens the solo part with five double-stopped 10ths in a row?

It’s too bad, honestly, because there is a lot to admire in the piece, both in the way it sets up its technical hoops and in the way it integrates them. Anyone who knows the Second Concerto well will recognize certain formulae here; for example, break out your big tune, then go immediately into much faster roulades of pyrotechnics, with harmonic sequences if possible. But Wieniawski repeated it because it worked the first time. It does.

The slow movement, “Preghiera” (Prayer), isn’t a patch on the Second Concerto’s “Romanze,” though in its own way it’s perfect where it is: For four minutes or so, the soloist gets to cool off and play soulful cantabile on the G string. (I remember once resenting that simplicity very much, in a musicianship class where we were all made to sing, conduct, and solmize — that is, sing in do-re-mi syllables — something we were currently studying on our principal instruments. The simplest patch I could find in my current assignments was the first movement of a Handel sonata; a friend was studying Wieniawski 1, and sang the “Preghiera.” He might have had some small difficulties with either of the outer movements.)

The finale is a snappy Polonaise, with a multitude of dotted rhythms that Siem brings off crisply and with considerable swagger. The performance isn’t entirely without strain, but it’s about as close to it as I’ve heard. I continue to wonder, though, how anyone ever got through the work without breaking an E-string (or two, or four) in the days before they were made of steel. Certainly you could not play as aggressively as this and expect four intact strings half an hour later.

The real rarity on the program is a Cantabile doloroso e Rondo giocoso by the Norwegian Ole Bull (1810–1880). Like Wieniawski, Bull was a violinist-composer, who wrote mostly for his own use; in latter years, alas, his most frequent appearances in the public eye have been as a crossword-puzzle clue, and even most violinists know him only as a name. Siem, whose father is Norwegian, has discovered a family connection to Bull, and certainly he gives the work his all. “Doloroso” doesn’t quite describe the opening slow movement, which is richly double-stopped throughout and beautifully played here. The succeeding Rondo is very Italianate, very Paganini-ish, quite intricate technically, and much fun.