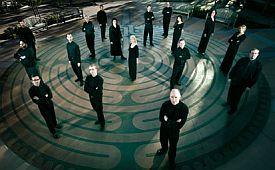 Chelsea Nicole Spangler on October 10, 2009
In another concert series geared toward social justice, the ArtisVocal Ensemble presented an evening of “Kirkenabendmusik” at St. Mark’s Episcopal Church in Berkeley on Friday. The program of Mozart, Haydn, Schubert, and Mendelssohn aimed to invoke the solemnity of a Vespers liturgy in a 19th century Viennese church. This program (repeated on Sat. and Sun. in Oakland and San Francisco) was paired with two nonprofits that operate out of Oakland’s Christ the Light cathedral. The first, The Order of Malta’s Medical Clinic, provides health care for individuals in Alameda and Contra Costa counties who cannot afford insurance. The second is the Legal Justice Center, which helps provide free lawyers for individuals who struggle with domestic violence, disability, housing rights, and immigration issues. By supporting such groups, AVE demonstrates a commitment to the notion that, although, in the words of AVE’s founder Jonathan Dimmock, “the world of arts and the world of social action seem to be diametrically opposed,” they needn’t be.

Under Dimmock’s direction, the ensemble was pared down to only nine singers for this intimate program. Because of the wealth of soprano solos in the chosen repertoire, Dimmock opted to add a soprano to the initially balanced SSAATTBB configuration. In a space as resonant as St. Mark’s, it is easy for an ensemble to sound top-heavy, and the additional soprano sound only exacerbated the problem.

Both balance and blend were issues throughout the concert. The inner voices, standing in the middle of the semicircle, often got lost in the sound. My left ear was overwhelmed by soprano sound, while my right strained to hear the tenors. The standing arrangement may have contributed to the imbalance; I couldn’t help but wonder if blend would have improved had the singers been mixed, rather than organized by voice type.

Though this performance was less polished than last spring’s California Fusion program, it did have its shining moments. Mendelssohn’s Nunc Dimittis was a beautiful example of what this ensemble can do when they are in good form. The humility of the text (Lord, now lettest thou thy servant depart in peace) was reflected by the reverence with which the setting was sung, and the sincerity of the plea was demonstrated by a heart-wrenching suspension that allowed the tenors to milk the audience for emotional feedback. Another highlight of the evening was Mendelssohn’s Drei geistliche Lieder, which featured alto Heidi Waterman as a soloist. Bringing Waterman’s wonderfully rich sound to the fore seemed to warm the timbre of the entire ensemble.

Mirjams Siegesgesang, an almost 20-minute work by Schubert, was clearly the most well-rehearsed piece on the program. It also gave the choir the opportunity to display a greater dramatic and dynamic range than any of the other selections, but for this very reason, it wasn’t particularly suited to the evening’s Vespers theme. On the other hand, the text deals with Moses leading his people out of slavery and poverty in Egypt, to peace and joy in the promised land; the themes worked well with the human rights causes being supported by this concert series.

The story was well dramatized by Schubert, by AVE, and by soprano soloist Helene Zindarsian. The pharaoh’s chariot horses were heard in the piano accompaniment, galloping after the Israelites. The choir noted with hushed awe the parting of the Red Sea, crossed the dry seabed with ever-increasing urgency, and finally voiced the settled comfort of having arrived safely on the other side. In the last of the piece’s five sections, Zindarsian took on a coy, defiant manner to ask “Do you rise, Pharaoh?”

The concert opened with an introit by Mozart, performed by the ensemble’s five women standing in a circle. It ended with the singers turning their backs to the audience and facing the altar area as soprano Tonia D'Amelio sang a plainchant Salve Regina. The fact that the concert both opened and closed with music that was not spatially directed toward the audience served as a reminder that this was meant to be a contemplative Vespers service, and that AVE’s intended audience extended beyond the individuals populating the pews.