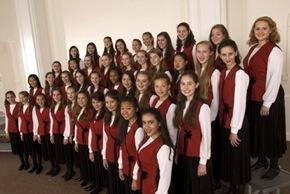 Above and Beyond: The S.F. Girls Chorus Finish the Season With Premieres

High on the list of professional-quality Bay Area choirs is the San Francisco Girls Chorus. Its concert Saturday night at the San Francisco Conservatory showed the girls at their best. Not only are they superbly trained, under Susan McMane’s leadership, they clearly enjoy singing and moving. They make complex harmonies and rhythms look easy and fun.

The chorus has commissioned and premiered a number of works. This year’s premiere was Rimas Tropicales, by Tania León, written in collaboration with poet Carlos Pintado. Complicated Cuban rhythms and extended vocal techniques — like repeated nonverbal syllables, and lines that rise and end in untuned speech — were skillfully performed, enhancing the beauty of the poetry and its musical setting. The chorus will take this gorgeous piece on its tour to Cuba in July.

León, a Cuban who lives in New York, was present. I liked the way she bowed to the chorus first, before acknowledging the audience ovation.

Three other pieces, previously commissioned, were new to this year’s singers, since membership changes each year with graduations out of and promotions into the top performing group. James Meredith’s Natura (from 2003) was done with his Sonos Handbell Ensemble. The text is Emily Dickinson’s poem “Nature, the Gentlest Mother.” At times, the gentle parts evoked Aaron Copland’s setting of the same poem (especially the “rampant squirrel”). Meredith departs from the poem to suggest Nature in her more violent moods, with loud textless singing, whistling, and a clash of bells, gongs, and drums, and then returns to end on the words “silence everywhere.”

Another work using handbells, commissioned in 2005, was Joan Szymko’s Vivos Voco. The medieval texts are lamentations about life and death, from Latin inscriptions on bells, and Julian of Norwich’s English reassurance “All shall be well.”

The Womanly Song of God, a poem by Catherine DeVinck celebrating the joyful creativity of women, was set by Libby Larsen for a commission in 2003. It incorporates stomping and clapping, as well as scatting on African drum syllables (like the snare drummer’s paradiddle), “Dom diggi dom diggity do di dah.” It’s fun to sing, and got a spirited performance.

Chen Yi’s Angel Island Passages, commissioned just last year, is scored for treble voices and string quartet. It is a setting of writings on the walls of buildings in Angel Island, in the San Francisco Bay, where Chinese immigrants awaited their fate. The singers, expressively accompanied by the Cypress String Quartet, faithfully projected the anxiety and homesickness of these people, as well as the emerging feelings of hope for a new day: “I am an American,” they sang. The Cypress players also joined the chorus in Bryan Rosen’s intriguing arrangement of the chorale from Bach’s cantata Wachet Auf, in which the girls sang the chorale but later also sang the instrumental parts.

One delicious item on the program was Randall Thompson’s Pueri Hebraeorum (“Hebrew Children,” a Palm Sunday text). The a cappella setting for double chorus, sometimes alternating and sometimes uniting, is eminently singable. Thompson, writing in the early 20th century, anticipates some of the later repertoire in the program by providing cascading reiteration of certain syllables.

It was interesting to hear the Italian pronunciation of Latin in texts used by Italians, contrasted with German Latin in a chant by Hildegard von Bingen. It used to be that Americans sang church texts in church Latin (that is, Italian), because that was the language of the audience. But since the Roman Catholic Church has abandoned Latin in its services, it has become fashionable in the U.S. to sing in the Latin of the audience for which pieces were originally written. McMane is following the fashion.

Three popular American sacred songs from the 19th century rounded out the program and gave pianist Susan Soehner a chance to lay down some serious boogie. For an encore, the girls sang a medley of San Francisco Songs, choreographed to end, improbably, in a replica of the Golden Gate Bridge. They are definitely ready for their tour.