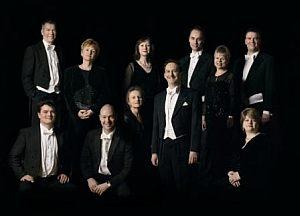 The Tallis Scholars drew an audience large enough to pack the sanctuary of First Congregational Church in Berkeley on Saturday night, reinforcing their reputation as (in the words of a New York Times critic) "the rock stars of Renaissance choral music." Led by director Peter Phillips, the 10 singers filled the space with a sound so powerful that it could plausibly have come from an ensemble of twice the size.

Though the music was a cappella, there was an instrumental quality about it; starting pitches were given by a voice so pure that it sounded almost like an organ. Phillips, attentive to every singer, looked as though he were playing a 10-keyed instrument. The singers responded accordingly, with remarkably precise articulations and melismas, beautiful blend, and dead-center pitch placement. Unisons, often so exact that the 10 voices suddenly sounded like far fewer, were received with appreciative sighs from the audience.

Phillips carefully selects the voices for his sonic palette, combining them to create an array of timbres that convey meaning just as effectively as text or facial expression might. Looking at the group, you would be hard pressed to tell whether they were singing "gloria" or "miserere"; for this ensemble, expressivity is more dependent upon sound than sight.

This program, of music for double choir, was particularly well designed to exhibit the breadth of tone colors the singers are capable of producing. Polyphonic sections called for a degree of individual virtuosity, while instances of homophony demanded overall blend. Dialogues between the two choirs (16th-century stereo technology, as appropriate to "Renaissance rock stars") complemented the interactions of each voice with the ensemble, creating a textural depth that was never static.

The performance space was just live enough to allow the individual voices and parts to be heard. Doubling the sopranos, though, made many of the works quite top-heavy, often rendering the wonderfully rich inner voices nearly inaudible. This became even more apparent after the intermission, when some of the voices began to show signs of fatigue. Tuning was less precise, the tone thinned a bit, and there was some disagreement on vowel shapes and use of vibrato.

Fortunately, several works on the second half of the program used sparser textures, allowing for a better balance. Alonso Lobo's Ave Maria called for only eight voices, highlighting the interplay of different timbres. A quartet section in the middle of Dominique Phinot's Lamentations showcased the men's voices beautifully, and the Magnificat IV by Hieronymus Praetorius afforded most of the voices a degree of independence that allowed them to be heard individually. (The Purcell encore began with alto Caroline Trevor singing alone for two bars, making me wish I had been able to hear more of her throughout the concert.)

Nearly all of the works were settings of Latin liturgical texts that most early music listeners know well. In any case, the Tallis Scholars conveyed the text clearly, even in particularly polyphonic passages. Such clarity often translates to sharp consonants that distract listeners from the music, but that wasn't so here. The consonants were audible, but did not interfere with the vowels, where each note swelled and faded, breathing life into the music.

Entrances, particularly those beginning on vowels, were sometimes unnecessarily explosive. These stood in stark contrast to the releases, which floated almost tangibly up toward the stained glass windows. At the final cutoff, some of the performers lifted their eyes as if to watch the sound drift to the ceiling.

After savoring this sensation for a brief moment at the end of the program-ending Praetorius, the audience demanded more, and was answered with an encore performance of Purcell's Hear My Prayer. The haunting tonality shifts and unsettled dissonance made the anthem a fitting benediction for this very rewarding concert.