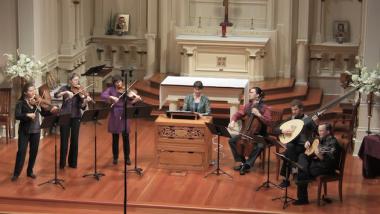 More than 31 million hits since 2007, and close to 58 thousand subscribers from all over the world, puts Voices of Music (VOM) ahead of even The Metropolitan Opera and the New York Philharmonic.

Legitimate bragging rights, therefore. And since good concert highlights only come from good concerts, it doesn’t hurt that the combined resumes of VOM’s musicians read like a veritable Who’s Who (and What’s What) of the international early music scene. The musicians with whom co-directors Hanneke van Proosdij and David Tayler usually work are all first-rate musicians and scholars, with connections to orchestras, ensembles, and institutions worldwide.

Brought together as “An Evening in Paris: Music for the King’s Chamber and the Parisian Salons,” the program included works from 18th-century musical luminaries like Georg Philipp Telemann, Marin Marais, and François Couperin, and also from French composer and organist/harpsichordist Claude Balbastre (1724–1799), to me hitherto unknown.

In the informal and cozy setting of Berkeley’s Saint Mary Magdalen Church, Sunday night’s concert felt much like overhearing a group of friends having a pleasant conversation amongst themselves about all kinds of contrasting topics.

In that respect, the suite from Couperin’s Concerts royaux and Les Goûts-réunis was the perfect microcosmic representation of the subjects and emotions that were being discussed: the sorrowful “Plainte pour les violes,” with Elisabeth Reed and William Skeen both on viola da gamba, against resonant bass notes from David Tayler’s archlute; followed in almost shrill contrast by the jocular and playful “Le je-ne-Scay-quoy,” the solemn “Sarabande grave,” an upbeat “Musette,” and ending in a cheerful “Chaconne légère.”

Most striking about a VOM concert is the restrained, almost casual virtuosity of its players, whether it is Van Proosdij playing a principal melody on one of her recorders or flutes or Derek Tam doing fantastic whirlwind things on the harpsichord in the background. Nobody is showing off, and there is no need to, anyway. Everybody is just doing their glorious best.

Voices of Music’s program culminated in Telemann’s “Paris” Quartet No 6 in E Minor, TWV 43:e4, so named because it is written in the French style, and because it is part of two sets of chamber-music compositions, associated with the composer’s celebrity visit to Paris in 1737–38.

It was a thoroughly delightful ending to an evening of rare beauty.

Styles of Baroque dance are being brought back to life by a new dance ensemble, accompanied by veteran early-music instrumentalists.