In the midst of the pandemic, once more surging in at us for the holidays, Bay Area vocalists refuse to give up, despite the grave challenge that an airborne disease poses for singers. If there are only one or two singers with a small number of instrumentalists, the risks can be controlled, as with Agave Baroque’s recent presentation of “American Originals” with countertenor Reginald Mobley. But the larger the ensemble, the higher the risk of making music together, especially vocal music with its high production of aerosols.

That means that choral groups have had to be creative, and increasingly, they are. Just this weekend I watched a video program of Baroque arias and duets produced by the San Francisco Girls Chorus in collaboration with Ars Minerva. (See our review here.) Predictably, there was little of the ensemble work we would have expected of a choral program a year ago: Each of the accomplished singers was singing alone at home, and the program, nominally centered on Vivaldi’s opera Juditha Triumphans, was necessarily eclectic — and heartwarmingly inventive.

One of the challenges to internet choral programs lies in the very nature of choral music, often contrapuntal — necessitating rock-solid rhythmical integrity — and textually based, with percussive consonants that have to be synchronized, and vowel sounds that have to be blended.

Normally, choirs blend by listening to each other, by singing together in the same room. But we can’t do that right now. We either gather as a virtual choir — singing alone at home and sending our individual sound file to the editor to create the sense of an ensemble — or we link up in real time, online. But if we do the latter, we have to cope with to the “latency” factor — the inevitable and very perceptible internet time delay that makes it all but impossible to match our fellow singers’ sense of time.

One way around this is to change what we sing, as well as how we sing. Saturday evening, Volti, the distinguished San Francisco chamber chorus now in its 42 year, presented a highly effective internet performance of a single new work, it sounds like all my dreams, commissioned from Bay Area composer Anne Hege.

The moving work, in nine sections, radically diminished the importance of text, favoring an instrumental sound to evoke a dreamlike, prelinguistic consciousness. In three sections of the piece, a small group of singers appeared on screen, singing remotely but not on tape — connected electronically at the actual time of the concert. Their voices moved in and out of sync in a kind of dream-time; the unpredictability of internet latency seemed an integral part of the music, rather than an external frustration.

Hege’s music for these “live” sections was intimate, contemplative, and shifting. It sometimes drew on the meditative poetry of Rumi, though text was often barely distinguishable from the surrounding textless vocalization. The singers — in what must have been an unfamiliar and possibly nervous-making choral experience — appeared totally at ease (and in tune), despite the strange technologies. One glitch was a noticeable clipping in these live sections, where the audio interface appeared to be overloaded to the point of distortion.

In two other sections, all 16 Volti singers appeared as a “virtual choir” — that is, as headshots on a screen accompanied by an edited blend of their individual prerecorded lines. Hege’s music for these sections was rhythmic and contrapuntal, based on simple, attractive, intervallic motifs. The singers’ faces appeared in a four-by-four matrix, with added visual effects that let multiple images of each singer diverge, circle, and recombine in a sense of happy dream-play. These lively sections created a sense of communal creativity in the face of isolation — a contrast with the live-voice sections that emphasized the isolation and remoteness of the singers.

The contrapuntal clarity in these virtual choir sections, which reminded me of Baroque music, was echoed by the Bach-like clarity of the piece as a whole. Its nine sections had a structural symmetry: live-choir sections (1, 5, and 9) contrasted with virtual-choir sections (3 and 7), all punctuated by the even-numbered parts, operating like a Baroque ritornello, or returning figure. Here, videos put us in a very different dream-world — looking up at a blue California sky through the branches of a redwood grove.

Hege’s music for these sections was not choral, but electro-acoustic, blending the sounds of wind and (I think) the creaking trunks of trees with sampled and manipulated sounds and moments of melodic suggestion (bells, plucked strings). The whole had a gentle edginess of sound, suggesting that the dreams of humans are anchored in a natural world of trees, wind, and sky.

The concert was warmly introduced by Volti’s artistic director Robert Geary, and followed by an informative Q&A with the singers and composer, as well as the creative tech team: video director Jenessa Joffe and technical director Nicholas Dahlman.

Saturday’s concert consisted only of this one piece, making the concert considerably shorter than what we used to. Normally, if I had gone to this as a “real” concert — put on nice clothes, gotten on BART, found my tickets, greeted friends — I’d have wanted more length, more variety. But like all of us, I have too much screen time in my life, and I was happy to be invited to a compact and engaging program like this.

This production of it sounds like all my dreams is available for watching, free, through Thanksgiving weekend, at http://www.voltisf.org/dreams. Three more commissioned pieces are in the Volti calendar for the season. Next up is a Danny Clay work premiering on December 19. 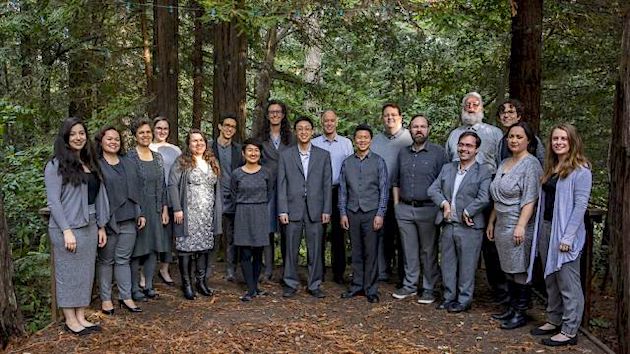 Young Artists Have the Cure for Pandemic Blues

SF Girls Chorus and Ars Minerva team up for Juditha Triumphans and works by Barbara Strozzi and Isabella Leonarda.

The ensemble achieved sublimity in their rendition of a movement from Joby Talbot’s Path of Miracles.

Volti Keeps Singing “Without a Net” or Audience

Oakland Symphony Brings the Violins of Hope to Mahler’s Fourth