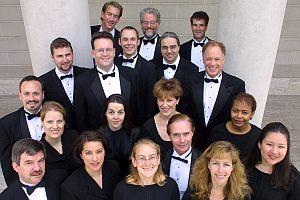 Volti’s Friday concert at Berkeley’s First Congregational Church shared the stage with three outstanding high school choirs: Head-Royce’s Colla Voce, the Acalanes High School Chamber Singers, and Ecco, Piedmont East Bay Children’s Choir. This event was the latest installment of a laudable project that Volti has sponsored for the past decade — an interactive Choral Institute for High School Singers, which takes place every six months “in order to engage high school choirs with young professional singers and contemporary composers.” Friday’s concert was the outcome of one such intensive weekend encounter from last October. West Coast composer Morten Lauridsen was in residence then, and his music figured prominently on this program.

Another of Volti’s ongoing projects, the Choral Arts Laboratory, gives young composers a chance to work with Volti singers and Artistic Director Robert Geary, while they are composing a piece for the ensemble. This year’s participant was 28-year-old Ted Hearne, whose composition titled privilege was also on the program, as were two Volti-commissioned works by Rubin Estrada and Donald Crockett.

All this virtuous outreach produced an evening of beautiful, often sumptuous sound, as well as generally excellent singing from all the groups, before a large and enthusiastic audience. As to the music itself, this was a tamer, blander set of offerings than is customary with Volti. The two commissions were attractive, colorful, and folkloric in flavor, but also rather insubstantial. The same might be said about several of the high school choral selections, though it was a real pleasure to hear the music of Purcell and Sweelinck sung so well.

Morten Lauridsen’s quasi-Renaissance setting of O Magnum Mysterium (1994) was extremely effective, and beautifully rendered by Volti. Its mannered archaisms contain just enough unusual features to create a genuinely thoughtful, devotional mood. His Nocturnes (2005-2008) are set to poems by Rilke, Agee, and Neruda. They ended the concert, sung by the combined forces of all four choirs with the composer at the piano, in a generous and heartfelt tribute.

This program might have benefitted by including one or two of the meatier, more adventurous compositions for which Volti has been noted in the past. Typically, its new-music programming avoids the extremes both of earnest traditionalism and of exuberant novelty. A couple of pieces with real originality and expressive vitality could have enhanced the audience’s awareness, while giving some additionally useful guidelines to a group of impressive young choral singers.