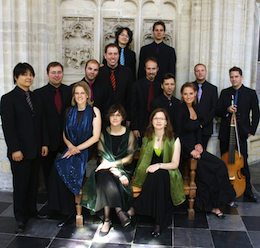 The Berkeley Festival and Exhibition (BFX) aims to be the place where the best early music ensembles and musicians from the Bay Area, the United States and Europe come together, and this year’s impressive list of performers certainly supports that claim.

But from the 2014 edition onward, BFX can also claim to be the festival at which Belgian vocal ensemble Vox Luminis made its exceptional American debut with two magnificent concerts.

In the 10 years of its existence, the ensemble has built a stellar reputation in Europe, and their most recent CD of the Musikalische Exequien (Funeral music) by Heinrich Schütz (1585-1672) was Gramophone’s 2012 Recording of the Year.

Based in Namur, in the French speaking part of Belgium, Vox Luminis mostly consists of singers and (continuo) musicians who, like founder/director and bass Lionel Meunier, were trained in the Netherlands, at the Early Music department of the Royal Conservatory in The Hague.

The intonation is perfect, the voices blend wonderfully, phrasing and diction are astounding.

There is no doubt that being trained in the same early music tradition, and sharing a common musical background contributes in large part to Vox Luminis’ uncanny clarity and precision in everything: The intonation is perfect, the voices blend wonderfully, phrasing and diction are astounding.

But there is also the extraordinary way in which Meunier has tuned the ensemble. First by bringing together singers with uniquely different timbres, but mostly by creating an overarching artistic sensibility that permeates the group and establishes one organic musical consciousness from which the music flows in beautiful, otherworldly weavings.

This consciousness shines through in the music, but also in the way the singers interact during a performance. Meunier leads from within the ensemble but the group has developed such a unique sense of musical space that most of the communication is done by eye contact and an occasional nod. And perhaps telepathy.

This consciousness shines through in the music. Meunier leads from within the ensemble but the group has developed such a unique sense of musical space ... And perhaps telepathy.

As an ensemble, Vox Luminis used the acoustical space of Berkeley’s First Congregational Church to its brilliant advantage, but also played with the physical space during the Thursday performance that I attended.

The concert was built around the Stabat Mater theme of the Virgin Mary lamenting her crucified son and the evening started with an unaccompanied (and uncredited) solo soprano, singing the mournful Lamentation de la Vierge au pied de la Croix by an anonymous composer, from a position off stage.

The soprano’s slightly unsettling visual absence immediately set the emotional tone for the concert, her voice resonating with the overwhelming grief of a mother lamenting the death of her child.

The Virgin’s sorrows were presented in a more operatic way in the Lamentation Virginis in despositione Filii de Cruce by Alessandro Della Ciaia (ca. 1605–ca. 1670), in which Mary’s lament is shared and commented upon by a choir of angels.

But the ultimate treatment of concert theme occurred in the Stabat Mater by Domenico Scarlatti (1685–1757), after intermission, for 10 solo voices and basso continuo. Vox Luminis kept Scarlatti’s music in constant motion, shifting from deep sorrow through sparkling, dance-like episodes, until it culminated in a glorious ‘Amen’.