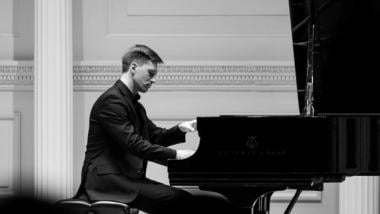 Sergei Rachmaninoff is a titanic figure among the giants of piano playing, not only because of his stature (6’6”) or the span of his hands (a 12th), but because his compositions are even larger than the composer himself. His most famous concertos (No. 2 and No. 3) are warhorses in every major soloist’s repertoire.

Yet, Rachmaninoff also composed numerous pieces on a more modest scale. On Sunday afternoon, Russian pianist Vyacheslav Gryaznov offered a survey of such pieces, in a recital presented by the Steinway Society of the Bay Area.

Gryaznov does not possess the towering stature of the composer but certainly displayed a focused vision and power from the first prelude that opened the concert. 10 Preludes, Op.23 is larger in scale than those of Rachmaninoff’s predecessors such as Chopin and Alkan, or his contemporaries such as Debussy, but they tightly maintain their distinct characters. In the first Prelude, the dark, evocative melodic line was painted in bold strokes, and the slowly quivering tremolo in the left hand created a sense of gravity. The roaring and triumphant second Prelude was delivered with fire, while shimmering notes that fill between gigantic chords sparkled, creating a vivid imagery of an immense fireworks display.

After a pair of relatively calm works, the well-known G Minor Prelude, “Alla Marcia,” was delivered with military precision and mighty power. Even in the most exuberant and explosive sections, though, Gryaznov maintained utmost authority over the thundering chords, with nary a note out of place. As the piece grew, with more chromatic elements thrown in for good measure, Gryaznov displayed exemplary control of different voices, almost as if playing the piano as an entire symphonic orchestra, though ending ironically as if the troop had marched into the distant horizon.

The following Prelude in E-flat Major was a great contrast, with a soaring romantic line typical of Rachmaninoff. The breathless and often halting lyrical line was again drawn in thick, bold strokes, but Gryaznov’s clear, well-articulated rendition seemed to come at the expense of the intoxicating dreaminess that the melody evokes.

Yet by then, Gryaznov’s strengths in interpreting Rachmaninoff’s scores were readily apparent: an immense dynamic range and a clarity of layers buried in a torrent of notes.

The second half of the recital consisted of Moments Musical, Op. 16, an even earlier work before Rachmaninoff fell into a deep depression following the negative reception of his First Symphony. Though youthful, Rachmaninoff’s signature vocabulary of darkness and triumphant lyrical lines is present.

Gryaznov’s rendition of the nocturne-like Andantino evoked moonlight in a dark sky. The piercing melody was carried by pianissimo moments that amplified the coldness of the air. The raging Allegretto, densely polyphonic, was explosive, though the melody was at times lost due to the raging accompaniment.

The dark, pensive Andante cantabile, with its outbursts of anger, was followed by the stormy Presto, where Gryaznov pulled out all the stops. The rapid accompaniment seemed to depict the raging sea, while the right hand delivered lightning strikes and howling wind. The piece seemed to carry Gryaznov well, and the score itself is clear, with well-sorted roles for both hands. Clarity prevailed all the way to the devastatingly destructive fortissimo ending.

A period of calm, the Adagio sostenuto, followed, where Gryaznov let a prayer-like hymn float over a quasi-ostinato in the left hand. But it was just a prelude to the majestic and raucous Maestoso. Gryaznov carried the raging accompaniment in rapid 32nd notes to let the melody soar triumphantly. The piano, by then slightly knocked out of tune, almost created an illusion of vibrato, adding an uncanny resonance to engulf the audience, which was appreciative of Gryaznov’s heroic efforts.

Gryaznov presented two of his original transcriptions as an encore: Borodin’s famous Notturno from his Second String Quartet, and a rich and at times whimsical rendition of “Dance of the Flowers” from Tchaikovsky’s The Nutcracker.

The pianist pushes the boundaries of performance norms in a concert dedicated to his own death.

The startling 15-year-old pianist headlines four nights at Miner Auditorium, and still has some growing to do.

Peter Serkin Pedals His Way Through Mozart and Bach

The piano legend delivers a master class in subtlety and control.