Walt Disney Hall Under Alien Attack in War of the Worlds

We interrupt this review to bring you an important announcement. There has been an invasion of interplanetary proportions! We have reports that the world premiere of a major composition by Annie Gosfield at the Walt Disney Concert Hall Sunday conceived to celebrate the 100th anniversary of Gustav Holst’s The Planets (commissioned by the Los Angeles Philharmonic and the cutting-edge opera company, The Industry) was disrupted by an invading force from the planet Mars.

“Ladies and gentlemen, I hate to interrupt your enjoyment of this wonderful music, but the L.A. Phil wanted you to be aware of some breaking news.” This announcement was made by the concert’s narrator, Sigourney Weaver, approximately 15 minutes after the concert commenced.

Note: The following information may prove unsuitable for younger audiences.

Weaver, who was in communication with scientific and military authorities at three downtown air-raid siren locations, reported in a voice filled with tension, “It seems that several unexplained explosions were observed in the sky just over Los Angeles!” And it has been confirmed that a sizable sonic disturbance did indeed cause considerable trembling in the hall.

In an attempt to complete Gosfield’s premiere, Weaver re-introduced conductor Christopher Rountree and the work’s second movement, evoking the planet Venus. Gosfield’s previous portrait, of the planet Mercury, had fused volcanic tonal effects with the syncopations of a 1930s dance band. But just as bass James Hayden was intoning the section of Yuval Sharon’s libretto that delves into a report in The Star Magazine exposing Elvis Presley’s bisexuality, the hall was rocked by another seismic vibration. Clearly flustered, Weaver returned to the stage and urged the audience to this time, “Truly take note of your nearest exit. There is a possibility we may have to evacuate!”

As reports from three air-raid siren locations were broadcast into the hall, the eyewitness accounts from Professor Richard Pierson, KCRW meteorologist, Dr. Melissa Morse, General Lansing (heading up the military response), and a Mrs. Martinez (owner of La Luna Azul restaurant) made it apparent that the Martian invasion was going to take precedence over Gosfield’s musical portrait of the planets. 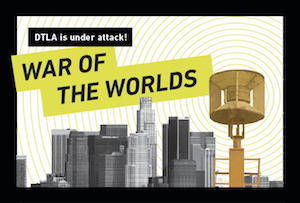 Instead, her music became a boldly evocative mirror of the growing anxiety produced by this “war of the worlds.” There were explosive effects from a vast battery of percussion instruments interspersed with ethereal glimmers, blaring brass outbursts, thundering chords from the organ, radio jamming static, and the otherworldly sounds of a Theremin, the quavering voice of “Red Planet Mars.”

In a desperate attempt to avoid panic, Weaver introduced Los Angeles Mayor Eric Garcetti who came onstage and made a plea for everyone to remain calm. He pointed out the safety features of the hall designed by Frank Gehry (who was in attendance) as opposed to the chaos and mayhem that now reigned outside the hall.

Then, despite the most rigid security measures, the Queen of the Martians, La Sirena, (bearing a strange resemblance to Lady Gaga) appeared. Her message, however, of high fluttering leaps and trills, guttural growls and amazing vocal inflections proved totally unintelligible. It appeared that all was lost. The Martians were truly going to Beat L.A!

It was the polished surfaces of the Walt Disney Concert Hall that reflected the Martian heat ray back on itself and saved the city from destruction. Thank you, Frank Gehry!

This brilliantly produced fake news and musical commentary (which will be repeated at noon and 2 p.m. next Saturday) was created by director/librettist Yuval Sharon; composer Annie Gosfield; “Alien” hunter supreme Sigourney Weaver; conductor Christopher Rountree; and the Los Angeles Philharmonic New Music Group. The onsite commentators were: Hugo Anderson as Professor Pierson, Suzanna Guzmán as Mrs. Martinez, and Hadleigh Adams as General Lansing. The otherworldly figure and interstellar voice of La Sirena was sung by Hila Plitmann. The role of Mayor Garcetti was played by Mayor Eric Garcetti.

In 2016, when the Los Angeles Philharmonic began its three-year collaboration with Yuval Sharon (recipient of a 2017 MacArthur Foundation fellowship), it was in order to create performances like War of the Worlds that stretch the performance envelope by re-examining the dynamics between theater, opera, technology, and symphonic presentation.

In the case of War of the Worlds, the audience in the hall never sees the action or the musical performances that are simultaneously taking place at the three off-site locations. They are “radioed” into the hall in much the same way Orson Welles’s “reporters” from the Mercury Theatre called in their reports from Grover’s Mill on Oct. 30, 1938.

The Industry and the Philharmonic sweated the details, from the questionable verisimilitude of the program notes by Alistair Featherbottom to the live video news feed that greeted patrons as they “evacuated” the hall.

The complex sound design was managed by Jonathan Deans, with David Bullard at Disney Hall, and Jody Elf at the siren locations. The alien costume design was by Jaymee Ngernwichit. The lighting design was by Pablo Santiago.

Tickets are available for two more performances of War of the Worlds at noon and 2 p.m. Saturday, Nov. 18. Admission is free to the three siren locations: Siren 1: 135 S. Olive St.; Siren 2: 416 S. Main St; and Siren 3: 719 S. Hill St. If you attend one of the siren locations you will hear the concert from Disney Hall through the sirens I assume, since I was reporting from the hall.