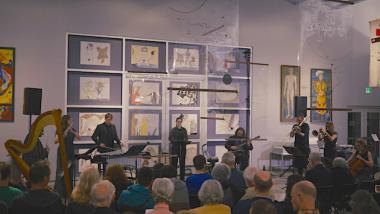 There was no hand-holding during wasteLAnd’s concert at the Wende Museum on Friday, Feb. 7. Titled “Collective Creation,” the program was an array of improvisational pieces, and all presented a challenge to the listener to find their own way through. From Sarah Belle Reid’s elegant graphic scores to a piece by the improv-priestess Pauline Oliveros, the concert called for many species of creation. However, at times it seemed even though the scores, instructions, and intentions of these pieces differed, the resulting music converged into similar sonic areas. Though there are comparatively fewer musical “rules” for improvisation in contemporary classical music than in other traditions, I am beginning to think there are certainly conventions, kinds of musical behavior that are perpetuated by example.

Richard Barrett’s Codex XXIII, the premiere of the evening, was dang hard. Written for the majority of wasteLAnd’s usual stars, the bulk of the piece was a pick-your-own-adventure kind of listening experience. It was nearly impossible to tell what aspect was being improvised and what was being read. Somewhat disconcertingly, soprano Stephanie Aston would indicate a number to the group to change some parameter of the improvisation, but the direction seemed to have no effect on the sound. It was bewildering and cool.

Codex XXIII struck a balance between yelling and humming, sonically. Between attacks from all corners of the ensemble, there was always warm resonance from the ringing harp or the vibraphone, or sweet trombone hanging in the interstices. This made the most chaotic portions of the piece bearable. That sounds negative, but it’s important to acknowledge the underlying difficulty of listening to this kind of work.

The final section of the piece started with Aston speaking the word “sniff,” which was undeniably funny. Humor, lightly salted, also goes a long way in a piece like this. Aston spoke regularly paced words — odd, sad, and funny — while the rest of the ensemble entered on specific words with little farts of sound. Where previously we had to forage, now we could hear everything that was going on, the music handed to us on a platter. Neither is better than the other; just two different ways of eating.

Speaking of eating. Raven Chacon’s work Round (2007) would be a welcome game at any contemporary musician’s dinner party. It even resembled eating a bit: The piece is for a group of people with long kebab skewers that are rigged up to be able to act as a stylus on a record player. The directions for the piece start with “All performers raise their skewers to the sky.” They then dive into the feast — each player acting as their own stylus arm on the record player, playing different parts of the record simultaneously. They applied a host of electronic pedal effects, creating a wild cloud of strains of sentimental old-time music swamped in distortion. I wanted to get in there and monkey with a skewer myself, as I’m sure much of the audience did. That was maybe the biggest draw of all.

The Wende Museum was a wonderful place for this show — Sarah Belle Reid’s transparent graphic scores hanging from the ceiling were easy to mistake for regular pieces of the gallery’s collection. Wilfrido Terrazas’s Torre del Norte (2018) used the warehouse-like main gallery space to great effect, with Sarah Belle Reid and Matt Barbier playing double trumpet and double trombone on opposite sides of the main exhibit hall. Bright but not blaring, the net they wove between them was intricate without chaos. Each turned and played to the cardinal directions, switching seamlessly between the two bells of their double instruments. The changes were patiently paced, to where I could feel the shifts, but not think about them. They sounded like many, many more people than they actually were.

WasteLAnd’s rendition of Pauline Oliveros’s Heart of Tones (1999) had much sharper teeth than many performances of her work. I liked it that way.

Finding roses among the thorns with L.A.’s new-music mavens.