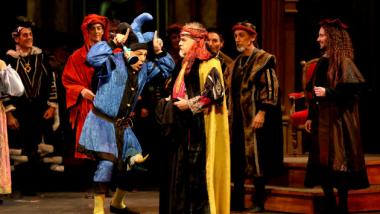 The debate rages on in editorial columns and online discussion forums: Which are better, modern or historical opera productions? Of course, the possibilities are more nuanced than that, but it’s still the wrong question. What matters is not the time period of a production, but the quality of the music and acting. Those can be extraordinary (or awful) whether the action is set in Victorian times or the future of Star Trek.

West Bay Opera seems to disagree, favoring traditionalism over drama. Their Rigoletto, playing at the Lucie Stern Theatre Oct. 16-25, is predictably overdrawn. Too-bright Renaissance costumes complement spray-painted historical sets and blurry projections. All the onstage action is suited precisely to the words, as though the audience wouldn’t understand any unexpected dramatic choices. Vowels are migrated, consonants are inaudible, and voices are over-darkened. Unfortunately, both the Lucie Stern Theater and the West Bay Opera budget are too small for this production’s pretensions. The result is a Rigoletto that fails to dazzle with operatic grandeur or excite with edgy innovation. In other words, it’s boring.

The singers, fortunately, are not.  As the Duke, James Callon showed off a tenor with plenty of exciting ping on his long, top notes.

Not all of the voices in the theater Oct. 16 were fully polished, finished products, but they held plenty of talent. As the Duke, James Callon showed off a tenor with plenty of exciting ping on his long, top notes. He got off to a rough start with “Questa o quella,” but he picked things up from there. “La donna è mobile” was playful and practiced, without the nervous edge of some of the other (possibly less familiar) pieces. A badly chosen final cadenza and the occasional crack were balanced by a glorious last note.

His loving Gilda was sung with verve by Christine Capsuto. She was inconsistent, sometimes sporting floating high notes and lovely trills and sometimes struggling with tonal inaccuracy. She performed best during “Caro nome,” when she was clearly focused on the precision of her coloratura. During quickly-moving dramatic moments, she had a tendency to aspirate and push sharp, but her tone at other times was sweet and warm. Her acting also seemed the most genuine of anyone on stage, as she showed a consistent and credible tenderness for both her father and the Duke.

The most commanding singer on the stage was undoubtedly Krassen Karagiozov as Rigoletto. He deployed his baritone voice to great effect with a wide range of textures. Booming resonance contrasted with suave legato lines and sharply barked taunts. Karagiozov also kept up an impressively consistent limp and hunch throughout his stage time. His gestures and expressions often felt melodramatic in the small theater, but then so did the rest of the show.

In the supporting roles, Phil Skinner made a wonderfully creepy Sparafucile and exited his first scene with an incredible, droned, low F. Anna Yelizarova’s Maddalena was less convincing, with a great, sultry persona but an odd, artificially dark tone. Kiril Havezov mades a brief but positive impression as the wronged Count of Monterone, thanks to his forceful presence and powerful wall-of-sound voice.

The reduced (approximately 20-piece) orchestra valiantly tackled Verdi’s score under Michel Singher’s baton. The playing supported the singers and usually remained inconspicuous, except for some missed notes in the brass section and some legato failures by the flute. The opening sung dialogue was musically messy, but that problem is hardly unique to this production. Dynamics and tempo choices were predictable but serviceable throughout. The men’s chorus put up a good show, staying audible and well-coordinated for all except the fastest snatches of music in the second act.

Make no mistake: Verdi delivered Gilbert-and-Sullivan-Society-style has a certain nostalgic charm. Traditionalist patrons bemoaning the modernization of opera will find plenty to like in West Bay Opera’s production: namely, its musical competence and lack of surprises. But for those who have seen Rigoletto before, or for those who attend the opera for its dramatic power, there’s nothing here to justify a visit.