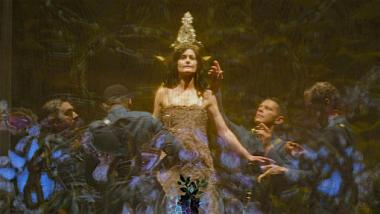 As Edward Said and others have pointed out, the fascination with the real or perceived exotic totters on a dangerous precipice: The “exotic” object, under favorable circumstances and within prescribed bounds, serves as a source of admiration, wonder, and intrigue. But the slightest shift in the wider climate and all that was dazzling because of its difference becomes suspect and deserving of condemnation for the same reason.

Mata Hari, a dancer and courtesan who captivated early 20th-century Europe, learned the brutality of this dynamic as World War I set in and the men who had diverted themselves with her entertainments turned against anything that was not plainly national and martial. The French military executed her in 1917 for espionage charges that historians have found almost certainly trumped-up, if not outright fabricated. Matt Marks and Paul Peers’s opera on the topic, performed yesterday by West Edge Opera at the beautiful converted Craneway Conference Center on the Richmond waterfront, successfully avoids the traditional depiction of Mata Hari as a manipulator or one-dimensional femme fatale. As the character says at one point, she is merely “a survivor.” Matt Marks’s boldly montaged music almost always attracts attention, and at times achieves memorable beauty. Peers’s libretto, though certainly not as well-wrought as the music, remains unassuming enough to let the able performers shape the drama.

The steady, bare stage design, with a bed nearly the only prop, and the sparse orchestration — piano, electric guitar, violin, and accordion — belie the diversity of moods, both musical and dramatic, and the speed with which they’re interchanged. This may be by necessity, in order to fit a fairly complex narrative into a comprehensible 80-minute show, and it could easily be disorienting and sloppy if not handled carefully. But Marks and Peers embrace this challenge and place exclamation points on the hard transitions from starry-eyed to cavernous that mark much of Mata Hari. The decision ends up boosting the character study’s clarity, as the defining traits of Mata Hari in this telling are not so much her famous seductive charms and mysteriousness, but rather her mercurial nature and her naivete. She responds to her tormentors with miserable pleading one moment, acid invective the next. The heart-wrenching memory of her lost child precedes her damn-it-all embrace of execution.

The most effective juxtapositions, however, are those done simultaneously. In one of the strongest scenes of the piece, for example, the hard-hearted Captain Bouchardon, Hari’s military prosecutor — sung brilliantly by Nikolas Nackley — first questions her. Marks and Peers capture the whole central drama of male fascination descending into viciousness by casting the threatening scene as a dance. The music reminds the audience of the sort Mata Hari so recently drew applause for dancing to, while onstage Bouchardon’s forced and increasingly violent dance with Hari establishes his role as the embodiment of the new wartime attitude towards licentiousness.

Almost all of the afternoon’s vocal performers impressed, with Molly Mahoney as the prison nun delivering a tremendous take on a character even more changeable than Hari herself. Michael Grammer, Daniel Cilli, and Daniel Yoder all offered sculpted and confident renderings of the soldiers. In addition to these largely operatic parts, Marks and Peers throw two curveballs: the central character, played by Tina Mitchell, only speaks, and her estranged boyfriend Vadime, played by John Paul Jones, sings exclusively in a contemporary pop idiom. Mitchell, who developed the role for the world premiere last year, delivered not a word without convincing emphasis, be it rancorous, toying, or anguished. Jones, unfortunately, already given one of the weakest vocal parts in the score, distracted with the sole performance offering cause for complaint, missing his pitch not once or twice but regularly.

There’s plenty to Mata Hari’s story that does not get addressed here: the abusiveness of her husband, Vadime’s reason for abandoning her, the specific circumstances of the execution, and her initial self-exoticizing. It would be little surprise, then, if a longer, more developed Mata Hari appeared before long. Still, though Peers’s libretto and direction wobbles now and then, and even adopts the occasional eye-roll inducing gesture (ending predictably with a lone gunshot), a near-universally stellar group of performers and worthwhile, original music from the late Matt Marks make Mata Hari worth the ticket price.