The grief, in Gluck’s 1762 opera Orfeo ed Euridice, gets expressed in relatively few words at first. After promptly dying, the heroine Euridice is lamented in somber music and dance and spirited away to the underworld. Orfeo, left to suffer alone, gets a glimmer of hope when Amore, a love goddess emissary from Jove, offers a terse deal: You can revive and retrieve your dead lover, he’s told, but only if you lead her up to earth without ever looking back at her during the journey. One glance and Euridice is lost to you for all eternity.

Then in a second act packed with frantic recitative, anguished duets, and aching arias, the language tumbles out in a torrent of gripping music drama. Gluck and his librettist, Ranieri de’ Calzabigi, had one idea of how to wrap up the story and satisfy an audience. Others, in telling and refashioning this haunted myth over the centuries, have arrived at different endings.

As if to mimic the back-loaded nature of Gluck’s version, West Edge Opera’s production, at the Bridge Yard in Oakland, comes to bristling life only when the two lovers reunite in the underworld. Orfeo (mezzo Nikola Printz) and Euridice (soprano Maria Valdes) embark on a sustained, emotionally focused encounter that redeems much of what has passed indifferently before. Anyone who considers bailing out at intermission, as some audience members did at a warm Sunday afternoon opening, should reconsider. This Orfeo, musically and dramatically, must be seen, heard, and felt to the finish. Two performances remain, on August 9 and 17.

The opening, to be sure, offers its own intriguing aspects. By casting the nonbinary Printz as Orfeo, director KJ Dahlaw (also nonbinary) signals that something new is afoot. The opera’s story, as Dahlaw writes in a program book director’s note, is “a queer underworld journey” that’s about “facing the ‘demons’ and ‘shadows’ of one own’s psyche.” Rendering the title with an ampersand — Orfeo & Euridice — reinforces the gender-aware linkage of the West Edge production.

Before they get to demons and shadows, the lovers enjoy an idyll, during the overture, that moves from a playful chase scene to some serious deep kissing. And then, poisoned by an asp, Euridice is dead and laid out on a flower-bedecked bier — more like a fancy camp cot here.

Printz brought a reedy, somewhat occluded tone to Orfeo in the early going on opening day. When the mezzo wasn’t getting caught up in the dancers’ circling traffic jams, Printz had little to do but stare out into the house. Soprano Shawnette Sulker’s Amore sounded a little light, but in voice and bearing she projected an air of self-possessed certainty and godly hauteur.

Located next to an eastbound freeway just off the Bay Bridge, the peripatetic West Edge company’s 2019 location is not acoustically ideal. At least for audience members sitting on the stage left side of the house, the singers have to compete with a steady automotive River Styx flowing nearby.

The capable if somewhat under-expressive orchestra and chorus, under conductor Christine Brandes, have larger forces at their disposal in the pit. But even then, the more delicate orchestral passages get a dose of freeway noise.

Most of this two-hour Orfeo’s liabilities vanish after intermission. With Amore serving as a kind of supertherapist and matchmaker, Orfeo and Euridice meet in the Elysian underworld. Valdes, silenced in the first act, seized the moment on Sunday. Her Euridice was by silvery turns anguished and vain, sulky and pleading with a lover who wouldn’t meet her gaze. “Look at me at least,” she sang incisively, edging into coloratura urgency here and there. “Tell me I’m beautiful still.”

She and Printz sparred and yearned for each other, using a single woven drop as a tree or shield to simultaneously hide behind and amplify their thwarted feelings. Dahlaw’s otherwise spotty direction is spot-on here.

Printz was fine, too, all but contorted by a desire to look they couldn’t indulge. After giving in and killing Euridice by looking straight at her, the mezzo’s shining musical moment came in the famous and wonderfully sculpted aria of grief that followed.

In eschewing Gluck’s happily-ever-after coda, Dahlaw and company give the opera a bittersweet, ambiguous torque. The subtlest gesture, passed from one lover to the other, is enough to do it. The West Edge Orfeo & Euridice settles there in some unsettled, unresolved realm. There’s more to the story here than any neat ending can fully apprehend. 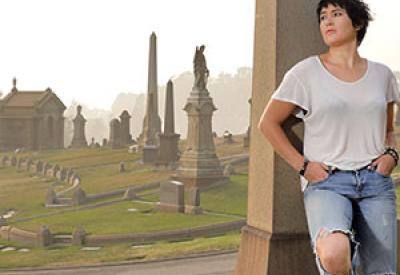