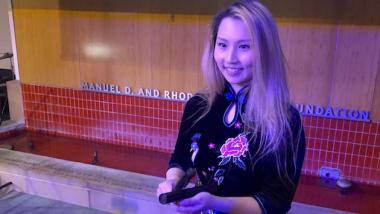 If West Edge Opera’s Snapshot Festival shows anything, it’s that there’s a fantastic amount of energy coming from new and younger writing teams. And there are plenty of performing artists ready to be challenged. In fact, you could say that for West Edge’s entire program, but Snapshot is where the road is bumpiest and least planned. A couple of days of rehearsal, some works finished, others not, no scenery or even props, a few improvised costume pieces out of performers’ wardrobes, everybody reading from scores, and no blocking to speak of. It was pretty raw, and it was still a really good show.

Four opera scenes were on display, all of them from West Coast artists and all of them chamber-scored for the musicians of Earplay, partnering once again with WEO. They covered a wide range of subjects, so comparisons would be invidious. Still, my favorite was Eighteen Melodies for Hujia, music and libretto by Joan Huang.

Huang was one of many musicians caught in Chairman Mao’s Cultural Revolution, and she was sent to the rural west to do farm work. While there, she picked up work songs and folk tunes, which she later combined with the advanced training she received as a graduate student at UCLA in the 1990s. Eighteen Melodies is a 15-minute monodrama about a Chinese princess who was abducted by a steppes tribe. Her family eventually ransomed her, but in the meantime she had borne two children who she had to leave behind.

It’s easy to see how the cycle of dislocation and loss that this ancient princess experienced would resonate so strongly with Huang. The music she has composed for this piece is highly charged, with sharp contrasts and changes of mood encompassing a kaleidoscope of emotions, affectingly performed by soprano Vivian Yau. Huang’s text is comprised of short fragments depicting the emotional states of the captured princess at various moments in her life. Huang alternates sung text with spoken, and the Earplayers were entrusted with transitions and continuity. Percussionist Loren Mach was kept very busy creating an array of sounds from Chinese theatrical traditions and there were incipits of what sounded like folk melodies in the flute (Tod Brody) and viola (Ellen Ruth Rose). But it was really the inexorable sweep of the whole composition that made it powerful.

Gilberto, by composer Nicolas Lell Benavides and librettist Marella Martin Koch, was another piece written from personal experience. The Gilberto of the title was actually Benavides’s uncle, who moved to Oakland from New Mexico in the 1940s and taught ballroom dancing at Sweet’s Ballroom. He was subsequently drafted to fight in the Korean War, leaving the life he had built for himself behind.

It’s a piece about impermanence and uncertainty, artists living in the moment on the edge of a war that is somewhat forgotten in the American psyche. Imagine a cross between La bohème and Bernstein’s On the Town but set in Oakland’s pachuco culture of the 1950s and resurrecting a lot of that very specific slang. Koch’s libretto is natural, although it contains clichés like the innocent hayseed who enters the ballroom looking to learn to dance on the last night before he ships out. Benavides’s music also fits the scene perfectly, with a fetching rhumba doing a lot of the musical work. The cast, led by Nicolas Garcia in the title role, worked hard and represented the work well (and Chad Somers was terrific in the role of the hayseed draftee). But this is one show that would really benefit from a lot more rehearsal time to make the pachuco culture feel more lived in and less like a reference point.

El Canguro is based in Cynthia Lewis Ferrell’s experience of Guatemala in 2007, a year in which the International Criminal Court at The Hague shut down the country’s illegal trafficking in babies for adoption. This is an “issues” piece, and one that is a little too melodramatic for its own good. The scene we were shown had a mother burying a baby, trying to grab another, and arguing with a 15-year-old boy, no less, about relieving the family’s debt situation. In between all this, the characters pause for a lyrical rumination on a children’s folktale. I thought of how Ellen Reid’s Prism avoids this problem by structuring the piece around memory rather than a graphic portrayal of the actual trauma. That might be something for the authors to think about working into this piece as well.

Peter Michael von der Nahmer’s music is quite busy and layered with lots of different influences. He knows what he’s doing, but in the scene we saw, there’s so much going on that the music is often underlining the dramatic action. It seems like a good score that needs revision to work. Mezzo-soprano Tania Mandzy Inala and soprano Maya Kherani were excellent, but it’s almost impossible to make a heavily emotional scene like this one tell without any of the build-up.

Moon, Bride, Dogs was put together by UC Davis students Cristina Fríes (libretto) and Ryan Suleiman (score). In some ways it’s the most interesting of all the shows here, but it also has the rough patches of newbies to the opera game. Fríes’s libretto comes ultimately from a Charles Perrault fairytale about a princess (soprano Aléxa Anderson) who runs away from her father who wants to marry her himself. But Fríes has sensibly removed most of the context and focused on the fleeing, treating it in a more mythical way, with the Moon (tenor J. Raymond Meyers) as a character/guide and a pack of dogs (played by a more comical than threatening Jason Sarten) on her trail. If the libretto has the patina of an MFA seminar, that’s less important than the fact that the words and the music fit very well together. Fríes gives Suleiman a lot to work with and he runs with it.

Suleiman, too, is practicing, and some of his ways of setting text (repetitions that devolve into spoken whispers, the “whuh ... whuh ... what” of the dogs) also smack of classroom lessons. But Suleiman has a lot of strings to his bow, particularly a fine gift for melody. His leitmotives stick in the mind the way a good motive should, and one of my audience neighbors ended the night singing “Idiot girl,” one of the most instantly identifiable musical bits of the night. There were tons of good scoring ideas and a totally natural way of blending voices together. The ensemble moments flowed from the text and dramatic situations perfectly. There’s a lot to admire in this work; possibly this writing team will surprise us in the future — that is, unless you heard Moon, Bride, Dogs this past weekend.

NB: Correction: As originally published, this article mixed up Nicolas Garcia and Chad Somers in Gilberto. It was actually Garcia who portrayed the title character with Somers in the role of the draftee.