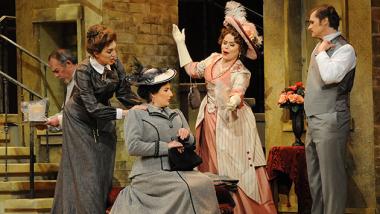 Where Angels Fear to Tread Loses Its Way

Mark Lanz Weiser’s 1999 opera Where Angels Fear to Tread, which received its professional premiere at Opera San Jose on Saturday, seemed to have everything going for it on paper. Its source, E.M. Forster’s 1908 novel, is considered a masterpiece, a scathing portrayal of bourgeois English hypocrisy and close-mindedness. Beyond this, the novel's plot tells an almost operatic story.

On a tour of Italy, the widowed Lilia Herriton becomes engaged to the handsome, local youth Gino Carella. Ashamed of her impetuous behavior, Lilia’s family send her brother-in-law Philip to thwart the couple’s plans for marriage. Philip is unsuccessful, but eventually finds himself again attempting to restore the family’s honor when Lilia dies in childbirth, leaving her son in the hands of her Italian husband. Philip, along with his sister Harriet and family friend Caroline Abbott, must “save” the child from what they see as a fate worse than death — growing up all’Italiana rather than as an Englishman.

Librettist Roger Brunyate, who met Forster while a student at Cambridge, explained in his program note that one of his main goals in adapting Angels to the stage was “liberating the passion.” Yet what resulted was a mere reduction of the novel to a gushy soap opera.

… What resulted was a mere reduction of the novel to a gushy soap opera.Part of the appeal of Forster’s writing is the dry wit and sarcasm of his characters — they take pains not to let others discover their true feelings. Passion is reserved for moments of private contemplation in his novels. Yet in the hands of Brunyate, the characters shed their British stiff upper lip and become sappy sentimentalists who prattle on about sunsets and stars.

Lanz Weiser matched the high degree of romanticism in Brunyate’s score with, in his words, a “neo-romantic approach to the musical vocabulary.” While that option has always been available, even in the modernist 20th Century, it takes a great deal of creativity to work in a romantic  idiom; otherwise, a composer runs the risk of churning out bland and trivial melodies.

Such melodies abounded in the orchestral interludes and love duets of Lanz Weiser’s score. How many times can you swell to a luscious string climax before it starts to lose its dramatic power? How many times can a harpist play a glissando before her fingers start to bleed? Lanz Weiser’s sound world showed little timbral or textural variation; it is hummable but ultimately unmemorable.

Lanz Weiser’s sound world showed little timbral or textural variation; it is hummable but ultimately unmemorable.There were one or two successful parts of the opera. While Brunyate and Lanz Weiser are sub-par dramatists, they proved themselves to be comedic masterminds in the Act I finale. In an interview with SFCV, the composer expressed an affinity for Mozart. Act II of Figaro seems to have served as a model for the Act I finale of Angels, which utilizes the same technique of adding characters to the scene one at a time until reaching a confused and crowded climax.

Yet in their addition of one particular character to the chaos, Lanz Weiser and Brunyate rushed in where Mozart and Da Ponte never dared to tread — a singing dog.

Seriously. With the arrival of an Italian prima donna on the scene (played with Musetta-like exaggeration by soprano Jennie Litster), an endless parade of luggage was hauled in, including a basket containing a tiny, pink-collared mutt. When the ensemble reached its climax, the dog actually joined in, repeatedly howling two distinct pitches about a third apart that seemed to be in tune with the singers. The moment was hilarious, adorable, and awe-inspiring all at once.

Among the other performers, only mezzo Lisa Chavez in the role of Philip Herriton’s matronly sister Harriet claimed distinction. Chavez perfectly embodied the kind of domineering “woman of a certain age” that became an archetype of 19th and early 20th century British theater and literature. In her entrance aria, a bigoted tirade near the beginning of the Act I finale, she fell back on the weightiness of her voice and exaggerated the shrillness of the upper mezzo in order to stress the bombastic pomposity of her character.

No one else had quite the same stage presence as Chavez (or the dog, for that matter). Soprano Christine Conover as the naïve Caroline Abbot had a marvelously clear voice, though she was unsurprisingly stiff in the cardboard role she was given to play. Ditto for tenor Kirk Dougherty as Philip. Matthew Hanscom seemed a bit too old to play the strapping lad Gino, and his caked on Mediterranean “tan” was absurd.

Director Lillian Groag did all she could with Angels, but in the end she was dealing with a highly flawed work. Just as Michael Ganio’s sets were an Olive Garden-like simulacrum of Italy, the opera was an unconvincing imitation of real emotion and drama packaged in a palatable neo-Romantic score. If Lanz Weiser and Brunyate ever partner again, they should stick to comedy.

Opera San Jose will present additional performances of Where Angels Fear to Tread at the California Theatre on February 12, 15, 20, and 22.