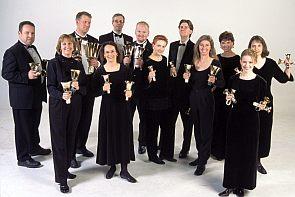 For Whom the Bell Tolls

The San Francisco Chamber Orchestra likes varied and unusual programs. Saturday's free concert at St. Mark's Church in Palo Alto was perhaps a little more unusual than most. The program, led by SFCO Music Director Benjamin Simon, featured two clarinet concertos and a handbell concerto, and the shortest piece was by Gustav Mahler, a composer not noted for brevity. The unsuspecting composer of the handbell concerto was Johann Christian Bach, the son of Johann Sebastian who moved to London and wrote elegant, courtly music that influenced the young Mozart. The innocent victim was a harmless keyboard concerto (Op. 13, No. 4, in B-flat major), embellished — if I may so put it — by James Meredith for his group, the Sonos Handbell Ensemble.

In Saturday's concert, 12 players lined up at tables behind the orchestra and waved their 165 bells around, often three or four per person at a time.This proved that a handbell ensemble could play a keyboard part in a concerto, but not that the result would be successful. The form wasn't really designed for this instrumentation. Even compared to the clunky, unresonant early pianos that Bach had at his disposal, the handbells sounded muffled and of inconsistent volume. The lower notes, in particular, produced only clapper sounds. Any timbre was swallowed up before it crossed the orchestra.

Imagine a performance on a tinny, poorly maintained clavichord. Yet the players also produced some impressive effects with their unlikely battery. Many of Bach's trills rang out clearly, one bell in each hand of the lucky player. Keyboard runs up and down the range were especially dazzling.

The ensemble fared best in its unaccompanied encore, featuring a couple of songs, including Gershwin's Summertime, in arrangements better suited to the handbells' strengths. Like J.C. Bach, clarinetist Dimitri Ashkenazy is the son of a famous father — conductor and pianist Vladimir — but, also like Bach, he prefers to stand on his own merits. These are considerable.

His playing is less notable for its tone, which is well-controlled yet a little rough by clarinet standards, than for its expressiveness. He applied deep consideration to his two concertos, by Aaron Copland and Richard Festinger. Copland's Clarinet Concerto, written in 1948 for Benny Goodman, is mostly in the composer's American pastoral style, welcoming a touch of jazz inflection here and there.

Ashkenazy applied a few bent notes in the cadenza and in the distinctive passage where he's accompanied by a solo bass player (Michel Taddei) slapping the strings against the fingerboard. He showed what more he could do in his encore, an excerpt from Artie Shaw's Concerto for Clarinet that ends with a coruscating glissando. Overall, Ashkenazy and Simon led us on a fairly slow, finely balanced journey from Copland's quiet opening, through the hinge of the central cadenza, and into the faster-paced finale.

Richard Festinger's Equinox for clarinet and chamber orchestra received its premiere at this series of concerts. Festinger, a music professor at San Francisco State University best known for his association with the new music ensemble Earplay, is the same age as Copland's concerto, and he modeled his work on its great predecessor.

At 22 minutes, Equinox is slightly longer than the Copland. It has the same general structure and almost the same orchestration: strings, harp, and piano, to which Festinger adds one player's worth of percussion. The differences, though, are significant. Festinger's slow opening movement has faster passages, which Copland's lacks; and his cadenza is purely contemplative, instead of forming a transition to the finale. Festinger writes in an atonal idiom, striving for a lyrical sound similar to Alban Berg's, rather than clashing dissonances. This approach was well-suited for the soloist. Although lines sometimes sat uncomfortably in the clarinet's range, and attacks could be rough, Ashkenazy carried his part with fluency and character.

To my ear, Festinger's music is most interesting in rhythm. Varying textures and patterns for different instruments give variety and interest to the strings. The piano and percussion (Lori Lack and Chris Froh, respectively), especially the tubular bells, were well-integrated. Rhythmic figures were passed around and elaborated on. Ashkenazy introduced one that was promptly picked up by solo violin (concertmaster Robin Sharp), then viola, then harp and xylophone. Then the clarinet extracted a different one from the running string accompaniment. Such moments are a delight to the intellectual ear.

And the Mahler? That master of the massive ensemble wrote one piece well-suited for a chamber orchestra. It's the Adagietto ("little Adagio") from his Symphony No. 5, a quiet interlude for strings and harp. Simon showed sensitivity to Mahler's tenuous changes of mood, and he took the slow tempo direction seriously. The performance lasted 11 minutes, on the long side for this movement.

At that pace, carrying Mahler's emotive lines with subtlety was difficult for this orchestra. The violins wavered, and Daniel Levitan's harp was intrusive. The best work came from the three-person cello section, led by Eric Gaenslen. They were better than the cellos of some orchestras far more costly to hear.