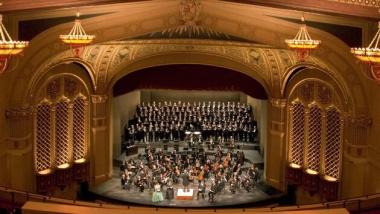 Symphony Silicon Valley’s concert on Saturday, at the California Theatre in San José, featured the orchestra’s own principal clarinetist, Michael Corner, as the live-wire soloist in Mozart’s Clarinet Concerto in A Major, K. 622, one of his late masterpieces exploring the capabilities of this then relatively new instrument. Corner, who’s been with the orchestra and its predecessor for 35 years, combines experience with spiritedness.

While the chamber orchestra behind him — just 30 strings, winds, and horns, under guest conductor William Boughton — kept cool and calm, with just the amount of bounce needed to keep Mozart lively, Corner unleashed a remarkable mixture of legato elegance with emphatic drive, even drama. He exploited his instrument’s well-known capacity for a wide variety of timbres. His low notes were resonant and echoing, his high notes soared out like high-shot arrows or occasionally meteors, and his middle was a reminder that the clarinet was named for the clarion trumpet that early versions reportedly sounded like.

Even when playing as quietly as possible, as in the return of the main theme in the Adagio, Corner leaned on his notes, giving them a variety of character.

Overall, it was a bold and beefy rendition of a grave and courtly Mozart work. I began to wonder what a Beethoven clarinet concerto from a decade or so later than this piece, around 1802, might have sounded like.

After intermission, with Corner reclaiming his usual seat as principal clarinetist — an unusual thing for an orchestra member to do immediately after a taxing solo turn — the full-sized orchestra turned in a similarly bold performance of Mendelssohn’s “Scottish” Symphony in A Minor, Op. 56. This dramatic scene-painting work is the most epic symphony of its musical generation, after Beethoven and Schubert but before Brahms and Raff. Boughton led a performance dedicated to affirming that status.

The first movement was firm and surging, with the rough-hewn and ruthless logic of Beethoven’s “Eroica,” and a brief storm scene more like the one in Rossini’s William Tell Overture than the one in Beethoven’s “Pastorale” Symphony. The Scherzo ran eagerly, jumping and tumbling through its motives. The gentle main theme in the Adagio contrasted with everything else in the movement, especially the wind choir’s boldly martial display of the second theme. That same wind choir cried and moaned eloquently in the passion of the finale.

The concert was bookended by two pieces from Mendelssohn’s music for A Midsummer Night’s Dream, opening with his precocious overture and closing with an encore in the form of the Nocturne from the later incidental music.

The overture was more refined than anything else on the program: crisp, clear, and delicate, with unusually clearly audible pizzicato in the violas underneath the elfin main theme in the violins. The Nocturne, by contrast, belied its title with a mood of intense urgency, particularly from the two rampant French horns that open the piece.

Overall, there was a certain amount of musical rampage on display, deliberate and essentially controlled, but worthy of a less polished orchestra than SSV. But the concert made up in vividness what it may have kept restrained in the way of finesse.