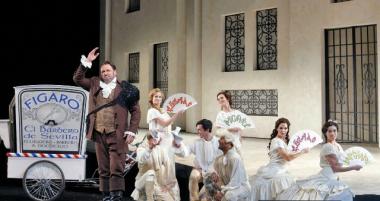 A Winning Barber And a Whimsical Seville at San Francisco Opera

San Francisco Opera’s The Barber of Seville takes its inspiration, appropriately enough, from its title. Two things stand out about this production: Lucas Meacham’s charismatic Figaro and the timeless, colorful Seville envisioned and realized by the all-Spanish production team. The result is buoyant and engaging, despite an uneven cast and some blocking missteps.

As Figaro, Lucas Meacham drew all eyes whenever he entered the stage. He delivered every line with such naturalness and variety that he seemed to be thinking them up in the moment. This barber-matchmaker has ingenuity, guts, and an endearing ability to laugh at himself, so for once, his claims of the demand for his services hardly seem exaggerated. He also has a strong baritone with a warm top and an excellent facility for delivering patter at breakneck speed. His oft-migrated vowels were a small price to pay for an otherwise-perfect Figaro.

Daniela Mack wisely kept Rosina as far as possible from a simpering ingénue. Her colorful costumes in a beige world, her gleeful trick-playing, and her rich lower range all showed that she had sass and spine to spare. Mack also has the vocal goods to deliver on the role’s coloratura, offering fast and high variations on “Una voce poco fa” while respecting and frequently returning to Rossini’s original line. It’s a rarity and delight to hear the role sung in such a rich, grounded mezzo voice without sacrificing any of the impressive vocal fireworks audiences expect.

René Barbera’s Almaviva was the weak link in this trio of leads. He had the dashing-tenor-throwing-money-around air down pat, and his bright high notes were glorious to hear. But his voice carries too much vocal weight for a role that demands so much agility. While he managed to execute his many quick passages with technical accuracy, the transitions between notes were strained and the line of the voice was rarely smooth.  It’s especially strange, therefore, that he got an extra coloratura-filled aria, the usually cut “Cessa di più resistere” in the second act. (San Francisco audiences will be familiar with his rendition of this piece; Barbera played Don Ramiro in La Cenerentola, where the aria also appears, in 2014.)

The three supporting roles were ably filled. Andrea Silvestrelli’s height and booming, cavernous bass voice both served him to great comedic effect in the role of Don Basilio, especially in his delicious “La calunnia è un venticello.” As Doctor Bartolo, Alessandro Corbelli was the model of a comic bass — vocally solid, but focused on character. He wasn’t afraid to manipulate his voice or shout his lines, if the moment called for it. Finally, Catherine Cook got a brief star turn as the housekeeper, Berta. Her resonant voice found a distinctive place in the ensembles, and her obvious exasperation with both Rosina and Bartolo, plus her opportunistic plan to enjoy whatever time remained to her, provoked lots of laughs.

After some brass missteps at the beginning of the overture, the San Francisco Opera Orchestra played well under Giuseppe Finzi’s baton. The music continued at an appropriately brisk pace. Finzi kept things playful, with a light-handed approach and lots of room left for the singers and instrumentalists to exaggerate the score, as befits such a silly opera. While the singers were not always clearly audible, the set and staging were at fault, not the orchestra.

The acoustics, in fact, are this staging’s biggest flaw. The set leaves much of the stage empty, so voices coming from upstage can get lost. This is worsened by occasional awkward bits of blocking that call for the singers to face away from the audience while delivering recitative. The first conversation between Almaviva and Figaro was particularly inaudible.

In all other respects, director Emilio Sagi’s production, revived by director Roy Rallo, is delightful. A white and beige palette slowly gives way to bright hues as the lovers’ schemes succeed. Rosina leads the transformation, her Technicolor dress foreshadowing the celebration at the end of Act II. The time period is ambiguous; Pepa Ojanguren’s costumes are traditional, rural dress that could belong to any decade of the last couple centuries. Only Almaviva’s flashy car in the finale implies a semi-modern setting. Gary Marder’s lighting lends extra fun to the production, with romantic mood lighting for the serenade (which gives way to sudden, harsh daylight when Rosina’s response is interrupted) and red-and-green-bulbed chandeliers in Bartolo’s house.

The blocking is also generally clever and deftly executed. The Act I letter-for-laundry-list exchange is so smoothly arranged that audience members who blink will be as surprised as Bartolo by the result. An opportune use of the orchestra pit has ladders appearing there as a plausible escape from the impasse of the first act finale. Flamenco dancers moving props, serving coffee, and forming crowds keep the stage bustling, even if they sometimes draw focus away from the principals.

Quibbles aside, this is a production that accomplishes its aims. The Barber of Seville is supposed to be frothy and fun. At San Francisco Opera, thanks to some great stars and a lively staging, it is.