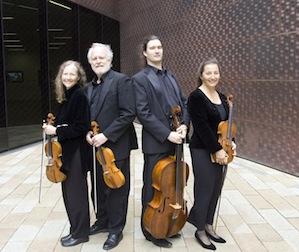 It should come as no surprise that the repertoire of the New Esterházy Quartet (NEQ) works more or less outward from the works of Franz Joseph Haydn — the Esterházy family’s most esteemed employee — to those in Haydn’s orbit. On Friday evening at Berkeley’s Hillside Club, the group played string quartets by Haydn (sometimes called the “father” of the genre) and by his students Joseph Leopold Eybler and Ludwig van Beethoven. The program’s tacit theme seemed to be that feature for which Haydn’s quartets might be best known: wit. NEQ relished the opportunity to engage these three composers’ manipulations of musical convention.

Viennese music composed in the last few decades of the 18th century is the backbone of instrumental repertoire. The first half of the concert juxtaposed two such works. NEQ’s perfect tuning and sensitive phrasing made the clean textures and conventional harmonic patterns shimmer in Eybler’s Quartet in C Minor, Op. 1, No. 2 (1794). Eybler at times flipped the cello into an alto range, as Mozart does in his more famous “Prussian” Quartets. NEQ’s cellist, William Skeen, was challenged early and often in this manner but handled the passages with ease. The players rendered the second movement, Adagio, with exceptional poise, trading motifs while maintaining balance between their instruments. The evening’s most surprising movement may have been the concluding Allegro, whose furious polyphony was still sprinkled with humor.

Not that NEQ’s Haydn offering was wanting in wit. The Quartet in G, Op. 64, No. 4 (1790), was occasionally squeamish yet immensely appealing. NEQ supplied the minor-mode interpolations and sporadic playfulness of the opening allegro with sufficiently dark timbre and responsive articulation. In this work Haydn switches the minuet and the slow movement, as Mozart did eight years earlier in his own Quartet in G, K. 387 (1782) — the first of his so-called “Haydn” quartets. In the misplaced minuet, first violinist Kati Kyme commanded an impressive dynamic range (as she did on the entire piece). The following Adagio lived up to its cantabile billing. During it the ensemble maintained good tuning while navigating gnarly modulations through distant flat keys. NEQ looked to be having the most fun on the concluding Presto, in which Haydn still denied the big finish that the 6/8 jaunt easily could have delivered.

The second half of the concert was dedicated to Beethoven’s Quartet in E-flat, Op. 127, often thought of as the first quartet of his “late” style. While it may not be considered his meatiest essay in the genre, it still feeds a family of four. Slow introductions were not without precedent even in the string quartet, but the opening maestoso still lends unusual weight to the beginning of the piece. NEQ’s tempo was stately and appropriate. Beethoven’s penchant for insistent double and even triple stops tested the genre’s limits of monumentality.

The final Allegro afforded Weiss and Kyme a chance to show technical brilliance on several precise trills and scales in parallel thirds.

The following allegro allowed Lisa Weiss, who took over as first violin on the Beethoven work, to show off some precise high notes. Skeen relieved the nauseated voicing of the Adagio with singing moments. The group was most animated on the stuffy dotted figure that pervaded the scherzo, aptly reinforcing it with stiff gestures. The final Allegro afforded Weiss and Kyme a chance to show technical brilliance on several precise trills and scales in parallel thirds. The absurd forte blasts of the movement served as a fitting climax for the evening’s offerings, supplying one big, satisfying final chord.

The Hillside Club’s hall yields good acoustics for chamber music, and NEQ cleverly arranged the stage with a central standing lamp to appear more like the spaces in which domestic music was made. Although the programming was far more demanding than the parlor aesthetic suggested, it remained well within the technical and expressive capabilities of this group. NEQ’s nuanced playing is worth an attentive listen.