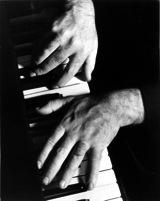 The Wizard of Menlo Park

What makes Henry Cowell such a fun composer to listen to is that you never know what he’ll do next. A whole bunch of the tricks up his sleeve were on display at a mash-up concert of his chamber music on Thursday, the first and more adventurous of two concerts last week sponsored by Other Minds.

Thursday’s (read a corresponding review) was held at the Valley Presbyterian Church in Portola Valley — an appropriate locale, as Cowell was born and lived for many years in the Menlo Park hills, only about five miles away down Sand Hill Road. Charles Amirkhanian, artistic director of Other Minds, introduced the concert by describing Cowell as the experimental modernist who ingratiated his audiences, rather than alienating them.

That’s certainly true. Take Cowell’s most famous contribution to the musical vocabulary, the tone cluster: playing a range of notes on the piano simultaneously with anything from several fingers to the entire forearm laid on the keyboard. Yikes, it sounds terribly noisy. Not necessarily. In a series of short piano pieces, Sarah Cahill showed what Cowell could do with these and other techniques. In The Tides of Manaunaun, tone clusters from the left arm form a gentle wash of sound underneath the right-hand melody. In The Trumpet of Angus Og and Exultation the right arm inverts the process, playing fast, punchy rhythms or even the melodic line in clusters.

Not content with that, Cahill leaned over the piano to pluck the strings like a harp and strum them like an autoharp. Cowell named this piece for the instrument he intended to evoke, Aeolian Harp. In the next piece, Cahill would mute or stop the strings with one hand while playing the keyboard with the other, producing weird thumping sounds. Cowell named this one Sinister Resonance; in Cahill’s gentle handling, it was more tentative and random than sinister, albeit no less appealing for that. (Cowell resurrected this technique some years later in a violin sonata, played on Friday’s follow-up program.) Even Anger Dance, a piece that came to Cowell one day when he felt genuinely angry, was almost light and tripping in Cahill’s hands.

Josephine Gandolfi, who accompanied mezzo-soprano Wendy Hillhouse in a selection of Cowell’s songs for voice and piano, produced a brisker, less-airy version of Aeolian Harp for Cowell’s repurposing of the piece as the accompaniment to his father’s poem How Old Is Song? Hillhouse sang these songs, several of which she herself had transcribed from Cowell’s manuscripts at the Library of Congress, with obvious affection in a clear, powerful voice well-served by the church’s warm acoustics.

Some of the songs, including a setting of Robert Frost’s The Pasture (Cowell composed this during a New Year’s Eve party, and it was premiered on the spot by his wife), are plain and simple, even hymnlike. Others are darker. Tone clusters form an appropriately funereal background for the setting of Edna St. Vincent Millay’s Where She Lies. The most memorable song of the set was a startlingly dark and angry one, incongruously titled Rest, featuring an oscillating vocal line with glissandos.

Cowell’s gentler side was on display again in a long piece titled Toccanta, for the interesting quartet of flute, cello, piano, and wordless soprano — thus the title, a portmanteau of toccata and cantata. In a review quoted in the program book, Virgil Thomson called this work “an attractive and animated idyll [with] a discreet exoticism,” a fair-enough description. The soprano part, which Madison Smith sang with straightforward vigor, is treated as an instrument like any other. Thus, in the third movement, the cello (played by Hannah Addario-Berry), flute (Sarah Holzman), and soprano each have their solo turns over soft tremolos on the piano (Cahill again).

Addario-Berry delivered what was almost a solo — a long, chromatic melody akin to the vocal parts in the songs — in the Adagio movement of Ensemble. She was accompanied only by the soft intermittent whir of the American Indian instrument known as the thunderstick or bullroarer, which Anthony Brown whirled over his head during part of the piece. Cowell describes the sound as “not unlike that of the wings of a quail in flight,” though to a contemporary ear it perhaps more resembles a less-harsh cousin of the distant revving of a motorcycle out on Portola Road that tried to inject itself into Toccanta.

Possibly the most innovative work on the entire program was the Quartet Euphometric, an experiment in intricate cross-rhythms that Cowell considered physically unplayable when he wrote it. The Colorado String Quartet tossed this very brief piece off casually, without the inhuman perfection that I’ve heard in performances of its companion, the Quartet Romantic. Yet that may be as it should be, for Cowell wrote that he wanted these quartets to sound “human ... warm and rich.”

Where the Colorados really shone was in Cowell’s String Quartet No. 4, “United.” He wrote this in 1936 as his contribution to the growing “populist” mood in American music, though no other populist ever sounded quite like this whining modal rhythmic primitivism. Think of Alan Hovhaness on the proverbial acid. Or imagine strongly modal melodies — an exoticism more open and less discreet than in Toccanta — set against drones and a variety of strange rhythmic sounds: col legno tapping of the bow on the strings; tapping of the fingers on the soundbox; an entire movement where the second violinist turns into a percussionist and hits a wooden block with a padded drumstick. The finale is a march that slowly builds up from long intervals of silence into a slightly out-of-control, dissonant careening. This was Henry Cowell at his wittiest and most intelligent, tremendous fun to listen to, and performed with gusto and enjoyment.

The entire Other Minds performance was like that, really. These performers love Cowell’s music and went to considerable trouble to bring it to us. That love showed in the concert they made.