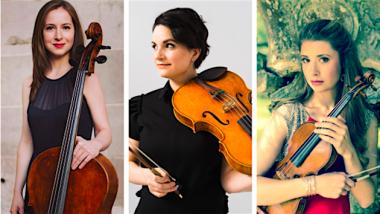 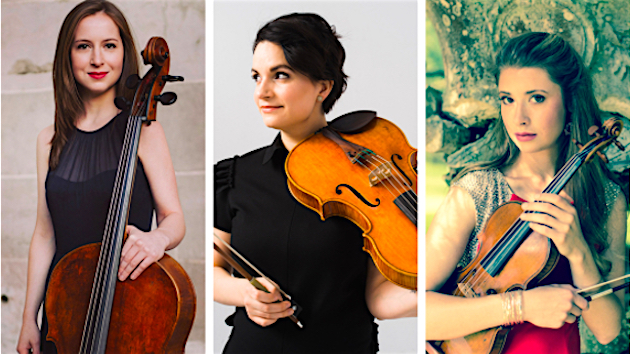 The small Boston Court Pasadena theater was gripped by powerful string playing on Saturday night. The concert, “A Companion Guide to Women Composers and Rome” starred an all-women string trio performing works by women composers as well as Andrew Norman’s The Companion Guide to Rome.

Violinist Madalyn Parnas Möller and cellist Juliette Herlin began the evening with Lera Auerbach’s Three Dances in the Old Style for violin and cello. Möller’s clean harmonics and slides up and down the fingerboard were most memorable in the three-movement work. The piece’s baroque feel, punctuated by sudden stabs of modern technique, drew several bouts of chuckling from the audience. The piece itself was playful, easing the audience into the concert.

Violist Marina Thibeault gave a thunderous account of Anna Pidgorna’s The Child Bringer of Light for solo viola. The piece, based on Carl Jung’s archetype of the Child, afforded Thibeault the opportunity to channel the emotions of her two young children, she told the audience. Often bowing between the viola’s chinrest and bridge, as opposed to the usual zone between bridge and fingerboard, Thibeault showcased the viola’s versatility. The piece was rhapsodic, and Thibeault’s playing spanned a wide emotional range through rapidly changing lines of dissonance. Her playing was rich and warm, even at moments of cacophony.

Rebecca Clarke’s Two pieces for Viola and Cello were at times reminiscent of Shostakovich’s string quartets. Herlin and Thibeault were at their strongest in the piece’s lower registers. The piece’s warm consonances sang nicely in the intimate hall.

Kaija Saariaho’s Sept Papillons for solo cello allowed cellist Juliette Herlin to showcase a wonderful bowing technique. At times, her bow seemed to outline the shape of a butterfly as it followed the natural curve of the cello’s bridge. At one moment, the sound of her fingers tapping on the fingerboard rang out in the hall, before her bow arrived to produce an eerie whisper. She described this work as among her favorite to perform. Her use of harmonics lent a crystalline shine to the work.

I saw Herlin perform this same piece several weeks ago at a concert of the Kaleidoscope Chamber Orchestra. The consistency of her quality is impressive, given the work’s technical challenges.

All roads in this program led to Rome in Andrew Norman’s The Companion Guide to Rome. It was an exciting end to the program, providing each member of the trio opportunities to stand out. The piece comprises nine disparate movements, each based on a different building in Rome. It has received many performances since its composition and is developing a reputation as a crowd-pleaser among the contemporary repertoire.

An air of theatricality suffused the performance when Möhler and Thibeault, at different moments, stood and left the trio to perform a solo movement on the side of the stage. Throughout the nine movements, the ensemble played with a uniform aggression that was both thrilling and controlled. The piece’s final movement filled the hall with long waves of consonant harmonies, as the players dug deep into the strings.

Although spanning composers from different generations, the music on the program formed a cohesive whole. The programming choices made sense, and the pervading emotion was adventure and the varied sounds the strings could make with different bowing techniques. Möhler, Thibeault, and Herlin complimented one another, while also enjoying moments for solo virtuosity. The quality of playing was consistently strong across the ensemble. While modern fare was the subject of Saturday’s performance, I would be thrilled to hear this trio’s take on more standard repertoire.