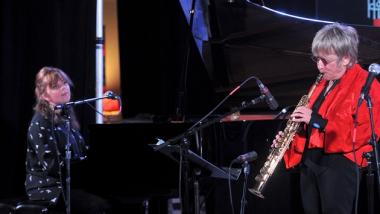 When a music festival’s mojo is working, every set seems to bump up against each other as if part of an expansive conversation about form, expression, collaboration, and the state of the art form itself. It didn’t take long for the synergy to assert itself Friday night on the Monterey County Fairgrounds, where the 61st Annual Monterey Jazz Festival unfolded over the course of three days. In an eagerly awaited and overdue breakthrough, the world’s longest continuously running jazz festival made a concerted effort this year to present women-led ensembles, and the results were both jaw-droppingly revelatory and utterly quotidian.

What’s the Monterey Jazz Fest like when all five major stages feature a significant female presence? Musically, it was much like the past, offering wondrous discoveries and reassuringly inspired encounters, missed connections and filed-away questions. But socially and demographically, Monterey delivered something truly new, and it was glorious to behold. It wasn’t so much the profusion of stellar women players as the fecund diversity in visions of bandleaders, composers, and arrangers.

For every trail blazed on stage, an alternative direction seemed to open up, offering a different perspective on how to get to a similar destination. The festival’s artists-in-residence Tia Fuller (alto sax) and Ingrid Jensen (trumpet) presented a thoughtful and deeply felt tribute to the late pianist Geri Allen on Friday in the Arena that keyed on her enigmatic harmonic vocabulary and cagey sense of time. The following day, San Jose saxophonist Kristen Strom’s Moving Day summoned the sly but open-hearted spirit of the late, beloved bassist John Shifflett, bringing to life his little-heard compositions as a window into the generous soul of a musician’s musician.

In another illuminating juxtaposition, the Pacific Jazz Café, the festival’s most intimate space, featured two literary-inspired projects on Friday. Bassist Lisa Mezzacappa’s hard-boiled avantNOIR played an enthralling set of her music inspired by the crime fiction of Dashiell Hammett’s Continental Op and Paul Auster’s New York Trilogy. While not exactly programmatic, the music could serve as a score for an Anthony Mann yarn, with the beleaguered protagonist running and ducking, glancing around desperately to make sure the coast is clear, eyes searching the dark corners for threats. With Mark Clifford’s percussive vibes and Foley effects and Tim Perkis’s ingenious electronics, the sextet captured the energy and impact of hard-boiled prose, while Aaron Bennett’s rough-and-tumble tenor sax and John Finkbeiner’s telegraphic guitar lines suggested the deeper anxieties and existential quandaries.

From the frantic to the beatific, Jane Ira Bloom’s Wild Lines quartet followed avantNOIR in the Cafe, focusing on the great soprano saxophonist’s music inspired by the poetry of Emily Dickinson. I’ve listened to her albums for decades but never seen her perform. I’m going to do my best not to miss any future opportunities, as she lit up Monterey with her cool brilliance. With pianist Dawn Clement, bassist Mark Helias, and drummer Bobby Previte, the band is inordinately resourceful and mischievously playful. Clement introduced pieces with her self-possessed recitation, and part of the fun was trying to understand the relationship between text, melody, and musical structure.

My ears weren’t fast enough to catch all the connections, but the band, as formidable as any on the fairgrounds, always seemed to be elaborating on Bloom’s unpredictable lines. She possesses an unusually dry tone on a horn that in the wrong hands can quickly wear out its welcome. Waving the saxophone in circles, or sweeping it across her body, bell to the floor, she adds a spatial dimension to her playing as she sends notes zinging out in different directions. Like Mezzacappa’s music, which sent me back to The Thin Man, I got home and pulled out my copy of The Complete Poems of Emily Dickinson with her soprano sax crooning in my ear.

On Saturday, Jane Ira Bloom also joined pianist Fred Hersch, with whom she’s collaborated intermittently for decades, for a duo set that, despite my plans to cut out halfway through to catch a different act, proved impossible to leave. Most of their program consisted of originals dedicated to peers, like Hersch’s winsome sing-song melody for Charlie Haden “Child’s Song.” But it was two closing standards that lifted the beautiful into the sublime. Hersch is one of jazz’s great ballad interpreters, and Bloom matched his time-stopping phrasing on ravishing versions of Sammy Cahn and Jule Styne’s “Time After Time” and Bernstein’s “Somewhere.”

Flutist Jamie Baum’s Septet+ provided another revelation. An exploratory composer and arranger interested in long forms and arresting voicings, she focused on music from her recent album Bridges, which includes pieces inspired by Jewish liturgical chants, music from Nepal, and solos by the late Pakistani Qawwali master Nusrat Fateh Ali Khan that she transcribed and orchestrated. Her wide brass palette, including Chris Komer on French horn, and the wild-card guitarist Brad Shepik, filled each piece with exquisite details, like Komer’s horn and Sam Sadigursky’s bass clarinet melding for a moment of beatific calm in “The Shiva Suite,” commissioned in the wake of Nepal’s devastating 2015 earthquake.

The Monterey Jazz Festival on Tour, an all-star ensemble that will be performing widely next year, made its inaugural run with performances Saturday in the Arena and Sunday, closing the festival in Dizzy’s Den. Featuring musicians in their 20s and 30s, the band almost has too much talent for its own good. The challenge going forward is figuring out how to showcase these very different artists, including vocalist Cecile McLorin Salvant, Canadian trumpeter/vocalist Bria Skonberg, drummer/vocalist Jamison Ross, Chilean tenor saxophonist Melissa Aldana, Japanese bassist Yasushi Nakamura, and pianist and Music Director Christian Sands. Working as an instrumental quintet, the band plays post-bop with easy authority, but each singer takes the group in a very different direction. This is not a bad thing.

For a normal year at Monterey, trumpeter Wadada Leo Smith’s presence might be one of the festival’s major stories. He presented his chamber jazz suite America’s National Parks from his 2016 Cuneiform album of the same name, part of this avant-garde-lion-in-winter’s remarkable outpouring of recordings over the past decade. Featuring the same outstanding cast as the album with pianist Anthony Davis, cellist Ashley Walkers, bassist John Lindberg, and drummer Pheeroan akLaff (with gorgeous projections interpolated with a live video feed of the musicians at work), Smith directed the ensemble through his kaleidoscopic, natural-wonder-evoking score.

The collective trio Thumbscrew with guitarist Mary Halvorson, bassist Michael Formanek, and drummer Tomas Fujiwara delivered one of the festival’s fiercest sets, alternating between originals tunes from a recent release Ours and material by other composers from the companion album Theirs. Formanek’s huge, extroverted bass is the trio’s motor, while Fujiwara’s orchestral drum work fills up the corners without crowding the center. A poker-faced trickster, Halvorson occupies the calm center of the storm, unleashing stinging lines and bending and twisting notes so that a familiar ballad like Jimmy Rowles’s ethereal “The Peacocks” takes on an ominous air.

Those are the quick hits. There were so many other highlights. As much as I loved Tia Fuller and Ingrid Jensen’s Geri Allen tribute “The Fierce Nurturer,” nothing could compete with the set’s trap/tap duet between drummer Terri Lyne Carrington and tap dance maestro Maurice Chestnut. Similarly, pianist Tammy Hall’s talent-laden Peace-tet played an insistently swinging set, but the emotional peak was her duet on “Summertime” with vocalist Kim Nalley, which transformed the over-worked standard into a ferocious, almost operatic protest anthem that still managed to honor the song as a lullaby.

Like the MJF on Tour Band, percussionist John Santos’s Unusual Standards project lives by the more-is-more ethos, with Marco Diaz alternating between trumpet and piano and John Calloway moving from piano to flute to percussion. Adding the powerhouse vocalists Destani Wolf, who put a serious hurt on Bobby Timmons and Jon Hendricks’s “Moanin’,” and Kenny Washington, who soared through a turbo-charged Latin arrangement of the standard “Invitation,” Santos knows how to make the most of the moment.

When it comes to rising to the occasion, the silky jazz/R&B crooner José James offered a preview of his new album Lean On Me (Blue Note), a tribute to the music of Bill Withers that felt like a well-deserved coronation. He’s already a star, but the bespoke fit of the material with the vocalist and his nonpareil band featuring keyboardist James Francies, guitarist Brad Allen Williams, bassist Ben Williams, and drummer Nate Smith added the set to the MJF pantheon.

By the end of the weekend, this edition of the MJF had ascended to one of the most rewarding and fun over the past two decades I’ve been attending, and part of that was due to the ubiquitous presence of women on stage. In a festival preview for SFCV focusing on the unprecedented profusion of female instrumentalists at the festival this year, I used the metaphor (okay, cliché) of the glass ceiling shattering. But on further thought a more apt description of presenters’ longstanding habit of overlooking exceptional women bandleaders is a glass bottleneck.

From jazz’s inception there was no ceiling blocking women from contributing at the highest level (see: Harden, Lil Armstrong; Williams, Mary Lou; Liston, Melba, etc.). But venues and festivals have more often than not treated women players as novelties or carefully rationed commodities, with unwritten rules restricting rosters to a bare handful, if that. Long before #MeToo and #TimesUp called attention to gendered injustice, the pressure for change behind the jazz bottleneck was building. Several activists such as trumpeter Ellen Seeling and Joey Brite have spent years advocating for more inclusion of women players on stage and in classrooms.

If the 61st Annual MJF was an experiment, the results were an unqualified success. But some efforts at replication are in order. The take away for me after all this music was that the curatorial breakthrough offers Monterey a tremendous opportunity. I’ve tended to focus on what the festival can do for women artists by presenting them, but I realized during the course of the weekend that’s backward. At this point in time, while other festivals and presenters are still sleeping on this wealth of talent, the women can set Monterey apart from the competition.

September’s Best Jazz and Beyond Around the Bay

Our top picks for upcoming local gigs featuring jazz and other great music from around the globe.