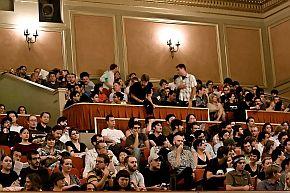 Janos Gereben on August 26, 2008
Musiciens Sans Frontières have arrived, musicians without regard to genre frontiers, courtesy of the Wordless Music Series, which premiered at Herbst Theatre on Thursday. On the one hand, regional pride is raising its ugly head: We don't need no stinkin' "New York new music" to enliven our concert life. This, after all, is the land of the Kronos String Quartet, San Francisco Contemporary Music Players, sfSoundSeries, Other Minds, Composers Inc., Left Coast Chamber Ensemble, and, historically, some of the biggest names among pioneering composers. (Spoken by a transplanted music fan from the early days of the Kitchen and New Music America.)

Wordless Music, the organization says, is:

... devoted to the idea that the sound worlds of classical and contemporary instrumental music — in genres such as indie rock and electronica — share more in common than conventional thinking might suggest. To illustrate the continuity between these worlds, the series pairs rock and electronic musicians in an intimate concert setting with more traditionally understood classical music performers. The goal: to bring audiences together, and to introduce listeners from both worlds to composers that they might otherwise not encounter, for a completely new concert experience. In so doing, Wordless Music seeks to demonstrate that the various boundaries and genre distinctions segregating music today — popular and classical; uptown and downtown; high art and low — are artificial constructions in need of dismantling.

Brave words, lofty goal, but what of implementation? The proof of that pudding was in the listening. And the listening this time, before a full house of 900 (mostly Radiohead fans, judging by T-shirts), was riotously good. Radiohead, not so incidentally, also attracted a crowd of some 60,000 over the weekend to the Outside Lands Festival at Golden Gate Park. How did Wordless come to San Francisco? Through the efforts of Terra Elka Reneu, of Cafe du Nord and the Swedish American Hall, who has been working with Ronen Givony "for quite some time" to make this happen. Her initial interest was created by the series, which, she says, boasts "a glorious (albeit mostly obscure) list of experimental bands that I had personally loved for many years." Others who were instrumental in creating the event are Carla Kihlstedt, Luciano Chessa, Matthias Bossi, John Vanderslice, and Joel Hamilton (producer), among several more. The program at Herbst was fascinating: from the "classic" John Adams (the 1978 Shaker Loops) and Arvo Pärt (Cantus in Memoriam Benjamin Britten, 1977), to the more contemporary — and pleasantly outrageous — Fred Frith's Save As (2005), and Mason Bates' Icarian Rhapsody (2001), to the main attraction for the Radiohead plurality, Jonny Greenwood's 2006 Popcorn Superhet Receiver. Performances and audience approval went from strength to strength. Altogether it was a good program, well-performed (by a brand-new orchestra), and, most importantly, recruiting en masse a new audience to "classical music," whatever that may be.

Some identifications and explanations are necessary at this point. The Series itself, founded and directed by Ronen Givony, pairs rock and electronic musicians with more traditional chamber and new music performers, beginning in New York, and slowly spreading out. Concerts there are now carried by WNYC-FM, hosted by Radio Lab's Jad Abumrad. The San Francisco event had only Givony from the Series, giving a simple, brief introduction about how new ways of listening (MP3s, iPods, and the like) slowly "decompartmentalize" musical genres, mixing classical, pop, rock, and music that doesn't even have a description.

The engine of the Thursday concert was the debut of Minna Choi's Magik*Magik Orchestra, conducted by San Francisco Symphony's Benjamin Shwartz. Choi is yet another bicoastal presence — she was born in Berkeley (and grew up in UC dorms while her father was getting a Ph.D. in engineering), later went to college and worked in New York, and now attends the S.F. Conservatory of Music where she will get her master's in composition. She told Classical Voice:

The idea for the Magik*Magik Orchestra first hit me earlier this year, but the nuts and bolts of actually getting the orchestra together didn't fit until two months ago. After I got the initial players together in June [mostly from the Conservatory], I contacted John Vanderslice, who is the owner of Tiny Telephone Recording Studios (which has been around since 1997) and presented him with the idea of having the Magik*Magik Orchestra serve as a house orchestra for his studio. He immediately loved the idea of having a chill organization of players, arrangers, composers, and producers who all understand classical and indie rock worlds equally whenever he needed backup players for a record. So now, Magik*Magik has a home at Tiny Telephone as their studio orchestra, just in case anyone ever wants us to play with them. We are also playing a show with him in January.

I started Magik*Magik because I saw how difficult it was for producers and concert planners to incorporate classical musicians onto records and shows, between all the musical language barriers, red tape, high prices, age differences, etc., so I wanted to start a group of young players and composers who love indie rock/hip-hop/pop also and enjoy those kinds of collaborations.

Besides Magik's nine first violinists, nine second violinists, six violists, six cellists, four bassists, and two percussionists, the orchestra's debut was also graced by former Kronos cellist Joan Jeanrenaud. Her participation in Shaker Loops (with the theme of heartbreaking simplicity and power resounding in the cello solo) and the wacky Save As commanded the first half of the concert. Shwartz, just back from a grand tour of Europe with the S.F. Symphony Youth Orchestra, had the precision-and-heart-demanding Adams work under effortless control. The performers — in addition to Jeanrenaud — were violinists Gloria Justen, Michelle Maruyama, Daniel Jang, violist Alexa Beattie, cellist Jay Campbell, and bassist Matthew Washburn. Jeanrenaud and percussionist William Winant had fun with Frith's Save As duet, a work written, the composer says, "to exorcise my computer demons by embracing them." Cellist and percussionist alternated in playing music and making noise, the latter "by all means possible," including the throwing of metal objects, tearing paper, and banging on a can. A good time was had by all. The full Magik*Magik came into its own in the second half of the program, beginning with Pärt's meditation on death, which is a stunning piece that begins and ends with silence as part of the score. It requires a kind of "spiritual performance" that listeners might not expect from the virtual youth orchestra of Magik*Magik, yet it was done exceedingly well, more in the right spirit than with proper precision. In the entire orchestra, only concertmaster Gloria Justen is not a student; she occupies the same position with the Chamber Orchestra of Philadelphia, but is a San Francisco resident. Just to show how fluid East-West movements are, 19-year-old first cellist Jay Campbell, who played brilliantly, upped and moved to New York right after the concert, to attend Juilliard.

California Symphony's Young American Composer-in-Residence, Mason Bates, wrote his tribute to Icarus, the mythological character who used his wings to fly too close to the sun. Bates experimented with what he calls a "special quality of string instruments — the ability to play extended passages without a break since no breathing is required" (I could argue with that), and portrayed the fall of Icarus in "a panoply of minimalist fragments." Icarian Rhapsody dates from 1999, and the young composer has "matured" well in the years since, judging especially by this year's Liquid Interface, presented at the Cabrillo Festival, and excerpts from his opera California Fictions, heard at the Aspen Music Festival. And so, to the raison d'etre (for some ... for many) of the evening, Jonathan Richard Guy Greenwood's Popcorn Superhet Receiver. There's a lot more to Greenwood than rock. The 37-year-old Oxford-born guitarist has been composing "all kinds of music" steadily, including grand film scores from the 1994 S.F.W. (no translation in this family publication), to the 2006 Children of Men, and last year's There Will Be Blood. Popcorn comes from Blood, and it's typical of Greenwood's Michael-Nyman-on-steroids style: hypnotic, meandering, but more dangerous-sounding than Nyman has ever been. It's basically a song, but extended here for 20 minutes. (The sense of danger comes through even in his song "High and Dry" for — hate to bring this up, but it's true — I Now Pronounce You Chuck & Larry.) Greenwood's music is eventful: meandering, yes, but also pulsating, undulating, lush, and never boring. But now, to make up for the (perfectly true) Chuck and Larry wisecrack, here are Greenwood's program notes for Popcorn Superhet Receiver, including some impressively honest observations about "the early days" of the composer's following his bliss:

It started off as an obsession with white noise. I knew Penderecki had a solid block of the stuff at the end of his Threnody for the victims of Hiroshima — the strings are playing all possible frequencies, simultaneously, in a two-octave range — and this just fascinated me for years. Apart from anything else, it was a reminder that you could do anything with a string orchestra — all the frequencies are just there, like a block plaster, and [you] can scoop shapes out of the stuff. But there were some blind alleys too. Having the luxury of workshops with the BBC Concert Orchestra, we tried other ideas. One was to build a drum machine out of the white noise. I figured it would be simple: a high cluster of tone for the high-hat, a fuller cluster for the snare, and you'd have yourself a Roland 808 drum machine made from what is basically 32 wooden boxes strung with wires. And everyone'd be amazed. The first few seconds of one run-through was enough to know that this wasn't going to worry Krafwerk much. Instead, it was just the same, unwelcomedly-atonal chord repeated over and over, for minutes on end, to the quiet distress of everyone in the room. You're better off not having been there. This was, of course, because it's not perfect white noise that's being generated: it's not a white-noise module connected to an envelope generator connected to a loudspeaker, but a room full of breathing, shuffling, occasionally distracted players. And some players (and so some frequencies) are inevitably going to be louder than others, or poke out when bows change direction, or because you're sitting closer to some players than others. It's not science. So in this roundabout way, I finally realized that this was the point. I want to be reminded throughout the music that there are 32 people sitting here playing, rather than "sections" of players. And, to enjoy the fact that, because every player is different, then every play-through is going to be different. And in these imperfections, there's other music. It reminded me of when you think there's a radio playing quietly somewhere, and you stop whatever noisy work you're doing — the vacuum cleaner, the car engine — to listen out for it, but by then, it's disappeared too.

How refreshing: an artist airing out the critic within.