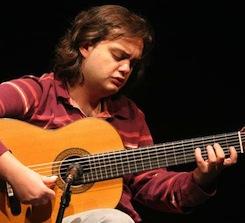 The guitar’s central role in Brazilian culture has resulted in a rich, vibrant repertoire. From the groundbreaking modernist experiments of Heitor Villa Lobos and the bossa nova of Antonio Carlos Jobim, to the samba of Baden Powell and the wide-ranging interests of Odair and Sergio Assad, brilliant players abound in this fertile musical environment. Yamandu Costa, the youngest in this stellar lineage, is a spectacular guitarist and composer who makes music with soulful passion, playful grace, and and stunning virtuosity. At first sight, he lacks the polished stage presence common to most musicians. His clothes do not seem to be expensive or particularly fashionable, and he just ambles on stage. But on Sunday, before he even began to play, his natural, unaffected manner and his palpable joy in the occasion won over an audience of classical guitar enthusiasts and lovers of Brazilian culture, including the Brazilian ambassador to the U.S.

Sunday’s recital at Marines’ Memorial Theatre in downtown San Francisco, which mostly featured Costa’s own compositions, began with an intense and passionate solo, a slow, soulful portrait of a melancholy mood painted with all the color the nylon-string guitar has at its command. This then segued into El Negro del Blanco, a fast choro- influenced piece with an infectious groove, a catchy melody, and lively chordal syncopations — a work expressive of an unbridled joy in life.

For Costa, the guitar is a natural extension of his body and soul. He has none of the physical stiffness common to guitarists and always plays with serene confidence. He unaffectedly changes position as the music demands, at times practically dancing in his seat, and his face always reflects the music’s changing moods. While the recital was definitely focused on his wonderfully expressive guitar playing, the emotion overflowed and Costa enhanced the evening in a natural manner with some whistling, scat singing, foot stomping, and even a song with lyrics.

The evening included two new compositions, Cancion de cuna, a lullaby written for his young son. Costa writes music influenced by the Brazilian popular tradition but speaks movingly of his love for classical guitar. He says he hopes his son “will play Bach and will also play Django [Reinhardt]. This is my dream, because everything is beautiful.” The other new work, Mangore, was an homage to the great Paraguayan classical guitarist and composer Augustin Barrios. Additional highlights included a virtuosic Homenageando Baden Powell and an over-the-top Choro loco (Insane choro) that takes to extremes all the conventions of groove, syncopation, counterpoint, and modulation.

Costa is a spectacular guitarist and composer who makes music with soulful passion, playful grace, and and stunning virtuosity.

Costa played a guitar recently built by Will Hamm, a luthier from Alberta, Canada, who was present for the recital and thanked from the stage. Costa told the audience how much he loved his new instrument and then mimed eating the guitar. Yamandu Costa is extremely popular in Latin America, Europe, and Australia but is not yet widely known in the U.S. Thanks should be offered to the Omni Foundation’s Richard Patterson, who labored for several years to put together a U.S. tour, including stops in New York, Baltimore, Miami, Houston, and San Francisco, that would enable Costa to play for North American audiences.