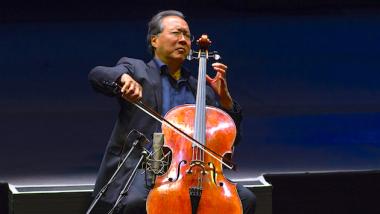 In a welcome pause after a dreadful week of national fracture, strategic distraction, and traumatic amnesia, Yo-Yo Ma brought his exceptional gift of integrity, focus, and memory in a marathon performance of the six Bach suites for solo cello. At the University of California’s Hearst Greek Theatre, before a sold-out audience of thousands, the 63-year-old Ma played for two-and-a-half hours straight, breaking only to acknowledge the crowd’s enthusiasm between suites with a rapturous smile and arms outstretched, seemingly half in pride and half in gratitude.

Bach’s six suites are at the core of the repertoire for solo cello, particularly since their rediscovery in the mid-20th century, championed and recorded by the Catalonian cellist Pablo Casals. They are, like many other Baroque suites, based on the conventional dance forms of the day — Allemande, Courante, Sarabande, Minuet, Bourrée, Gavotte, and Gigue — but Bach’s are unusual in their difficulty and inventiveness, pushing the solo instrument to its limits in order to intensify and deepen the harmonies and rhythms of the dances. 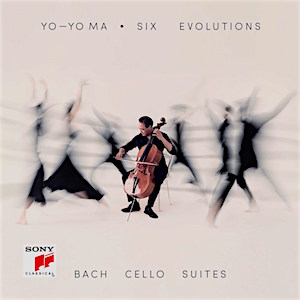 Ma learned the suites by memory in his youth, and long ago worked out the complicated fingerings and hand positions necessary for Bach’s demanding combination of melody, harmony, rhythm, and counterpoint — all delivered by a solo instrument with only four strings. Ma has performed the Bach suites for almost half a century now, and recently released his third recording of them, titled Six Evolutions. Over the next two years, he will be performing the suites in concerts around the world; this concert was presented by Cal Performances.

Listening to him play them now, I sensed how deeply he inhabits them. Going far beyond the notes themselves, Ma has internalized the structures of each dance, of each suite, and of the whole sequence of the six suites. Pausing for only the briefest of beats between movements, his bow hung poised for the next dance, as if it were inevitable that this Gavotte, say, must follow that Courante.

I remember once hearing Ian McKellen reading Shakespeare, and feeling that neither Shakespeare nor McKellen really existed in that moment, but that the words were coming from some deeper, historical space beyond personality. So it seemed at times with Ma’s rendering of Bach’s music.

In Ma’s hands, each suite took on a sense of wholeness, not merely a collection of movements but an emotional journey in itself. The D-minor suite, for example, seemed to move through realms of tragic instability, with complicated, multiple voices now anxiously crying out, now grandly heroic. The third suite, by contrast, seemed to live in an oceanic world, launched by gently rocking waves in the Prelude and reinforced in the second Bourrée by a gorgeous fluidity — the product of Ma’s heart-rendingly smooth legato bowing.

One could also follow the trajectory of an individual dance form through the sequence of iterations in the six suites — the Allemandes with their varieties of stateliness, complex Courantes that negotiated their inherent rhythmic instability, exciting Gigues that fired bolts of lightning with their sixteenth notes, and above all the slow, profound sorrows of the Sarabandes.

Like anyone playing to the vast spaces of the Greek Theatre, Ma’s cello was powerfully amplified. Usually, I prefer Baroque music delivered acoustically, not electronically, but here the amplification was both necessary and significant. Every nuance of the playing was vitally present, even the rhythmic thumps as Ma’s powerful left hand pulsed onto the cello’s fingerboard.

The final two suites are especially technically demanding. Ma played the two of them as a single unit by restraining applause after an introspective ending to the fifth suite — his bow held motionless for what seemed an eternity — before launching on the stunning trumpet calls of the sixth suite. That suite may have been written for a now-rare instrument with a fifth top string, so performing it on today’s four-string instrument presents extra difficulties. If anyone in the audience felt (justly) a little exhausted by that point, the fireworks of lightning-fast passagework in the highest regions of the fingerboard amply resupplied the adrenalin.

It was clear throughout the evening that this was not just a performance but a gift from the heart. In acknowledging the ovation at the end of the concert, Ma spoke passionately about his conviction that music can “help us make things work for all of us.” From the audience’s equally passionate applause, I am guessing that few left the Greek Theatre without at least a glimmer of that hope.

The Cello Concerto was one of three Salonen concertos on display in L.A. this weekend.

Yo-Yo Ma: Citizen of All Humanity