When cellist Jonah Kim and pianist Sean Kennard met at Philadelphia’s Curtis Institute of Music, they were both still in their teens. Their youth wasn’t about to hold them back. The first piece they undertook together was Rachmaninoff’s technically and musically daunting Sonata for Piano and Cello, Op. 19. The fruits of the team’s early labor are on full display in a new Delos recording that pairs that potent masterwork with Samuel Barber’s Sonata for Cello and Piano, Op. 6, written when the composer, who was also a Curtis student, was in his early 20s. 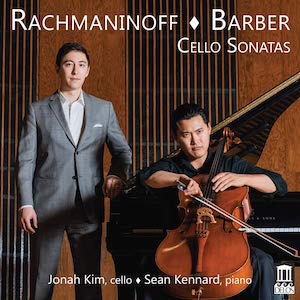 From the pensive opening measures of the Rachmaninoff, Kim and Kennard are in gripping command of the work’s expansive material. The two tightly synced players embark on a dynamic conversation as the broad-beamed first movement opens out. A brooding mood takes over, giving way to ecstatic exclamations and lyrical surges. The cellist’s work stands out, especially in the lower register, where a rich, tawny tone becomes a deep-set anchor. A flashy climax brings the movement to a close.

A fleet Allegro, full of light but decisively landed staccatos, is like a wild coach ride across the Russian steppes. Kennard, who is kept busy throughout with the chattering piano line, supports the cello’s flights of voluptuous fancy and bustling passagework. The Andante that follows provides a welcome change of pace, with Rachmaninoff’s instinct for wistful meandering melodies and musing harmonies the main attraction. Kennard executes a particularly vivid swoon at one point.

The sonata comes to a close in an eventful and combustive Allegro. The piano, which does a lot of busy support work throughout, takes center stage early on, and Kennard, at once fluid and distinctly voiced, makes the most of it. There’s an orchestral scale to this movement, the longest of the four. With his sprawling melodies, evolving temperaments and even some melodramatic self-indulgence, Rachmaninoff holds nothing back.

The performance is exciting to the point of unruliness here and there, with the balance out of whack and some blurry passages. But the pair rally for a vital finish. They bring a restless protean energy to this immersive and deeply engaging work over all.

The Barber sonata brims over with a seriousness of purpose. In three densely packed movements, the composer unleashes a veritable fury of feelings and effects. The piece opens with sweeping cello phrases over angular, thorny piano lines. The instruments seem to be a in mortal combat before suddenly reaching an accord. A lustrous melody arrives, leading to some sweet exchanges before things go awry again. Fittingly, Kim employs a more astringent, sinewy tone here than he does across the more overtly romantic contours of the Rachmaninoff. Kennard counters with sharp attacks and a percussive urgency of his own.

All that pressure is released in a delightful Adagio movement. Kim lavishes a beautifully controlled tremolo here until a skittering mid-movement Scherzo breaks in. This lovely movement ends with a tender lyrical decrescendo. A slashing, almost violent short movement, aptly marked Allegro appassionato, brings the piece to a close.

Kim and Kennard give this cello sonata program fully committed, colorfully contrasted readings. While the Rachmaninoff is a more fully satisfying work, there’s something about the sense of danger and fearlessness they bring to the Barber that captures their own youthful musical zest. Like the composer himself, they go for broke and hold nothing in reserve.

The cello-piano pair are equal partners in a concert slate that showcases the strengths of each artist.