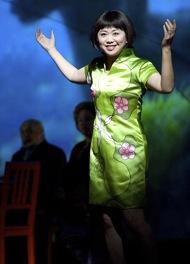 Mezzo-soprano Zheng Cao, whose saga with stage four lung cancer continues to inspire an international audience, is in the midst of an astounding series of performances with Philharmonia Baroque Orchestra, conducted by Music Director Nicholas McGegan. Astounding, not simply because as a substitute for the great mezzo Frederica von Stade (Flicka), she mirrors her great predecessor’s ability to give so fully of her heart and soul, but also because she is singing so beautifully, so knowingly, and so completely.

Heard in Berkeley’s First Congregational Church on Saturday, with performances still to come in Berkeley, Atherton, and Walnut Creek, Cao was in fine form. High notes sang out freely, and the middle of the voice exhibited a radiance — even a glamour — that bespoke vocal health. Initially dressed in a simple black outfit, adorned with a butterfly-shaped orange shawl that affirmed that there is plenty of life flowing through this wonderful singer, she looked as adorable as she was gracious. And the sincerity of her post-performance expressions — that ineffable mixture of joy, tears, devotion, and gratitude that has made her one of our finest Suzukis in Madama Butterfly ever to grace the stage of the War Memorial Opera House — touched every open heart in the room.

Deep Resonances With Her Predecessors

Cao’s two opening arias conveyed resonances that extended far beyond the performance itself. The first aria, “Scherza infida” from Handel’s Ariodante, remains indelibly associated with the late Lorraine Hunt Lieberson. Many in the audience were aware that the great mezzo recorded the complete opera with McGegan and Freiburger Barockorchester in 1995, 11 years before she died of cancer. Cao even used the same ornaments that Hunt Lieberson sang with McGegan at the Göttingen Handel Festival almost 16 years ago.

Cao’s choice of “Scherza infida” was undoubtedly influenced by the opening phrase of its recitative, “E vivo ancora?” (Do I still live?), which she proclaimed with glorious tone. If she had paused to look closely, she would have seen the answer reflected in the eyes of her grateful audience.

The second aria, “Che faro senza Euridice” from Gluck’s Orfeo ed Euridice, was the calling card of English contralto Kathleen Ferrier. While suffering from breast cancer that had metastasized to her bones, Ferrier bravely undertook a final run of Orfeo at Covent Garden in February 1953. She cut short her appearances after her left thighbone partially disintegrated during the second performance. With music lovers worldwide holding her in their hearts, the bearer of one of the most spiritually profound instruments ever to grace the operatic and concert stage died eight months later, at age 41. Thankfully, Ferrier’s ability to convey spiritual truth through music has lived on through her rightful mezzo successors, Lorraine Hunt Lieberson, Janet Baker, Frederica von Stade, and Zheng Cao.

Flicka had originally planned to perform several extracts from Gluck’s Orfeo. That Cao sang only the aria most associated with Ferrier, bookended by PBO’s wonderful performances of the opera’s Dance of the Blessed Spirits and Ballet – Chaconne, lent extra poignancy to her contribution. As if Cao’s emotionally charged rendition, with her heart as open as a heart can be short of bursting, were not enough in and of itself.

Into the Bright Lights

The evening’s raison d’être was the U.S. premiere of PBO choral alumnus Nathaniel Stookey’s Into the Bright Lights (2009), a setting of three autobiographical poems by von Stade. Although no one is better suited to sing these settings than the author herself, Cao again brought an extra, unintended resonance to the text.

The first song, “S’io,” is von Stade’s reflection on her inevitable departure from the operatic stage. “Oh please let me go on until I’m ninety,” she writes, fantasizing the ludicrous prospect of a little white-haired lady, a walker by her side, singing Cherubino one more time.

With Cao standing solidly in Flicka’s place, adorned in a dress as red and youthfully bright as the wrap that the unforgettable Bette Davis wore on her final miraculous, post-stroke appearance on The Tonight Show, the song’s opening line, “The time has come, I tell myself,” could be taken multiple ways. Even more poignant was the section, “If I still have a breath left in my lungs … then I’ll go on singing and singing!” Which is exactly what Cao is doing. Tell it like it is, girl.

The other songs reflect on aging and the perils of performing. Cao was marvelous in both. As for Stookey’s music, I know of no finer compliment than to report that every note supported the meaning of the text. In the wrong hands, Flicka’s poems could have taken on a note of unintended, maudlin self-pity. Nothing of the sort here, with music as fresh, lovely, and emotionally open as the great von Stade herself.

Now celebrating its 30th season, 25 seasons of which have been conducted and directed by Nicholas McGegan, the members of Philharmonia Baroque opened with Rebel’s Les Caractères de la danse (with the missing second violin and viola parts and added wind instruments composed by McGegan) and closed with Rameau’s orchestral suite from Les Indes galantes. Both were played with the touch of springtime. In the Rameau, the use of a wind machine, tambourine, and a host of surprising instrumental textures were a constant delight — as delightful as McGegan’s ever-buoyant conducting style.

Especially touching were the wind duo of Stephen Schultz and Mindy Rosenfeld. Schultz played the flute solo in Dance of the Blessed Spirits, and Rosenfeld played piccolo to Schulz's flute in the Rameau suite. Rosenfeld's appreciation during Schultz's masterful solos was palpable, and added to the deliciousness of the experience.

Just as touching was the genuine joy with which orchestra members acknowledged Cao’s outstretched arms and air kisses. If you ever wondered why PBO’s performances never sound routine, it is because their esprit du corps is allied with a true love of music. Few orchestras are capable of producing such a life-affirming evening.

Kathleen Ferrier left at least four recordings of "Che faro senza Euridice." One is in English. The first we've included, in 320 kbps mp3 format, is from a 1951 live performance at Netherlands Opera, conducted by Charles Brock. The second equally remarkable version, accompanied by an unidentified pianist, was recorded in Montreal in 1950.