Set to tour Cuba next month, the S.F. Girls Chorus is in top form, with commissioned pieces, sacred songs, and fun works too.

This strong early-instrument ensemble not only excels in Mozart and Haydn, but also performs an entertaining quartet by the latter’s contemporary (and a near-unknown) John Wikmanson.

Lovely, From Dawn to Dusk
BY Anna Carol Dudley

The Sanford Dole Ensemble previews Easter Week with solemn settings of Creation texts and Jesus’ last words from the cross.

Philharmonia Baroque Lights Up All Creation
BY Anna Carol Dudley

The always-enlightened Philharmonia Baroque Orchestra, with three superb soloists and a fine Chorus, brings out the marvels of Haydn’s Creation.

Sure Singing by Chora Nova
BY Anna Carol Dudley

Motets and songs of longing or loss made up Chora Nova’s fine Saturday program of moving works by Felix Mendelssohn and Josef Rheinberger, under Paul Flight’s direction.

Words and music came together (or didn’t) Sunday in five works sung by Volti and the Piedmont East Bay Children’s Choir — Robert Geary’s gift to creators and performers of new choral music.

Magnificat’s Christmas concert, a celebration of a midnight Mass by Marc-Antoine Charpentier, sung by a solo quintet and accompanied by an all-star early-music band of seven players combined for an excellent ensemble.

Advent has begun; Christmas is coming. And choruses are singing the Messiah. Philharmonia Baroque Orchestra’s performance was a triumph and the chorus and orchestra sang and played as one instrument.

The Triumph of Monteverdi’s Madrigals
BY Anna Carol Dudley

And the winner is ... Claudio Monteverdi! He was well-served Saturday night in a Berkeley Festival performance at that city’s First Congregational Church. ARTEK (from The Art of the Early Keyboard), a New York–based ensemble of six singers and seven players of plucked and bowed strings, gave magnificent voice to Monteverdi’s Fifth Book of Madrigals.

Bach’s great Passion According to Saint John was given eloquent voice by the California Bach Society Sunday afternoon at the First Congregational Church of Berkeley. The Passion — the story of the end of Jesus’ life — is operatic, in the sense of combining narrative and commentary.

Claudio Monteverdi, already famous as a composer of secular music in the late 16th century, published a Mass and a vesper service in 1610. On Sunday afternoon, in Grace Cathedral, Magnificat celebrated the 400th anniversary of that event.

Ian Bostridge is a master singer of German lieder, and he brought Schubert’s Winterreise to UC Berkeley’s Zellerbach Hall Sunday afternoon, splendidly partnered by pianist Julius Drake. Experiencing Schubert’s intimate, searing song cycle would be more satisfying in the intimacy of Hertz Hall, where we last heard Bostridge. But, being smaller, Hertz holds fewer people, so what is Cal Performances to do?

Cads Get Their Comeuppance
BY Anna Carol Dudley

Berkeley Opera, undergoing some significant changes, is assuring its audience that all is well, by presenting an engaging production of Mozart’s Don Giovanni. Saturday’s performance in its new venue, the El Cerrito Performing Arts Theater, under the direction of new Artistic Director Mark Streshinsky, was a resounding success.

Magnificat’s dazzling singers have done it again. As part of their ongoing project to perform and record the complete works of Chiara Margarita Cozzolani, four singers brought her glorious music vividly to life in a performance Saturday at St. Mark’s Episcopal Church in Berkeley. The four women sang music that Cozzolani wrote for the famous singing nuns in her convent, Santa Radegonda, in 17th-century Milan.

Soprano Nuccia Focile, singing Verdi and Puccini in her native tongue for an adoring crowd Sunday afternoon in Berkeley’s Hertz Hall, shared the performance with tenor David Lomelí. Focile has sung in most of the world’s famous opera houses, and Lomelí, a recent Adler Fellow in San Francisco, is at the beginning of what promises to be a brilliant opera career. Together, they brought scenes from La bohème and La traviata vividly to life.

Schubert, and Nothing But
BY Anna Carol Dudley

Michael Schade makes a strong case for singing nothing but Franz Schubert, as he did Sunday afternoon in Berkeley’s Hertz Hall, presented by Cal Performances. The German-born Canadian tenor combines his fluency in Schubert’s language with Mozart’s Italian sensibilities. His singing flows effortlessly from ringing, heroic declamation to exceedingly soft, intimate passages.

The Grace Cathedral Choir is going to Italy, where the singers will experience performing Italian Renaissance and early Baroque music in its original physical and cultural context. On Sunday, the choir — 18 boys on the treble parts and a dozen men singing tenor and bass — offered a dress rehearsal for a large, enthusiastic audience, gathered to wish them a buon viaggio.

San Francisco Symphony
Gilbert & Sullivan
BY Anna Carol Dudley
When Michael Tilson Thomas programmed the San Francisco Symphony's semistaged production of Gilbert and Sullivan's Iolanthe for June 18-21, little did he know how au courant it would be. As rehearsals begin on this great 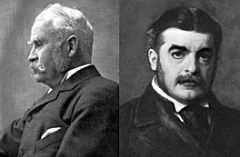 send-up of the English Parliament, the news from England is full of Parliamentary scandal and speculation on the fate of the government, while our government is working on "a new and original plan," like G&S's Lord Chancellor's, to govern honestly.

The U.S., in the throes of controversy over a Supreme Court appointment, may well come to long for the good old days of former Chief Justice William Rehnquist who, inspired by Iolanthe, added four golden stripes to his sleeves and quoted the Lord Chancellor in one of his opinions: "The Law is the true embodiment/Of everything that's excellent./It has no kind of fault or flaw/And I, My Lords, embody the Law."

Iolanthe is a fairy, who once married a mortal and had a son, was therefore banished from Fairydom but has now been pardoned. Her son, the shepherd Strephon, loves Phyllis, who is the ward of the Lord Chancellor and is beloved by him and the entire House of Lords. Strephon appeals to Iolanthe and the Fairy Queen to help him win Phyllis. As anyone can see, the plot will proceed to be exceedingly complicated. Somehow, by the end, Strephon and Phyllis will be united, and the peers of the realm, faced with opening the peerage to competitive examination, will abandon Parliament and fly off with the fairies.

Gilbert outdid himself on the libretto, and Sullivan wrote a masterful score, with echoes of Mendelssohn and Wagner. MTT was originally scheduled to conduct, but George Manahan, the musical director of New York City Opera, will take over for him. This production does not propose to undertake the kind of manic staging offered by our Lamplighters, but the Lamplighters were big enough to recommend, in their publicity earlier this year, that people take in both their performance and the Symphony's.

Sanford Dole Ensemble
To Heaven, By Way of Earth
BY Anna Carol Dudley

The Sanford Dole Ensemble performed a program called "Heaven and Earth" Saturday night at the San Francisco Conservatory of Music. They were a month late for the celebration of Earth Day, but exactly on time for the anniversary of the premiere (on May 30, 1992) of Libby Larsen's Missa Gaia: Mass for the Earth. An additional touch of serendipity for me was that I attended that debut. It was good to hear the work again.