Mozart and a Master
BY Jerry Kuderna

It seemed fitting that the conclusion of the 35th season of the Berkeley-based Midsummer Mozart Festival, coinciding with the number of years of Wolfgang Amadeus Mozart’s life, would include an early symphony from his youth in Salzburg and conclude with his last, the glorious, seemingly unsurpassable “Jupiter.” 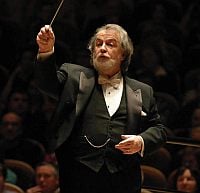 Konstantin Lifschitz
On the Path to Perfection
BY Jerry Kuderna

It has become a cliche to refer to classical musicians as being “phenomenal” or even geniuses at their instruments. If a performer can get to the heart of the music, that’s enough for me. Still, in a profession in which it’s expected that as a teenager you have already learned and performed the summits of the keyboard, it has become increasingly difficult to grab the attention of the public as, say, Vladimir Horowitz did when he raced Sir Thomas to the finish line of the Tchaikovsky First.

Krystian Zimerman
Playing B's From the A-List
BY Jerry Kuderna

After two staggering performances of Bach and Beethoven at Krystian Zimerman’s recital Friday, sponsored by Cal Performances at Zellerbach Hall, the familiar thought came to mind: “How can you follow that?”

Sounds of Conviction
BY Jerry Kuderna

Formerly known as “A Bright New Trio,” pianist Joseph Kalichstein, violinist Jaime Laredo, and cellist Sharon Robinson have been together now for over three decades — and it shows, not only in their technical mastery as individual instrumentalists, but also in the subtle ways that great chamber ensembles mature. They match each other nuance for nuance, and they can complete each other’s sentences without your even being aware of it.

Schiff at the Summit
BY Jerry Kuderna
Hans von Bülow once described Bach’s Well-Tempered Clavier and Beethoven’s 32 Piano Sonatas as the Old and New Testaments of music. All pianists undertake serious study of them, but András Schiff has made a specialty of performing both in toto, giving him a unique distinction among the modern-day prophets of the piano and reason for Beethoven bibliophiles to attend his upcoming two concerts. He has even given us encores of complete Bach Suites at the close of his “all-Beethoven” programs, thus underlining the close lineage between the two composers. 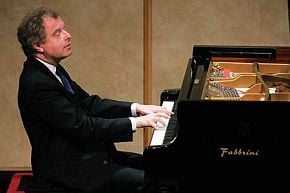 Since three of the last six Sonatas contain fugues at their climactic points, as well as a host of fuguelike sections, Schiff seems to be just the man for the job. To top it off, he will be playing all six within a week’s time. His March 29 recital will feature Sonatas 27–29, including the Hammerklavier, and on April 5 he will play the last three, 30–32, long regarded as the holy trinity of the set. Both will be presented by San Francisco Performances at Davies Symphony Hall.

How to order this huge body of work in performance? Artur Schnabel, who was the first to play (and record) the entire cycle, did it initially in the early 1930s, and three times thereafter. Schnabel chose to intermix Beethoven’s early works with later enigmatic ones, presenting a conundrum in juxtaposition. In contrast, by playing the Sonatas in chronological order, Schiff continues to highlight the way in which Beethoven steadily develops and expand the emotional range of the classical form, even as he makes decisive breaks, as in the three Sonatas Op. 31, which the composer said “turn over a new leaf.” If Schnabel’s approach was like a mountain climber scaling the loftiest peaks on different expeditions, Schiff has saved the highest summit for his next climb.

Beethoven composed no fewer than 23 of his Piano Sonatas during the first decade of his career, 1795 to 1805. Perhaps the greatest of these is the Sonata Appassionata, a tragic work that nonetheless shows the composer at his most powerful and defiant. After the great difficulties he had with his opera Fidelio, it must have seemed that his days of glory as Vienna’s greatest composer were over. Liszt, Chopin, and Schumann were coming up, and then there was Franz Schubert, who simply worshiped him. He needed a comeback, and it came in 1818. Called Sonata Op. 106 in B-flat Major, Fuer das Hammerklavier, and the product of years of labor, he said it would keep pianists busy for the next 50 years. It has taken more than that for performers and audiences to come to grips with Beethoven’s colossal ability to organize large-scale forms and realize the fathomless emotional worlds they contain.

Of the last three Sonatas, composed in 1822, around the time of the Ninth Symphony, Beethoven said they came out in a single breath. If this is true, then Schiff is right to play them all together, perhaps with some breath in between. They are among the supreme treasures that Beethoven gave to pianists and to the world of music — so expect a revelation.

Truths Out of Time
BY Jerry Kuderna

The pianist Rudolf Serkin took a year off from concertizing to study the Bach Cantatas because, as he said, “They are such beautiful music.” On hearing the American Bach Soloists perform four of them Saturday at the First Congregational Church in Berkeley, and after witnessing the vitality, spirit, and timeless human truths that they contain, I realized it would take a lifetime to fully get to know the wonders of this music.

Consolation and Joy
BY Jerry Kuderna

While speaking with one of the singers of the Pacific Collegium during the intermission of their Sunday concert giving the complete motets of Johann Sebastian Bach, I mentioned that I came to love these works only via recordings, while attending the Carter centenary at Tanglewood this past summer. I remarked how moved I was finally to hear them performed live, and how much more effective they are done in such a superb acoustic space as St. Paul’s Episcopal Church in Oakland (rather than through a car stereo).

In the Sound Fields of Elliott Carter
BY Jerry Kuderna

Composer Elliott Carter has been around for 100 years, literally. For 60 of them he has been at the forefront of serious American composition. But, like so many 20th-century composers, his music has had more limited exposure to audiences than his genius warrants. But that may be changing now. Next weekend, San Francisco Performances will divide two concerts devoted to his work between two generations of "young artists." The Pacifica Quartet will play his five string quartets on Saturday, Dec. 6. The next day, Dec. 7, Ursula Oppens will perform Carter's complete works for solo piano.

András Schiff continued his traversal of the 32 Beethoven sonatas Sunday with a program that included two of the high points of the composer's middle period. At one end was the Sonata Op. 57, the "Appassionata" (1805), the work that surely marks the peak of the "heroic" Beethoven's piano output. At the other end was the less heroic and more vulnerable work, Sonata Op. 81a ("Les Adieux"), dating from 1810.

Call it the Wall Street Willies or what you will, the audience attending Richard Goode's Cal Performances recital at Zellerbach Hall on Sunday afternoon was in need of a musical bailout. Despite the somber tone of Bach's G-minor prelude from Bk. 2 of the Well-Tempered Clavier, which began his program, there was a palpable feeling of relief — that "this too shall pass."

Billed as "Classics to Moderns" 1910-2008, the duo of Sarn Oliver and Robert Pollock presented a program of solid, if seldom played, masterpieces Sunday at the Berkeley Hillside Club as part of its concert series, in association with Ebb & Flow Arts.

Robert Schumann holds a special place in the repertoire of a young and talented pair of musicians, pianist Hillary Nordwell and violinist Monika Gruber, who call themselves the Eusebius Duo. Therein lies a tale: Schumann gave names to the two polar sides of his personality and used them when moonlighting as a critic or even when signing movements in his compositions, "Eusebius" being the introverted, and even depressive, side.

Symphony aficionados seldom get a chance to hear two performances of the Brahms Second Piano Concerto so close to each other. Last month it was performed in Oakland. And now, to celebrate the 175th anniversary of Brahms' birth, the San Francisco Symphony and Michael Tilson Thomas decided to do things right and put on a festival that offered both piano concertos along with two other major works, including the Fourth Symphony and the Requiem. Together with various chamber works prefacing some of the concerts, it promises to be a rich feast indeed.

To play all 32 Beethoven sonatas in public over two years, or 20, is one of the greatest challenges facing the pianist. The technical difficulties they present pale before the range of experience they embody and demand for their full realization.

I came in hopes of a full solo recital from Leon Fleisher at Herbst Theatre on Saturday. I left grateful that Fleisher is back and in fine form as a soloist, and that he shared the stage with his wife, the pianist Katherine Jacobson Fleisher. The program included two late masterpieces by Schubert: one for piano duet, one solo. It was a combination that brought to life the rich outpouring of music that was Schubert’s crowning achievement and demonstrated that, two-handed or four-handed, it is the heart that counts.

Yundi Li presented a recital of tried and true audience favorites at Herbst Theatre on Sunday, under the auspices of San Francisco Performances. Some of them he has played here before. I went to the theater hoping to gain some insight into the artistic imagination of this acclaimed young artist. I left dazzled, puzzled, and wishing for more substance along with the pyrotechnics that these days seem to be the measure of all things pianistic.

Time was when piano recitals would end with a rousing performance of a Hungarian rhapsody, an etude, or the Mephisto Waltz by Franz Liszt as a surefire way to bring the audience to its feet. Christopher Taylor, who last year in Berkeley played all three books of etudes by another Hungarian, Györgi Ligeti, once again put himself to the test, this time in the Napa Valley Opera House last Thursday, playing all 12 of Liszt’s Transcendental Studies at the Festival del Sole.

A Master of Intimate Works
BY Jerry Kuderna

In the 40 or so years that I've been attending Richard Goode's concerts, none has failed to challenge me to hear music with fresh ears. His solo recital Monday night at Davies Symphony Hall, presented by San Francisco Performances, was no exception. In an unusual program featuring shorter works from Mozart to Debussy, Goode revealed that the intimate can be as provocative and compelling as the lengthy sonatas that form the basis of his repertoire.