San Francisco Performances
Scaling the Heights of Pianistic Virtuosity
BY Ken Iisaka
Ever since I heard Marc-André Hamelin perform Shostakovich’s Piano Concerto No. 1 in Ottawa some 20 years ago, I have always found his highly deft technique and clean, transparent interpretation to be an inspiration. I have heard him perform live in Montreal, London, and Tokyo, among other cities, and have listened intently to a number of his recordings. 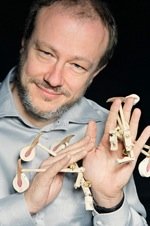 With his startlingly immense technical capabilities, he is famous for performing the most difficult piano repertoire. Perhaps not unlike Argerich or Pletnev, he too could have easily established speed records on a number of well-known works in the finger-busting repertoire. However, as trendy as the concept may be these days, Hamelin’s extraordinary technique actually took him to places far more worthwhile.

Hamelin (See interview) has instead exploited his immense capabilities to explore the repertoire rarely visited by other pianists. He seemingly brushes aside such challenges as unfamiliar style and technical difficulties, and he has championed composers whom time has forgotten, such as Alkan, Godowski, Medtner, and Sorabji. Perhaps they are not yet mainstream household names, but neither was Bach’s “Goldberg Variations” before the landmark recording by another Canadian, Glenn Gould, in 1955.

Yet Hamelin is not an artist who has stubbornly stayed out of the paths well-traveled. He is also recognized indisputably as an leading interpreter of such composers as Haydn, Liszt, and Scriabin. The program he will present on Dec. 15 at Herbst Theatre is a reflection of Hamelin as a versatile virtuoso.

Hamelin will open the program with a reading of Haydn’s Andante and Variations in F Minor, Hob. XVII: 6. It is hardly a technically demanding work, but under his hands I expect to hear a clear, tidy interpretation that is his signature. It is followed by Mozart’s Sonata in A minor, K. 310, which should heat up the room a little bit. Pyrotechnics are an essential part of the equation with Liszt’s Venezia e Napoli, but Faure’s indulgent and sweet Nocturne No. 6, Op. 63, will bring back calmness to the hall before the intermission. Hamelin will have guided us through a century of piano works to show off his versatility and flexibility, and that would make a nice, short recital by itself. But the whole raison d’être of the evening is in the second half of the program.

What awaits us then is a rare performance of the Symphonie for Solo Piano by an enigmatic Parisian composer, Charles-Valentin Alkan. A contemporary of Liszt, and a neighbor of Chopin, he spent much of his life as a recluse. He left an extensive collection of piano music, from short miniatures and a grand sonata to a collection of monstrous études that dwarf those by Chopin, Liszt, and Debussy, all combined. The work in question is actually a part of Twelve Ètudes in Minor Keys, Op. 39.

Given its title, the work demands that the pianist create an illusion of a full orchestra, with the widest possible range of dynamics and gamut of tonal colors, on a single instrument and with just two hands. It was not a written as a transcription, though orchestral instruments are implicitly specified within the score. It is also doubtful that Alkan intended it to be orchestrated, given that he followed the work with an hour-long concerto for solo piano. There have been very few pieces like it before it or even after it, though many innovations contained in the work were then mimicked by Liszt, Brahms, and other later composers.

Marc-André Hamelin is among a handful of pianists, living or dead, who is or was truly capable of performing the piece justly. He is certainly one of the more important super-virtuoso pianists of the day; still, his virtuosity comes not from his athletic velocity, but rather from the communicative art he makes through the instrument, while keeping himself transparent in the process. There is no finer living example of such virtuosity today, and Hamelin’s program that we will hear has reached the pinnacle of the art form. It is an event that any and all serious lovers of piano music must attend.

Mill Valley Chamber Music Society
Eric Himy, Reviving the Piano Transcription
BY Ken Iisaka
American pianist Eric Himy has carved out a niche in an intriguing way. Although highly acclaimed for his interpretations of Ravel, Debussy, and Liszt, he has played and recorded many works in his own transcriptions for piano. 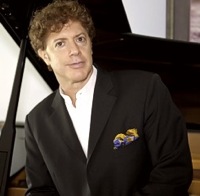 The transcription, in which the player couples the range and power of the keyboard with razzle-dazzle technique and contrapuntal ingenuity in order to conjure an orchestra or other large ensemble, used to be a standard item in the virtuoso pianist/composer toolbox, though it’s rarer today. Guitarists still make transcriptions for their instrument all the time, but pianists seem to want to play what they’ve been given, since the repertory is so large. So when you see the name Gershwin on a Himy concert, you might be getting the songs and preludes, or one of the Rhapsody in Blue arrangements — then again, you might not. Here is a highly imaginative artist who is continuously seeking fresh perspectives and expanding possibilities.

Himy’s upcoming recital, on Nov. 15 for the Mill Valley Chamber Music Society, should be a delight for the senses. Titled “Gershwin in Paris,” the program will open with his own transcription of An American in Paris, followed by four Debussy preludes. The program alternates between George Gershwin and Claude Debussy, seemingly casually.

The program invents a conversation between Debussy and Gershwin that never took place in reality. Imagine the two composers sitting, one warm, Sunday afternoon in autumn, at a café in Paris with a piano in the corner. One plays one of his compositions, then the other follows — not as a challenge, but to complement the other. The banter goes on, the two take a break with a glass of absinthe, and then continue.

Himy’s transcription of Debussy’s Prélude à l’Après-midi d’un faune opens the second half, a symmetrical contrast to the first half. The three Gershwin Preludes are followed by Debussy’s tip o’ the hat to ragtime, “Golliwog’s Cakewalk,” from the Children’s Corner, in Himy’s homage to Gershwin.

Then, an unexpected guest strolls into the imaginary café. Being a natural showman, Franz Liszt sits down and seduces the female patrons with his Liebesträume and launches fireworks with the “Mephisto” Waltz No. 1. The awed audience, including Debussy and Gershwin, would drop their jaws, I’d imagine. Yet Liszt belongs here, not just as the most important daddy of modern piano technique, but also as the grand master of transcription.

While Eric Himy may make you think about all the possible connections in the music he programs and plays, like Liszt and other old-time virtuosos he doesn’t forget to bring the sizzle.

In difficult times, there are few things that give me as much joy as listening to music being performed for nothing other than the love of it. Luckily, in the Bay Area, we can take advantage of a lot of free or cheap, live music and occasionally encounter, in a humble environment, extraordinary artists worthy of much higher profile and recognition.

Pulling Listeners Into Her World
BY Ken Iisaka

North Bay fans of piano music are a lucky bunch. For the past six years, the Concerts Grand series, produced by Terry McNeill, has been presenting piano recitals primarily in Sonoma, attracting established as well as upcoming talents from near and far.