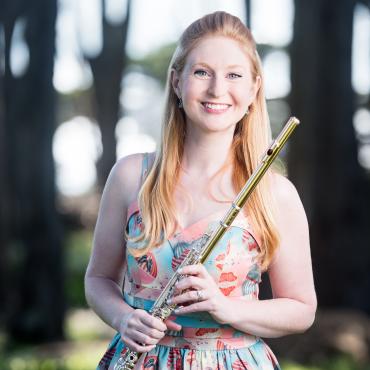 Hailed as a “strong and focused” artist by the Santa Barbara News-Press and praised for her “sensitively realized” performances by CASA Magazine, flutist Abigail Sten Graham enjoys an active career as a performer, teaching artist, and entrepreneur.

A passionate performer, Graham has performed with the North State Symphony and has held the second flute position with the Channel Islands Chamber Orchestra and the YMF Debut Orchestra in Los Angeles. As a recording artist, she can be heard on the Human Error Music label as a member of the traditional Irish music ensemble Dannsair.

In demand as an instructor, Graham created the Play Flute online flute school in addition to managing a large flute studio in San Mateo. She spent several years as Lead Artist-in-Residence for the San Mateo-Foster City School District, where she worked closely with more than 1,000 young flute students. She is currently the Vice President of the San Francisco Flute Society, where she served as Director of the 2014 San Francisco Flute Festival.

Graham is a nationally competitive flutist, winning first place in the Baldwin Wallace Orchestral Audition Competition for two consecutive years and second place in the Rio Hondo Young Artists Competition. In 2017, Graham gave a solo performance at Carnegie Hall’s Weill Recital Hall as a first-place winner of the American Protégé International Woodwinds and Brass Competition. She was a winner of the National Flute Association's Convention Performers Competition in 2018.