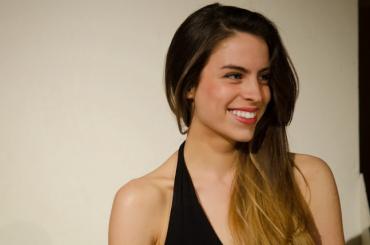 Growing up in Seattle, Elizabeth Boardman began studying piano at age four and viola, under the instruction of Michael Lieberman, at age nine. When she was fourteen, she studied with Michael Lim, Principal of the Corigliano Quartet and Concertmaster of the Pacific Northwest Ballet Orchestra, and continued with him until graduating from high school.

In 2013, Elizabeth completed her BMus Viola Performance (Honours) degree at Trinity Laban Conservatoire of Music and Dance, London, where she studied with Violist Matthew Jones. She also received masterclass tutelage from Maxim Rysanov, Helen Callus, Rivka Golani, and Illan Schneider. In 2010, she was awarded the Bank/Kurtz Viola Prize. As a founding member of the Trafalgar Trio, she has taken part in numerous chamber music concert series throughout England. In the Spring of 2013, Elizabeth was selected to be a part of the K12 collaboration project with the Krakow Academy, performing as the violist of the chamber orchestra in Britten’s War Requiem in Poland.

While her focus is primarily on viola performance, she has also studied composition with Stephen Montague. One of her compositions was chosen by the Xperides Ensemble for a performance in the Sede de Arucas Festival, Canary Islands in 2011. Elizabeth is currently in the middle of recording her original score for filmmaker Zoe Furlong's silent film, "The Monk".

In addition to teaching for Creative Music Adventures and the Seattle Music Partners, Elizabeth taught viola, violin, and piano studies privately in Seattle. She will be pursuing her Masters of Music this Fall (2015) at the San Francisco Conservatory of Music where she will be studying with violist Jodi Levitz.

BMus (Honors) from Trinity Laban Conservatoire of Music and Dance, London and currently working on MMus at SFCM.

Years Teaching:
2
Lesson Rate:
$40 for a half hour, $60 for an hour, additional fee for travel
Teaching Method:

I would like to make the string learning experience as well rounded as possible. I am a firm believer in the idea that lessons with a certain degree of student-­‐teacher collaboration are most productive. This approach allows the student to be truly involved in problem solving and can really help to jumpstart their creativity as well as allow them to develop their own music ideas and tastes. Through our lessons we will learn to... • Find enjoyment and fulfillment in music making • Play the instrument proficiently without developing physical strains • Develop music reading and aural skills equally • Think critically in order to have efficient practice • Develop the listening skills required to fully appreciate music as well as develop your own musical ideas, taste, and style • Build the confidence required to pitch musical ideas as well as constructive criticism to peers • Explore writing music for themselves and others to play • Enjoy the rewarding experience of making music with others!