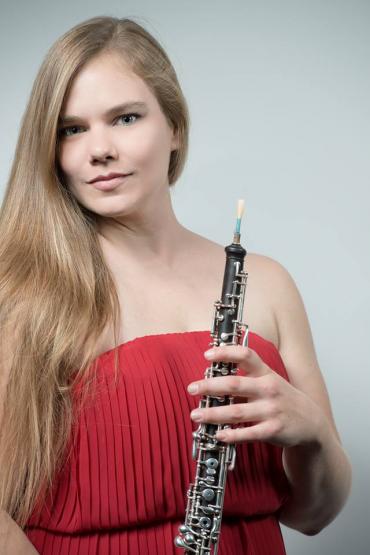 Glenda Bates is a multi-faceted musician and teacher whose specialties include chamber music, orchestral repertoire, jazz, historical performance, and contemporary classical works for oboe and English horn. She is an active freelancer in Baroque, Classical, Contemporary, and Jazz ensembles, and is frequently sought out by contemporary composers to perform new works for oboe and English horn.

In addition to playing jazz oboe and English horn, Glenda is an accomplished vocalist and vibraphonist who has performed with Ray Anderson, Adam Theis, Eldad Tarmu, Bert Ligon, Rafi Malkiel, and Jenna McSwain.

A well-rounded performer, Glenda is an enthusiastic and creative teacher. She has held a private oboe studio since 2003, with students ranging from ages twelve to eighty-three, and also teaches voice and beginning piano lessons for children and adults. She taught undergraduate oboists while at the University of Maryland from 2008-2010, and has university classroom teaching experience in several areas of instruction including music appreciation, music after 1900, rock music, and jazz ensemble. She is

Glenda received her Doctorate of Musical Arts in Oboe Performance from Stony Brook University under the guidance of Professor Pedro Diaz, English horn soloist at the Metropolitan Opera. She earned her Master’s in Music from the University of Maryland, and her Bachelor’s degree from the University of South Carolina. Previous oboe teachers include Mark Hill, Rebecca Nagel, Carol Stephenson, and Susan Vought-Findley. She has also studied with Baroque performance practice with Marc Schachmann and Arthur Haas, and jazz with Ray Anderson and Bert Ligon.