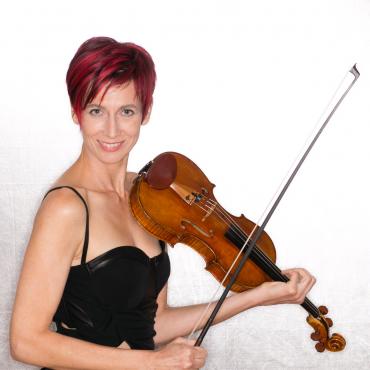 Gloria Justen is a versatile composer, violinist, and violist known for her dynamic, emotionally-charged performances. Her compositions have been performed by Philadelphia and San Francisco chamber orchestras. Featuring all original music, her first CD of original music, Four-Stringed Voice: music for solo violin was released in 2008, and her second CD, Sonaquifer: Music for Solo Viola, was released in January 2018. Gloria lives in San Francisco and creates work both for traditional concerts and for electronic music settings.
Through her teachers, Gloria is connected to a tradition of music-making that extends back through four centuries of European and American art music. Her principal violin teachers were Fredell Lack in Houston, Texas, and Szymon Goldberg at the Curtis Institute of Music, where she received her Bachelor's Degree in 1990. Gloria has performed and toured internationally with The Philadelphia Orchestra and The San Francisco Symphony (as an A-list Substitute Violinist) and she served as Concertmaster of the Chamber Orchestra of Philadelphia for six seasons. She toured with the Philip Glass Ensemble for the Book of Longing project, and she has played many works by other contemporary composers. Other musical activities include free improvisation on electric violin with DJs and electronic producers, creating soundtracks for modern dancers, collaborating with video artists, making her own field recordings in both urban and natural environments, creating electronic surround-sound collages, and experimenting with different sizes and alternate tunings of violins and violas.

Holistic and individualized approach. Each student is unique. I demonstrate proper form and phrasing and work with the student's unique physique and personality to develop their musicality. I believe in having fun while also aiming for the highest standards. We can work on the classical standard repertoire or more contemporary music, and I can also help a student to compose their own original music. I integrate ear training and an understaning of music notation into violin or viola lessons, and I can teach these subjects separately as well. I'm available to coach chamber music groups or to teach workshops or master classes.