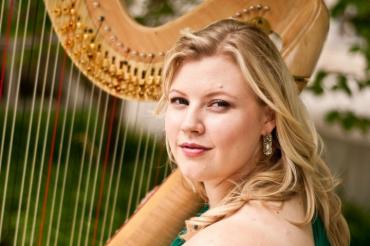 Meredith Clark is a versatile harpist, whose varied interests have taken her all over the world to perform as a soloist, chamber musician, and as part of an orchestra. From her international solo debut playing the Ginastera Harp Concerto at the famed Gewandhaus in Leipzig, Germany, playing as a member of an orchestra in Japan, and premiering contemporary chamber music across the United States, Meredith loves sharing her passion for music with others. Meredith currently resides in San Francisco, and performs with many orchestras in the Bay Area, including the San Francisco Symphony, as well as keeping a busy solo and chamber music performance schedule. She has performed for the San Francisco Symphony's education outreach program Adventures in Music, reaching all public elementary school children in the city. Meredith received degrees in Harp Performance from The Oberlin Conservatory of Music, and The Cleveland Institute of Music both while studying under Yolanda Kondonassis.