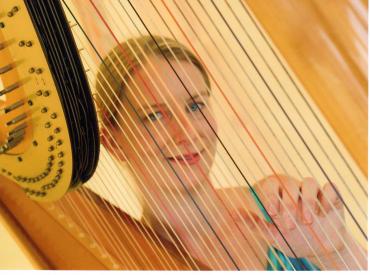 After reading Music at York University, UK, Sarah Goss took up a residency in Dubai, UAE, performing classical and popular music as a soloist and half of the Lorelei Flute & Harp Duo at the world’s first 7-Star Hotel. It was here that she began making her unique arrangements of modern pop songs, some of which feature on her 2016 Album ‘Engagements’. In 2002 Sarah moved to Bangkok, Thailand to help establish and teach in the Tamnak Prathom Harp Centre. There she wrote teaching material for the centre and gave recitals at the Siam Society, the Dusit Thani Hotel and the Tamnak Prathom Palace and performed with the Bangkok Symphony Orchestra. In 2013 she returned to compere the 2nd International Thai Harp Competition. Sarah has performed all over the British Isles and has also played in much of Europe and also in the USA. She has appeared on national television in the UK, Greece, the UAE and Thailand.  Until recently Sarah was based in Oxford, England for where she regularly gave solo, duo and chamber music recitals, appeared as a concerto soloist, performed with various orchestras and ran a thriving teaching studio, regularly putting on masterclasses and workshops for her students. Autumn 2016 brought a move to San Francisco and the beginning of an exciting new chapter where she continues to enjoy playing and teaching the harp.