What do an archaeologist, a lawyer, and a black belt in jujitsu have in common? They may sound like the beginning of a bad joke, but in reality they're a sampling of the Bay Area's choristers. The hundreds of vocal ensembles in Northern California (the SFCV complilation of Bay Area Music Groups lists some four dozen) are just as varied as their members, covering every imaginable genre, venue, and level of performance.

There's a Tibetan saying that if you can speak, you can sing. Clearly, some sing better than others, but a lack of expertise is no reason to limit vocalization to the shower or the morning commute. According to Polly Winograd Ikonen, who sings with the Pacific Mozart Ensemble, "If you like to sing, whether or not you're really good is almost irrelevant. There are choruses of all levels everywhere." 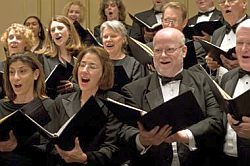 Particularly in larger choruses, there's room for singers with little formal training. In the Marin Symphony Chorus, for example, member Kaneez Munjee estimates that fewer than half the vocalists have a degree in music or practice musical professions. "Most are people who sang in college, or in a church choir, or some group at some point in their lives," she explains. "They have experience, but not necessarily formal training. A very small percentage of the people are full-time musicians."

For those who still have their doubts, Lisa Hirsch of Chora Nova offers this advice: "Few people actually have ugly voices, and a little voice training for someone who lacks confidence or experience can go a long way. I believe it's possible for most people to learn to sing well enough to join a chorus."

The prospect of an audition may also seem intimidating. Some ensembles, like the Berkeley Community Chorus, don't require an audition at all. Most groups do, but in many cases it's less a matter of determining who's good enough, and more about establishing voice types (tenors and basses are usually in demand) and skill levels. Once the auditions are over, singers find themselves in a new musical community. "Singers in professional choruses come from different backgrounds," says Tom Busse, who sings with several professional choruses in the area, "and might not be a natural social mix outside the choral environment. They all share a love and commitment to choral music, and this binds them together."

The individual experience of singing in an ensemble can be most gratifying, as well. "Singing is a very direct physical pleasure for me," Hirsch explains. "A chorister is inside and surrounded by the music in such a personal way."

"Something about raising your voices in song together is such an amazing, nurturing thing to do as a human," Ikonen adds. "It's astonishing to me sometimes."

Choruses give singers of virtually all skill levels the opportunity to make music and become familiar with new genres. They also expose their audiences (often swelled by the singers' families and work colleagues) to a broad repertoire of music. "I developed as a musician because I was exposed to good choral music," says Busse, "and I think having a model at a young age is the best way to cultivate singers." Really good choruses inspire the next generation of vocalists to start singing — and amateur ensembles give them experience that can help them develop into great choristers.

Ensembles for All OccasionsOddly, some ensemble names can be deceptive. The Pacific Mozart Ensemble, for example, rarely performs Mozart. "PME is probably best known for being uncategorizable," says Ikonen. "This is one of the things that really appealed to me, and one of the greatest challenges of singing in this group." In one season the choristers might be expected to perform classical masterworks, jazz, spirituals, new music, and pop. These genre shifts are possible because the 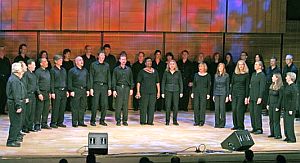 Other groups, such as the Berkeley Broadway Singers or the San Francisco Renaissance Voices, are exactly what their names imply. The makeup and repertoire of a choir may be based on a genre or time period, location of the rehearsals, or demographic identity. Groups like Labor Heritage/Rockin' Solidarity Chorus bring together musicians who belong to workers' unions.

Ethnicity and language are also common identifiers for ensembles (to wit, the Norwegian Singing Society, the Yiddish Choristers). And gay and lesbian choruses are a growing phenomenon nationwide; many participate in national songfests involving thousands of singers from the 148 GALA Choruses around the globe.

With so many types of ensembles to choose from, how do you decide what choir or choirs to sing with? Finding the right fit is important — if all choirs were the same, there wouldn't be so many of them concentrated in the Bay Area. "Although they're made up of individuals," Ikonen explains, "each ensemble has its own personality and culture. A little shopping is good for people looking to join." Munjee describes how the process of looking around for the right ensemble might work. The first step is to simply attend a variety of concerts, and see whether the performance, the style, and the repertoire seem appealing. If they do, then step two is to try singing with the group.

"You can always give it a shot," she says, "and if it doesn't feel right, you'll know what about it wasn't right." Munjee emphasizes the importance of knowing what one hopes to get out of the experience. "It's important to find something that has the potential to be a good fit. You have to know what you're getting into; you have to do a bit of research." Things to consider include the size of the ensemble, the types of repertoire it performs, how much of a time commitment is expected, wardrobe costs and member dues (if any), and what the performance venues are like. Some singers are not performance oriented, and there are choirs to suit their needs, as well. "I'm not particularly afraid of or particularly thrilled by the experience of performing," Hirsch admits, "which I know is a little unusual — so many people live to perform. What I care most about is learning new and interesting music, and working with good conductors."

That's the bottom line for most choristers — it's about the music. "It's the one nonnegotiable element in my life," says Ikonen. "No matter what is going on, I have to sing." She's not alone in this sentiment; the choruses in the Bay Area are made up of thousands of singers. "It's such a huge community," she adds, "and so meaningful for so many people. It speaks to the richness of culture here in the Bay Area."