Being funny, it seems, is serious business. Many years ago, I prepared an audition piece for a critique by an acting coach. My tastes in selecting arias and songs ran to the lugubrious, and someone suggested Dinah’s aria from Bernstein’s Trouble in Tahiti. As I was singing it for my coach, I noticed she was laughing her head off.

Now, in spite of the fact that the aria was supposed to be lighter than my usual fare, I took it very seriously. Dinah is relating a movie she has just seen and hated, but as she tells the story, ornamented with appropriate gestures and funny voices, she falls increasingly under the spell of the corny romance she’s parodying. I felt she needed that romance, and I took the funny voices and gestures not only as her attempt to enliven her narration, but also as containing — both hiding and revealing — her despair, and those layers of feeling came into my singing. And yet my coach laughed. When I asked her why, she said, “You were so funny!” I said I didn’t think so. “That’s why you were funny,” she explained. 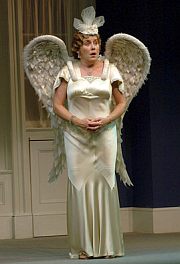 was not expecting this reaction from my audience of one. Yet because I took the character seriously and didn’t try to be funny (which I might have done), comedy is what came out. Go figure.

This paradoxical lesson of long ago came back to me at the recent A.C.T. production of Souvenir: A Fantasy on the Life of Florence Foster Jenkins, by playwright Stephen Temperley, with the talented singer/actress Judy Kaye in the title role. Kaye played the part — a tone-deaf society matron who was a terrible singer who thought she was wonderful — strictly for laughs; exaggerating the character’s outrageous singing, her pitch and rhythm faults, her scoops and squawks. The audience laughed, but I didn’t.

Why didn’t I think she was funny? Because Kaye wasn’t giving us a real character. She was giving us farce, not an understanding of the character’s feelings. Only once — when Jenkins’s accompanist, frustrated with her incomprehensibly stiff-necked denial that she was singing wrong pitches, burst out, “You silly woman!” — did the character show us anything that would allow a human connection with her: She crumpled. But the accompanist, mortified at what he had done to her, cajoled and wooed her back to her former intransigent self-assurance, and any possible human connection to her was lost 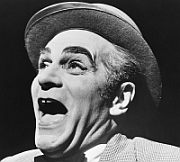 What would have happened if Laurence Olivier had played Archie Rice, in the 1960 movie The Entertainer, simply as the second-rate music-hall comedian that he is? We might have laughed at Archie’s schtick (or maybe not, because he wasn’t very good). Great actor that he was, however, Olivier invested the character with level upon level of irony, bitterness, even cruelty, and the full thrust of the comedian’s very unfunny personality allowed us to recognize that this man could never be funny, no matter how hard he tried, and he knew it. Whereas his father, Billy, a retired music-hall comedian, given a very brief scene singing an old song for his friends in a pub, was in his element, a natural, schtick and all. Olivier's Archie hated every minute onstage, trying to make people laugh. “I may look happy to the audience,” he says to his daughter. “But look at my eyes: They’re dead.” Do we laugh at Archie or pity him? Either, or both; it’s a multilayered, therefore human, connection. 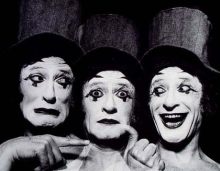 The supreme example of comedy’s “other side,” and the subtle interplay between comedy and tragedy remains, for me, one of the great mime Marcel Marceau’s most successful, most affecting skits, the Mask Maker. In it, the character delights in trying on his masks of Comedy and Tragedy. He replaces one mask with the other, faster and faster, his facial expression registering first the wide smile of Comedy, then the downward-drooping expression of Tragedy, and in between them the mask maker’s own neutral expression. It is a technical tour de force that makes us gasp with pleasure.

Suddenly, the character is unable to remove the Comedy mask. He tries harder and harder, but he cannot take it off. At first we take this as a continuation of the fun, but as his attempts grow increasingly frantic, we recognize the tragedy his anguished body is conveying; all the while his face, still smiling, is locked forever in a comedic mask that now looks, to our eyes, more like a terrifying grimace.

Ambiguity, irony, reversal are often elements of comedy. If the performer believes in the character, the same elements can take the audience to a deeper, tragic, level, where we and the character share an interplay of human complexities. These are the moments I treasure in the theater.

Stephanie Friedman, mezzo-soprano, is retired from more than three decades of singing in opera and concerts in the U.S. and abroad.