Chatting with subscribers who have been with her for all of her ensemble’s 17 seasons, Barbara Day Turner had her mission confirmed. “They’re noting how much being constantly exposed to different things has changed how they listen to music,” Turner reports. “And how it’s changed their tastes.” 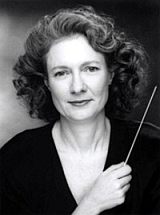 Her San José Chamber Orchestra’s May 17 concert at Le Petit Trianon assembles 17 string players in a breadth of emotion as well as chronology. The evening begins with 18th-century contemporaries Luigi Boccherini and Franz Josef Haydn, and continues with a pair of world premieres by the Bay Area’s William Susman and Anica Galindo, and for good measure a couple of 20th-century hits by George Gershwin and Dave Brubeck.

As music director and conductor, Turner’s success in championing new music (including more than 75 world premieres) last year earned the SJCO a first place ASCAP Award for Adventuresome Programming. Her advocacy of new music is also reflected “by the amount of scores that find their way to my front door, unbidden. It’s magnificent and sort of frightening at the same time.” That is, until she and the ensemble get familiar with the “language” of composers like Susman and Galindo, whom she has showcased before.

Their two new works are “actually sort of opposites,” says Turner. With Galindo’s Trinitas, the first part of a commissioned trilogy, “you have an extremely lyric piece that uses strings sort of in the way that Barber does in the Adagio, but not at the upper extreme so much. She uses larger blocks of sound, creating a really rich and warm texture.”

Zydeco Madness, in the words of Palo Alto composer William Susman, is “a response to and a reflection on Hurricane Katrina: the disaster, the tragic events that transpired during and after, and the lack of response to the people.” The title implies a connection to the popular music of the black Creoles of Louisiana, and to that music’s lead instrument, the accordion. The piece was presented in Chicago last month in a solo accordion setting, as performed by Russian virtuoso Stas Venglevski, and has been reset with the SJCO functioning “like a giant accordion on steroids,” in Susman’s words. The composer’s notations on the score reflect his approach to depicting the tragedy, setting out with rapid phrases of “Flowing Hell,” slowing with “Marooned,” and building to a “Hysterically Grinding” emotional high point. Susman, who had grown close to the bedeviled area during his student days at Tulane, evokes the funkiness of zydeco and the wail of Katrina through extensive use of Sul ponticello bowing, tremolo, and other dramatic techniques.

For Turner, the other pieces of her May 17 program are linked with the new compositions in that they all convey “the concept of spirit.” The Boccherini, arranged by Michael Touchi, reflects “the particular flair of Spanish dance” through the eyes and ears of a classical Italian. Touchi’s arrangement of Haydn’s “Emperor” Quartet transports the listener to the “incredibly elegant Austrian spirit” of the late 18th century. Gershwin’s Summertime (arr. William Zinn) and Brubeck’s Blue Rondo à la Turk (arr. Jeremy Cohen) will end the evening in “a quintessentially American spirit,” with evidence of the rewards of cross-pollinating genres.