Firm Hand at the Tiller

George Cleve is best-known these days as director of the Midsummer Mozart Festival, but in person, with his beard and his solid presence at the podium, he looks rather like Johannes Brahms. Born in Vienna, though long a resident of the Bay Area, he’s a conductor who actually specializes in both these great Viennese composers. 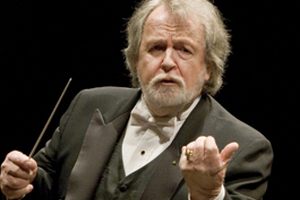 But it’s Brahms that Symphony Silicon Valley listeners will be hearing in the California Theatre on March 26-29. The great Violin Concerto that Brahms wrote for his close friend Joseph Joachim in 1878 is the music. This “symphonic song for the violin,” as one critic called the work, is Brahms at his most expansive and lyrical, and it has a flamboyant, Hungarian-gypsy rondo finale tailor-made for the talents of soloist Ju-Young Baek. A young woman with one of the richest and most powerful violin tones I’ve heard from anybody, male or female, she has been a strong and passionate performer with SSV in music by Sibelius and Piazzolla. The Brahms is long, and hard to play, but violinists since Joachim have found it enjoyably worth the trouble.

Who goes better with Brahms than his friend and protégé Antonín Dvořák? The SSV Web site calls the Symphony from the New World “a thoroughly European work,” but it’s really not. Dvořák picked up more than a superficial view of America during his residence here in the 1890s. In his “American” works he abandoned the rhapsodic, unevenly accented style of his Czech homeland and tried for something plainer, foursquare, and rhythmically symmetrical, befitting his view of the American landscape and peoples. You can trace a little of the open harmonies and precise rhythms of Aaron Copland back to this work.

But of course it’s beautiful, as well, and no more so than in the famous theme for English horn in the slow movement. Many listeners hearing this think, “Oh, it’s just a spiritual that the composer borrowed,” but that’s rather like seeing Hamlet and thinking, “It’s just a collection of quotations.” In fact it’s Dvořák’s own theme, which was later adapted into a spiritual. SSV’s English horn player Patricia Emerson Mitchell might tell us something about preparing for this work on her blog.

Something less central-European, Hector Berlioz' Roman Carnival Overture also contains an important English horn solo. The work is a potpourri of catchy bits from an opera, one of many works Berlioz wrote recalling his sunny student-days in Italy. The orchestration is bright and the themes are attractive, though the piece needs a firm hand from the conductor if it’s not to wander around aimlessly. George Cleve is more than capable of providing that firm hand — and Symphony Silicon Valley can respond to it.

Don’t miss the preconcert lecture in the main hall an hour before each program. Usually given by cellist Roger Emanuels, who’s retiring at the end of this season, or by violist Janet Sims, it provides a welcome, musician’s-eye view of the program and a gentle introduction to the music.