It is a season for anniversaries at Berkeley Opera. This year is the company’s 30th season, which will be celebrated at a star-studded gala on March 29, featuring soprano Ruth Ann Swenson. Their current production of Jacques Offenbach’s Tales of Hoffmann, at the Julia Morgan Center for the Arts in Berkeley through March 8, marks the 10th anniversary of the company’s premiere of librettist David Scott Marley’s adaptation of that work. 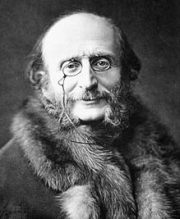 The opera’s title is, aptly, plural, for the show has taken many forms since its 1881 premiere. Offenbach died in 1880 while the opera was in rehearsal. Ernest Guiraud completed the last two acts (the Venetian act and epilogue). Offenbach had made extensive sketches and notes, some of which were probably lost the following year in a theater fire, making his intentions for the work even more mysterious. He also had made two versions: one with recitatives for the Théâtre de la Gaîté-Lyrique, and, when that production fell through, another for the Opéra-Comique with spoken dialogue. (In the Berkeley Opera version, spoken dialogue is used, shortening the piece and, according to Marley, better suiting the size of the intimate theatre.) But at the show’s premiere, various cuts and changes were made, and further revisions and additions were made in the 1904 revival, which is now the standard one produced by opera companies.

Based on an 1851 play by Jules Barbier and Michel Carré and also stories by E.T.A. Hoffmann, the opera depicts Hoffmann’s love affairs with three women: Olympia, Antonia, and Giulietta. Over the years, the three acts have been presented in different orders and the three heroines sung by three singers, giving the evening almost the feel of three one-act operas. In this production, as is sometimes done, the three heroines (four if you include Stella, Hoffmann’s love interest in the prologue and epilogue) are sung by one singer, Angela Cadelago. Paul Murray takes the roles of the four different villains.

What Dreams May Come

The artistic team of stage director Phil Lowery, librettist Marley, and musical director Ernest Frederic Knell employ other elements to unify the three disparate acts. Hoffmann’s Muse, omitted in some versions of the opera, becomes Hoffmann’s sidekick Nicklaus during the fantasy acts and is sung here by Nora Lennox Martin. In the prologue, she explains to the audience that she has sent Hoffmann three dreams to help him see through his romantic illusions about the singer Stella, and reconnect with herself, his one true love, his muse. The staging also stays within the setting of the tavern where the prologue and epilogue take place, making use of smaller sets within the set rather than re-creating an entirely new scene for each act. The change emphasizes the drama within Hoffmann’s mind (while observing practical and budgetary constraints).

Marley points out that Barbier was writing the libretto just as the science of psychology was being developed, so perhaps Sigmund Freud and the exploration 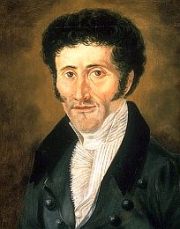 of dreams were present in the writer’s consciousness. The historical E.T.A. Hoffmann was a pioneer of fantasy fiction and best known as part of the school of German Romanticism. He suffered from both alcoholism and syphilis, and is rumored to have had hallucinations and shifting realities. As a nod to this, the Muse enters the tavern from inside a large wine barrel, and later says: “Last night, while he lay drunk, I sent him dreams to show him truth.”

The struggle between the writer and his muse is, according to Lowery, the central story of the opera. He describes the character of Hoffmann, sung in this production by Adam Flowers, as “a crazy romantic.” His illusions are so tenacious, Lowery explains, that in the first act, when the scientist Spalanzani presents his creation, the automated doll Olympia, Hoffmann sees her as a real woman, through rose-colored glasses, while the assembled crowd views her as a marvel but by no means human.

The real-life Hoffmann seems to have feared that technology was taking over as society became industrialized, and his fascination with objects’ becoming enchanted is present in much of his work. As Lowery paraphrases one of the writer’s letters, “Can you imagine men being able to create a mechanical doll with mechanisms and gears so that they would not be able to distinguish her from the real thing? Can you imagine the horror?!”

The juxtaposition between emergent technology and the much more human, romantic themes are in part what led Lowery to use as a palette for this production the increasingly popular aesthetic of “steampunk.” Originally used as the name for a type of speculative fiction writing, the term now refers to artistic works and fashions incorporating the aesthetics and elemental limitations of the 19th century with more-modern concepts or futuristic fantasies. This usually includes the styles and technologies of Victorian England, mainly steam power and clockwork technology. Current manifestations might be the writings of William Gibson, the films Time After Time, The City of Lost Children, and The Wild, Wild West. 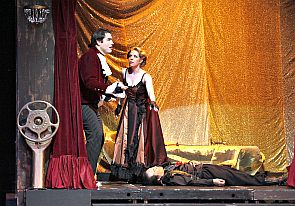 For this production, it includes the presence of Victorianesque costumes with various gadgets and set pieces that give simultaneous nods to both old and new, like a remote control crank, complete with joystick, for the doll Olympia. Also, since this version includes the often-omitted “Violin Aria” for Nicklaus, Robert and Lorna Shashinda of the local Bear Paw Fiddles created a special “Steampunk” violin.

Delving thoroughly into the passionate nature of creative energy, Hoffmann’s romanticism seems to win out temporarily in Act 2 as music and love reunite him with his music student, Antonia. He is determined to see it as a great love affair, but Lowery argues that it is probably only a student’s normal infatuation with a teacher. In any case, artistic expression proves destructive, as Antonia’s singing leads to her demise.

Lowery says that in the case of Act 3 “Hoffmann really gets suckered in. He starts out cynical, even calling Giulietta a whore, but he’s objecting too much. What he wants more than anything is the romantic ideal, and as soon as she presents as a damsel in distress, she suddenly becomes the woman he’s always wanted.” This act delves into the deepest corners of the psyche, refers to commercialism and manipulation, and comes the closest to the Muse’s greatest fear. Hoffmann’s passion for Giulietta nearly costs him his soul, or at least his reflection.

By the time the epilogue is reached, the Muse’s dreams have worked on Hoffmann as the Ghosts of various Christmases worked on Scrooge. Hoffmann seems to have learned his lesson, and his passion once more is for writing.

You can see and hear for yourself which of these tales you prefer: Romance, Music, Truth, Illusion, Art, or Science. Tales of Hoffmann will be performed in English, with English supertitles, March 4 at 7:30 p.m.; March 6 at 8 p.m.; and March 8 at 2 p.m., at the Julia Morgan Center for the Arts in Berkeley.