Leaving the Past Behind

La traviata, which opens June 13 in San Francisco Opera’s summer-season run, is a daunting opera for the soprano performing the role of Violetta Valery. Before the singing even begins, the overture has already foretold of a mixture of transport, anguish, and doom that the protagonist must actualize. 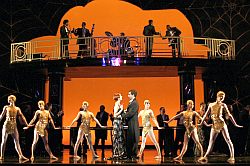 Every soprano remarks about the difficulty of the first-act aria, “Ah, fors’é lui” (Perhaps he is the one); it comes careening down the stage much too soon, before the singer has had a chance to become fully warmed up. Its first section contains delicate, reflective musings about whether she has finally met a man who would be able to save her from her life as a courtesan — a man who could love her enough to forget her past. This interlude is followed by an explosion of cynicism and irony, cast in the most hazardous vocal writing that Giuseppe Verdi could muster: high C’s, high D’s, coloratura ... the works, speeding along to the finish, when, if she can still cope with it, an optional high E-flat awaits her. The singers who can manage with “ease” the vocalism necessary at this point are likely to lack the dramatic quality needed to convey with full force the emotional impact of what is yet to come.

Add one more key requirement: physique du role. An essential element of Violetta’s capacity to win and retain the devotion of many men of wealth and distinction, both in fiction and in reality, was her dazzling beauty. She was set apart from others also by what her creator called “her distinction of manner, her spirited conversation.” She was said to possess “elegance to the highest degree.” “She was thin and pale and had magnificent hair down to the ground.” “Her fine skin marked by blue veins indicated that she was consumptive. She was no common woman of ill repute.”

Violetta played the piano well, enjoyed the theater, and spoke excellent French. It was her combination of beauty and natural tact, along with refinement, that attracted, and retained, her many prominent friends. The soprano who essays this role must, ideally, master not only Verdi’s excruciatingly demanding vocal line and the tale’s powerful emotional thrust, but also the challenge of portraying, with convincing elegance, the image of the intriguing and beautiful demimondaine Violetta.

Then there is also, of course, the task of confronting the greatest soprano phrase in all of Italian opera: “Amami, Alfredo” (Love me, Alfredo). Here Violetta is facing the sacrifice of her great and consuming love for a noble cause. This is a phrase that requires such emotional grandeur from the protagonist that the audience must either scream “Bravo!” or be brought to tears. (I have witnessed both these effects, fortissimo.) Sarah Bernhardt was famed for her portrayal of this role, in the play La Dame aux camélias by Dumas (the son). When the renowned Italian actress Eleanora Duse put herself in direct competition by performing it in Paris, she was said by the critics to be “interesting and pathetic” but was characterized as being “too middle class, too remote” to play the demimondaine. Even the great Duse could not measure up to the task.

The woman Violetta Valery (her operatic name), alias Marguerite Gautier (the play name), alias Marie Duplessis (the courtesan name), née Alphonsine Duplessis (her birth name) actually lived and died in Paris and now lies buried in the Montmartre Cemetery. She was likely prostituted at a young age by her sodden father. She was driven to sell herself “because honest work would never have brought me the luxury I craved for irresistibly; I wanted to know the refinements and pleasure of artistic taste, the joy of living in elegant and cultivated society.” 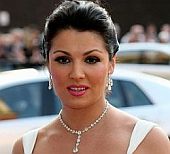 In the opera we have a thrice-removed fictionalized version of this fascinating woman. There was an actual, beautiful young courtesan in Paris who died in her early 20s of consumption. But in both the play and the opera she is given a “chance,” like Mary Magdalene, to redeem herself. She is driven to sacrifice her great love in order to save her lover’s family from the disgrace of association with her. More than with any other female in Verdi’s works, we can relate to this fallen woman who possesses, nonetheless, both elegance and grace, and moreover a noble heart,. But to make it happen for us, the prima donna must bring together immense virtuosity on many fronts.

The San Francisco Opera opening night (June 13) casting of La traviata looks most promising. If the stunning Anna Netrebko can come close to what she did with this role in Salzburg, it will be a thrilling event. I am unable to recall a better interpretation combined with such sovereign vocal control. A few equally thrilling snippets may be heard on old recordings — from the likes of Muzio, Olivero, and Zeani and of course Callas — and there is the Zeffirelli film, marvelous to look at, but not well recorded. Also available is the Covent Garden DVD with the excellent Angela Georghiu, but there’s nothing like the Traviata from Salzburg. Netrebko reaches into some dark desperation within, some unspoken self-violence, and thoroughly avoids the cliched and simplistic. This is one soprano who has it all.

Olivia Stapp is an opera director, formerly artistic director of Festival Opera 1995-2001, and has had a major international career as a soprano.