When it comes to classical music and opera, we enlightened ones are supposed to be color-blind. Regardless of our race, the racial characteristics of singers and musicians are not supposed to matter … some of the time.

Color doesn’t matter, except when it matters. When Leontyne Price made her U.S. opera house debut in 1957 at San Francisco Opera in the American premiere of Francis Poulenc’s Les Dialogues des Carmélites, and later brought the Met to its feet in 1961 when she sang in Verdi’s Il Trovatore under Fausto Cleva, no one was supposed to bat an eyelash. Yet how many of us have seen a production of Verdi’s Otello in which Otello, the Moor, was played by a white man without 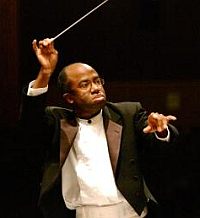 makeup, and his fair wife, Desdemona, the victim of his savage jealousy — I pick my words consciously here — was played by a dark-skinned African-American? Those who attended the Oakland East Bay Symphony’s concert version of the opera’s first act this past March did.

Then again, OEBS is no ordinary orchestra. Not only does it boast an African-American music director, Michael Morgan, and an African-American chorus director, Lynne Morrow, but it also makes a concerted effort to reach out to minorities through special themed concerts (such as last season’s Persian New Year concert). It also has an extraordinary educational program, and a full third of the symphony’s budget is spent on education; much of it focuses on the lower-income, minority segments of our community otherwise denied exposure to classical music.

In a phone interview about issues of racism, Morgan indicated that equal participation by racial minorities in classical music is by no means a given. “The African-American soprano I engaged to sing Desdemona, Talise Trevigne, didn’t even own the score when I approached her to sing the role, because she didn’t expect anyone to ever ask her to sing it. We had a big discussion about how I might be the only person who might ever hire her to do it. I would have cast a black singer as Otello, but I didn’t know any black tenors who were ready and available to sing the role.”

Actually, portraying white characters wasn’t always a piece of cake for Price either. African-American composer/ conductor/ baritone Milton H. Williams, long a pillar of Bay Area musical life, recalls that when the soprano first visited the Eastman School of Music to sing Tosca, many in Eastman’s Voice Department were offended.

“Why doesn’t she sing Aida instead?” was the question thrown at him. “Who’s been singing Aida all these years?” was his reply. 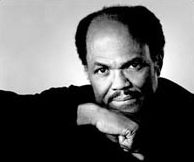 Clearly, Price was considered acceptable for the role of the Ethiopian princess Aida, but not for Tosca, a white Italian diva. And while Price did record Desdemona’s “Willow Song” and “Ave Maria” on one of her recital albums, she never sang the role onstage. Similarly, Ms. Price and fellow African-American soprano Leona Mitchell were cast as the slave girl Liu in Turandot, but the role of Princess Turandot is rarely, if ever, sung by an African-American.

Williams remembers the time at Eastman when he was cast in the Pilgrim’s Chorus of Howard Hanson’s opera Merry Mount. “I was happy to do it,” he told me by phone. “On dress rehearsal night, the head of the department came to do my makeup, and put me in white face. I was so crushed. The only redeeming thing I got out of it is that most of the photos and the pictures of me in whiteface were unusable, because the makeup photographed so poorly.”

One of Williams’ great-grandfathers was a full-blooded American Indian, while his great-grandmother was a slave. His father’s skin was dark and his mother’s extremely fair, yet he ended up far darker than his sister. To this day, he has relatives in San Francisco he has never met who pass for white.

“I love being who I am,” he says, “but the struggle has been tremendous. It’s all the luck of the draw. I would have loved the opportunity to have done all the things I’ve attempted to do without racism coming into the picture.”

Forum on Racism in Art 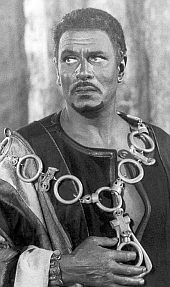 On Friday,May 2, OEBS held a free “Forum on Race Relations in Art” at the Downtown Oakland Senior Center. Using as a springboard the symphony’s recent performances of Otello and the musical Show Boat, which OEBS performs in an abridged concert version at the Paramount Theatre on Friday May 15, panelist G. Reginald Daniel, professor of sociology at UC Santa Barbara, raised a host of provocative questions. While similar questions can be raised about the discrimination faced by Latino, Asian, and other minority artists in the U.S., the forum focused specifically on African-Americans.

Daniel specializes in issues of racial identity, and has, since 1989, taught a course on multiracial identity in the U.S. His recent books include More Than Black? Multiracial Identity and the New Racial Order; Racial Thinking in the United States: Uncompleted Independence, with P. Spickard (eds.); and Race and Multiraciality in Brazil and the United States: Converging Paths? He serves on the Advisory Board of Project RACE (Reclassify All Children Equally). Daniel focused on the issue of miscegenation, the central theme of Show Boat. Why, he asked, was it not permissible for Julie, a singer of mixed race who passes for white, to embrace both of her backgrounds? Why did her society doom someone of mixed race to tragedy?

Tellingly, in the 1951 Technicolor version of Show Boat, Max Factor’s “Light Egyptian” makeup was used to darken the skin of Ava Gardner (as Julie), but “Dark Egyptian” was used on the fair-skinned “Negro” Lena Horne during an early screen test, so that no one would mistake her for white. Why couldn’t Gardner have played Julie without makeup? In fact, why couldn’t Horne have played either Julie or lily white Magnolia? (Not until 1983 did a black woman, Lonette McKee, star as Julie on Broadway. In the same year, Hollywood cast a woman of mixed race, Jennifer Beals, as a white woman in Flashdance.)

In some ways, the history of African-American singer, actor, and activist Paul Robeson’s involvement with Show Boat parallels the history of black-white race 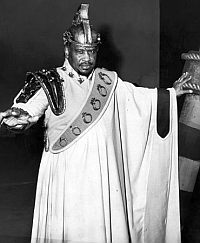 relations in the United States. The musical is based on Edna Ferber’s novel, which includes the following stereotypical description of one of the men who worked on the boat:

“A simple, ignorant soul, the black man, and a somewhat savage… All about him now were his helpers, black men like himself, with rolling eyes and great lips all too ready to gash into grins… His lips parted in a kind of savage and mirthless grin, so that you saw his great square gleaming teeth and the blue gums above them. Quick as a panther he reached down with one great black paw…”

Robeson worked hard to transform such images. As noted by panelist and UCLA Sociology Professor Paul Von Blum, who initiated the first course on Robeson in the U.S., when the artist first sang “Ol’ Man River” on Broadway, the verse began

By the time of the 1936 movie, Robeson had changed the lyrics to

Tote that barge and lift that bale, Git a little drunk and ya lands in jail. I gits weary and sick of tryin’, I’m tired of livin’ and scared of dyin’, But Ol’ Man River, he just keeps rollin’ along.”

Just a year later, when he performed the song in London’s Royal Albert Hall at a meeting for Spanish Loyalists (who were fighting General Franco in the Spanish Civil War), Robeson transformed the song into an anthem of resistance:

Tote that barge, lift that bale, You show a little grit an’ you lands in jail. I keeps laughin’ instead of cryin’, I must keep fightin’ until I’m dyin’, And Ol’ Man River, he just keeps rollin’ along.”

These lyric changes became permanent in Robeson’s subsequent performances of the song, as can be heard on one of Paul Robeson Jr.’s private recordings, released on The Odyssey of Paul Robeson (Omega Classics, 1992, out of print but available used here).

How About the Present?

As a white man who has been involved in movements for civil rights since 1965, I like to think of myself as progressive on these issues. Leave it to Michael Morgan and Lynne Morrow to gracefully provide a reality check.

“Things aren’t great right now,” Morgan noted toward the end of the forum. “It was better before.” When I pointed out from the floor that African-American 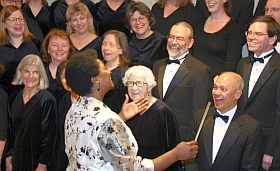 singers like Lawrence Brownlee seem to be doing quite well, Morgan cited the story of a black tenor who was recently offered the part of Tamino in The Magic Flute, only to find it rescinded once the opera company saw his skin color on an audition DVD.

Morrow followed suit, noting that when she was at Indiana University over a decade ago and Brownlee sang Tamino, the local paper published a furious Letter to the Editor that called a black Tamino kissing a white Pamina onstage an abomination. “I don’t even know if they actually kissed onstage,” Morrow commented.

“We are facing the same old issues,” she said in a subsequent phone interview. “There are biases spoken and unspoken in casting. When you cannot get cast for anything other than Porgy [in Porgy and Bess], you’re locked out. That’s the feeling people have, and it is some people’s experience. The Met just had its [125th] anniversary broadcast, and my mother called me to say that there were no African-Americans onstage!”

Morrow’s sister, Carol Morrow, has two degrees from Juilliard and was at one point considered one of the top cellists in the world. Yet despite wins at major competitions and a feature in Life Magazine, no one engaged her. How much of this has to do with sexism, or a combination of racism and sexism, cannot be determined. But, as Morrow points out, people of color who do not have the temperament to fight the nonmusical fights often give up and look for work elsewhere.

Morrow reiterated one of the dominant themes of the panel: As in all the productions of Otello where white singers have portrayed the Moor, casting should go the other way as well. People have to get racial pictures of characters out of their minds and look at the portrayal. Give young singers and musicians a chance to develop their craft.

When you have minority artists, instrumentalists and singers in the national and international spotlight,” she said, “what they go through that’s extra-musical is tremendous. People are always bringing up the story of temperamental Kathleen Battle without relation to the historical context in which she built her career. You have to remember that she was the only black person in virtually every professional situation. In my encounters with her, she was extremely generous and gracious with young singers. No one considers what people of color have to go through before they even have a chance to walk onstage.

When I was in the Midwest in music school, and I’d walk into the room, people would actually say, ‘Why are you here?’ The age of the “Model Negro” is over. People are not doing that any more. Everyone has to solve their own issues and problems and let artists do their work.”

We’ve still got a lot of work to do.

[1] This change in lyrics may be heard by comparing Robeson's 1930 and 1936 movie recordings of the song, both available in the box set, Paul Robeson: The Complete EMI Sessions, 1928-1939.
[2] Also see The Whole World in His Hands: A Pictorial Biography of Paul Robeson, Susan Robeson (Citadel Press), p. 37. Robeson's final lyrical transformations can also be heard in the four complete recordings and four medley versions he made of the song between 1947 and 1958. (See here.)